Hundred of women, students, activists and residents came out on a windy, sunny Saturday to participate in the 21st annual San Antonio International Women's Day March that celebrates women's achievements and calls attention to issues affecting minorities in the community and the world.

Bundled against a chilly morning and high winds, the marchers took off from Travis Park at 10 a.m. Saturday, March 5, carrying banners denouncing violence against women and calling attention to immigration, abortion and labor rights as well as hailing the democratic movements through the Middle East.

"I've been coming to this march for five, six years," said Brent Floyd, a political science professor at Northwest Vista college who brought his two young daughters to the rally. "I'm hoping as a dad I set an example. There's a whole litany of reasons why it's important to participate - women, gays, lesbians, whole populations are marginalized. We have a common objective in our opposition to war, to mysogyny."

NOWCastSA.com produced a video with interviews and highlights of the march that you can watch here:

The theme of this year's march was "Sin Fronteras, Mujeres Marcharan por la Paz Justicia and Solidaridad" (Without Borders, Women will March for Peace, Justice and Solidarity) to bring attention to U.S. immigration policy. But it also focused on domestic violence, the wars in Afghanist and and Iraq, the state budget cuts that could affect aid to women's programs and education.

International Women's Day has been observed since the 1909 when women in New York protested against working conditions in the garment district. The movement evolved to a fight for suffrage and into a campaign for peace in world wars as well as local efforts to address gender issues.

During the San Antonio march, NOWCastSA video journalist Sarah Garrahan produced these webcasts with her iPhone on the Qik service: 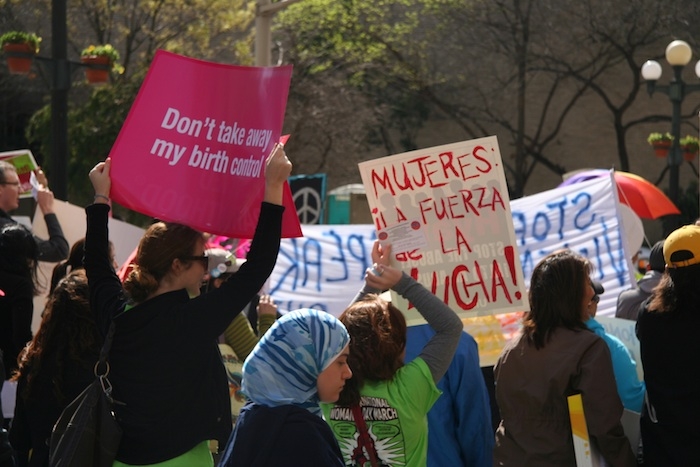