Watch video interviews with some San Antonio residents with this update.

Thousands of senior citizens from San Antonio and across Texas rallied on the steps of the Texas Capitol to call on Gov. Rick Perry and state legislators to use caution in determining which programs face budget cuts to combat an expected shortfall.

The Senior Day at the Capitol event on Tuesday, Feb. 8 was a response to plans announced by Perry and lawmakers to slash the state budget by $27 billion, cuts that could hurt programs that care for the elderly.

About 1,000 seniors from San Antonio participated in the event, one of the largest groups in the state, according to a staff member in District 5 City Councilman David Medina, Jr's office. Medina attended the rally, along with those residents who rode in buses to the Capitol.

The seniors said the state government should use the state's $9.4 billion "rainy day fund" rather than slash health, mental and hospice services.

The rally came as Perry gave his State of the State address at the legislative session, which began Jan. 11.

The state could be about $27 billion short in its upcoming budget, according to the state comptroller's office. The budget shortfall could reduce the amount of money given to extend social programs for the two-year budget cycle of 2012-2013. The shortfall is also expected to affect school districts, bracing for massive layoffs and increased classroom sizes. 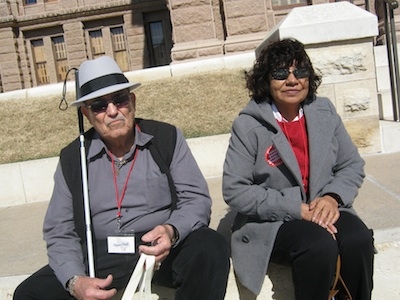