SA2020: Where the city is going and how we're going to get there

Mayor Julian Castro said he wants to know how San Antonians want to see the city grow over the next decade. Looks like he's going to get his wish.

More than 1,000 people have already signed up for the mayor's launch of SA2020 to help set the agenda on improving San Antonio’s quality of life during the next decade.

Hundreds of people are expected to pack the Tri-Point YMCA Saturday morning when Mayor Castro, Bexar County Judge Nelson Wolff and other civic leaders open the first public forum to hear ideas from residents about the future of the Alamo City.

Overflow crowds will be taken by shuttle bus to the nearby SAWS headquarters, where they can observe the session via the internet. Folks at home can still participate through NOWCastSA's livecast of the forum by simply clicking onto www.NOWCastSA.com and make their contributions via live chat.

SA2020 is a unique opportunity to tell the mayor and other government leaders how you envision San Antonio’s future _ what are our biggest challenges, what would you like to change and/or improve and what do want to remain untouched?

No subject is off limit, from education, transportation, the aquifer, jobs, development or the potholes on your street.

“How can San Antonio position itself to be in the 21st century what the Silicon Valley and Austin were to the technology revolution of the 20th century?” the mayor said, asking the public to “lend us your ears, your opinions, your experiences to shape our city’s future.”

The response has been overwhelming, and attendees are urged to arrive at 8 a.m. for registration. The Saturday event runs from 9 a.m. to 1 p.m., with a noon lunch break, at Tri-Point, located at 3233 N. St. Mary’s St.

Space is also made available at nearby SAWS headquarters for an expected overflow of people and the City of San Antonio will provide shuttle service.

In addition to joining the NOWCastSA livecast, participants are encouraged to make their ideas known via Twitter, Facebook and other social media.

The city’s official Facebook page has already been deluged with comments, ideas and opinions. They range for the need for more parks, light rail, more funding for the arts, improving sidewalks, doing something about stray dogs, preserving the water quality of the aquifer and conservation of our green spaces.

“A light rail system would have the most long term positive impact on the future of San Antonio,” one person wrote on Facebook’s official SA2020 page. “Start out small with a line from the airport into downtown that allows faster and cheaper access for those visiting for business or pleasure.”

There hasn’t been a similar endeavor since 1983 when then-Mayor Henry Cisneros launched Target 90 that developed projects such the Alamodome and brought biosciences companies to San Antonio.

But it’s a different world now. Since then, San Antonio’s population has skyrocketed, from about 800,000 to nearly 1.4 million and the economy has evolved from one based just on the military and tourism to also include technology and manufacturing.

This forum is the first of several meetings in which residents will be able to share their views on what they would like the city of San Antonio to become in ten years.

Photo on homepage courtesy of Brandon Watts on Flickr. 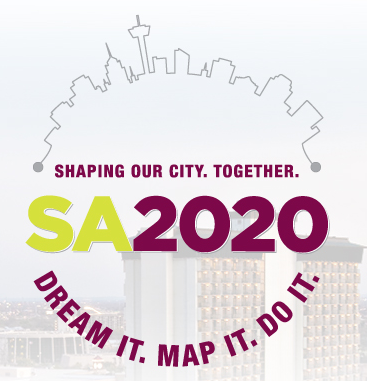