“San Antonio is in the middle of a renaissance.”

Transformation of San Antonio has long been a theme of the nonprofit Choose San Antonio and its partners. They are helping to turn the notion of San Antonio as a mere tourist town. The message has been no different at the South by Southwest conference in Austin, where several San Antonians are discussing how local organizations and businesses are driving redevelopment of the Alamo City in different ways.

Peter French, partner in the local firm Rising Barn, spoke during the first day of SXSW, March 10, as part of the Casa San Antonio activation at the Half Step Bar. Rising Barn strives to offer more housing options by providing do-it-yourself and micro single-family units.

An overall change in perception of their city has San Antonians encouraging commercial and residential redevelopment citywide. More incentives offered by the city and Bexar County also are boosting efforts to provide more housing, as San Antonio’s population increases, along with commercial opportunities .

“The message (to developers) is you’ll be welcomed. The city and county will help you,” said French.

View a photo gallery of the events below. 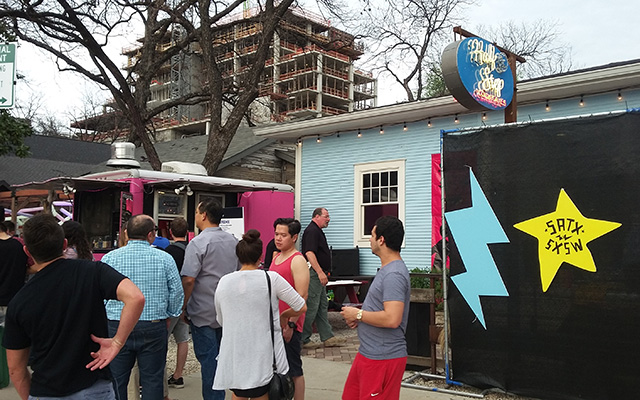 Infill development happening in neighborhoods such as Southtown, Dignowity Hill and around Pearl are examples of areas where mixed-use development continues to invite more people and businesses to relocate and experience work/live/play opportunities. The success of Pearl, specifically, proved that mixed-use redevelopment - on a large scale - could work in San Antonio’s urban core.

“We needed that first success,” French said. “We want more of that, too but what we do have now is pretty powerful.”

But French spoke of the importance of public investment - basic infrastructure, parks, libraries and the like. He said, for example, development around the Toyota Tundra assembly plant and Texas A&M University-San Antonio has been relatively slow because there had been a lack of foresight in providing supporting infrastructure in the area.

French also said it’s critical to preserve what San Antonio has in the way of neighborhoods, landmarks, historic buildings and other elements that contribute to the city’s diverse heritage and traditions. In this regard, San Antonio has done better than other growing cities in preserving the sense of genuine community.

“We have a historic tapestry that has been wiped clear in other cities,” French said. “What we have is authentic and exciting. It tells people this place has a legacy. It has its roots.”

Daschbach talked about how philanthropist Christopher “Kit” Goldsbury backed the retrofitting of the former Pearl Brewery — incorporating old into the new. He called Goldsbury a visionary who has been hands on and calculating when it comes to redeveloping the late 19th century brewery complex.

“You really have to curate the vision. You don’t leave the little things left to chance,” Daschbach said.

The positioning of Pearl as a place of culinary experimentation has also made it a spot where Hispanic culinary talents can grow their skills and even lead and position their own ventures in a more visible way. Such is the case with chef Johnny Hernandez and La Gloria. Daschbach said Hernandez, by opening La Gloria at Pearl, helped to jumpstart the mixed-use complex to the next level.

San Antonio has also become a place of entrepreneurship, with the rise of business incubators and accelerators such as Techstars. Techstars’ San Antonio mentorship program had been most recently based at Geekdom before the local office closure in 2016.

David Henry, founder of Card Isle, participated in the Techstars accelerator, listening to mentors in order to grow his venture. His company has a presence in a handful of states, offering kiosks where people can create their own automated, professionally designed greeting card on site.

The idea is twofold: To reduce the hassle of finding the right card in a store aisle, and to effectively communicate the right personalized message to a loved one, friend or even - for a company - to colleagues or subordinates. Artists can use the platform to make money on their own designs that are used on the greeting cards. Henry said organizations such as Techstars are filled with mentors and aspiring entrepreneurs who know they have a great idea, but also realize the creative forces behind the idea are more important.

Lorenzo Gomez, executive director of Geekdom, in his separate presentation, echoed those sentiments about that organization’s growth and ability to foster local startups.

“The Techstars community is much like the San Antonio community,” Henry said, adding that individual participants are empowered to overcome their challenges.

Bria Woods and Laura Calo talked about how their experiences with inadequate personal safety led to a chance to pitch the creation of an app that can help raise that level of safety. Woods and Calo were inspired to continue onward with the development of the GLO (Good Looking Out) app, which especially is designed to improve a college student’s level of safety. It notifies one person’s friends and family when he or she has made it home after school, work or a party.

Woods and Calo thanked several local organizations, educational institutions and businesses, such as the San Antonio Entrepreneur Center, Trinity University, Geekdom and Sukeban restaurant, for helping in their endeavor. Woods called San Antonio a city on the rise.

“It’s a nourishing environment,” she said. “It has a fantastic startup community.”

“We chose San Antonio to continue on with (our work),” Calo added.

The GLO app is in pre-launch phase, and community members are invited to help test and play with the beta version. While Choose San Antonio participants such as Henry and Woods used the power of local startup accelerators and incubators to their advantage. But other local entrepreneurs came to the town the old-fashioned way — on a whim with a chance to create something new.

Cured chef/founder Steve McHugh talked about his journey from a rising chef in Louisiana to opening a San Antonio restaurant - Luke - for renowned chef John Besh. Two months before his move, he became ill and was diagnosed with lymphoma. Even though it was a post-hurricane Katrina scene in New Orleans, McHugh’s options for the right cancer treatments in Louisiana were still limited.

“San Antonio was a saving grace. I had options there,” he said, referring to the wealth of healthcare providers.

McHugh said it has never been his intent to show up fellow San Antonio chefs and restaurant owners, especially those native to San Antonio. Instead, he has come to appreciate all that comes with a mature city such as San Antonio, which he said is similar to New Orleans in its architecture, history and culture.

When his cancer went into remission, McHugh got into “the vibe of San Antonio and I felt one with the city.” “People say ‘I chose San Antonio,’ but San Antonio chose me,” McHugh added. “It’s a city of opportunity. There’s room for growth.”

Molly Cox, president and CEO of SA2020, talked about how her nonprofit measures community growth using several indicators. A goal for SA2020 is encourage collaboration and communication among agencies, businesses, educational institutions and nonprofits that all have a vested interest in moving the community in a positive direction.

“Our job is to overarch 50,000 feet above everything and say, hey, that’s not moving’,” Cox said. “Let’s figure out the ultimate outcome, the largest community indicator and move backwards.”

Cox called comprehensive education, particularly college attainment, as perhaps the largest key toward enhancing the quality of life for many San Antonians. The furthering of local efforts in specific educational fields, such as the arts or STEM (Science Technology Engineering and Mathematics) can go a long way here.

Along the lines of enhancing civic engagement, U.S. Rep. Joaquin Castro (D-San Antonio) was part of a panel discussion about how technology can advance voting trends. The discussion was not a Choose San Antonio event, but the local Congressman addressed how Texas state policies remain a challenge to voting and registration. Castro said there are two problems; people who are eligible but are not registered, and those who are registered yet not voting.

“We need to collapse that process” in making voting registration automatic,” he added.

A fellow panelist, Republican U.S. Rep. Randy Hultgren from Illinois-based said he’s leery of any effort toward automatic voter registration or making voting mandatory, as some people have suggested.

Castro also expressed concern about the lack of voter education. Despite the wealth of news and information outlets, much of the population still is ill-informed or totally uninformed about certain candidates and issues, he added.

Castro blamed, generally, how some campaigns fail to target certain communities that already feel left behind or disenfranchised.

“There’s a large swath of people who don’t know anything about their candidates, so they step back,” he said. “That’s a very pernicious problem.”

Castro said there is a need for a more secure system to make it easier to do voter registration.

“You ultimately have a choice on whether you’ll exercise that right to vote,” he added.

View a small photo gallery of the events below. 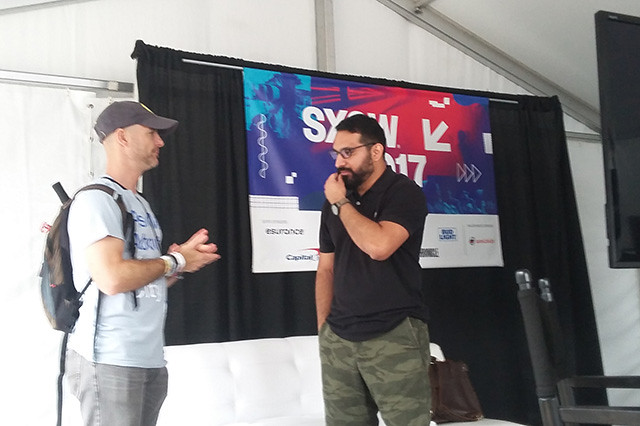 TASTES AND SOUNDS OF SAN ANTONIO

Choose San Antonio enticed crowds in the mornings and evenings of the first two days of its Casa San Antonio activation.

The Box Street Social food truck provided breakfast tacos one morning, followed the next morning by Steve McHugh and his Cured team cooking up fried quail and mini-doughnuts. Those delicacies were accompanied by jalapeño-infused syrup for dipping.

Visitors to Half Step/Casa San Antonio have also been entertained by local musicians, thanks to a showcase curated by San Antonio Sound Garden. The bands White Elefant, The Lost Project, Carlton Zeus and Dolphin Dilemma performed the first night of SXSW. 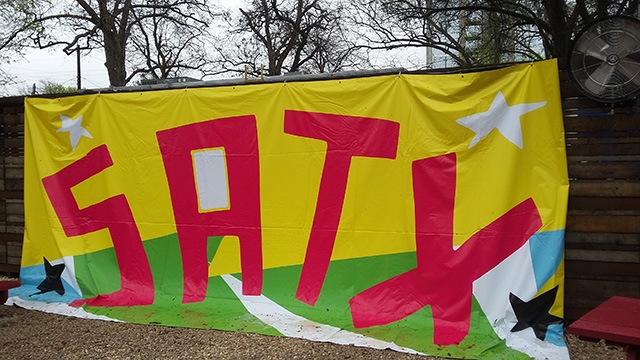