Several San Antonians, past and present, helped lift the conversation at the  2018 South by Southwest festival, promoting cultural and professional diversity and exploring ways to effectively measure a city’s growth.

Dr. Chiquita Collins, vice dean for inclusion and diversity at UT Health San Antonio, took part in a panel discussion about unconscious biases that are driven mainly by stereotypes, and how they adversely impact all sorts of things, including hiring practices and healthcare outcomes.

Collins was joined by Dr. René Salazar, assistant dean for diversity at the University of Texas at Austin Dell School of Medicine.  Salazar earned his medical doctorate at UT Health San Antonio.

“Let’s think about what in the world introduced this,” Salazar said. “There are a lot of messages we receive on a daily basis. Be mindful of how these experiences and exposures continue to reinforce these stereotypes and unconscious biases.”

Salazar and the other panelists people to take the Implicit Association Test here, which enables people to determine their implicit associations about race, gender, sexual orientation and religion.  “Until we get to a point where we can become a color-blind society, and we’re not there yet, we still have to deal with this critical issue,” Collins explained.

Collins said while it cannot happen overnight, one way to mitigate negative stereotypes is to replace those negative images with more positive ones.

She cited as an example the historic box office and critical success of the comic book superhero film “Black Panther,” which envisions a technologically advanced, sophisticated African nation with a strong leader.
The movie is already among the highest-grossing U.S. films directed by an African-American, and dominated by a majority black cast.

“Scientists are saying we have to counteract and engage role models or characters that can substitute some of the negative imagery that we see,” Collins added.

SXSW organized a Cities Summit, a day’s worth of panels and presentations about an array of issues, such as human services, infrastructure and gentrification, that facing leaders of growing urban areas. Numerous civic officials, urbanists and community organizers from around the country and abroad took part.

One panel used San Antonio as an example - an evolving major city that knows its work is cut out for it in terms of challenges such as socioeconomic segregation, public health and education.

Molly Cox, president and CEO of SA2020, talked about the annual impact report that the nonprofit produces. It tracks San Antonio’s growth and progress by several specific indicators.

The SA2020 campaign also helps to guide human services in the local private and public sectors on how best they can work together more effectively, and help to further develop a shared vision for the community.
The 2017 SA2020 report, released in January, shows that 70 percent of community indicators are headed in a positive direction, but Cox has said a bigger picture must be considered.

“If your community is values-driven and results-driven, everything that follows should move toward equitable outcomes,” Cox said at SXSW.

“We’ve created an online platform where you can basically choose a cause area, engage in 20 different ideas and get engaged,” Cox added.

Equality Texas representatives said the importance of this multimedia campaign has been greatly emphasized since the Texas Legislature’s attempt in 2017 to regulate public bathroom use and prevent transgender Texans from using bathrooms that traditionally align with gender identity.

Rachel Gonzales, the nonprofit’s education and resources coordinator, is mother to three children, including a 7-year-old trans daughter. She and her family spent much time at the state capitol last year, advocating for rights of transgender people.

She said Equality Texas is helping to form networks of support and services for families with transgender children and teenagers.

“(This is for) when you have a parent who’s been shell-shocked that their kid has come out and they’ve never had to go in to have a meeting with the principal,” she added.

Laura Dixon, head of external relations for Spurs Sports and Entertainment, was part of a panel whose members shared experiences from the Global Sports Mentoring Program (GSMP).

The program, created by the U.S. Department of State, espnW, and University of Tennessee, works to empower women and girls through professional female executives in sports sectors serving as mentors.

The panelists said program recipients - especially disabled individuals or those from developing countries - see their worth, build skills and take those talents back home to realize their own potential and grow their communities.

But mentors themselves learn a few things along the way. The program also charts those participants’ progress long after they have received training and tips from mentors.

“They are leaders in their own right. They are building up their communities,” Dixon said. “They have so much to share with us.”

This is a rarity for many participants who are otherwise harassed or targeted for exclusion in their usual settings back home.

“It’s not just about coming to the United States and learning about culture in the U.S., it’s about having other kinds of cultural experiences,” she added.

Diversity in the workplace

The panelists shared how they are trying to break cultural stereotypes through their content and in their own newsrooms.

Recent years have held sobering news about how media outlets, despite pledges to hire more women and people of color, have not done well in that regard.

Still, individually, women reporters and editors and journalists of color are trying to increase the number of stories that reflect a wider segment of the population, including articles about entrepreneurs of color, and female founders of companies and organizations.

“There’s definitely sometimes within stories where we recognize there’s something in there, an opinion in there, that’s maybe consciously or unconsciously being written by certain authors,” Floyd said.

The panelists agreed unconscious biases exist in newsrooms, but that is why more diverse staffs can help to provide newer or different approaches and mindsets on stories concerning a segment of the population.

“For some reason, there’s still a feeling that the predominant mainstream way of thinking is OK and not to be questioned because it’s valued more than the opinions of political minority, and that has to change,” said Vanessa De Luca, editor-in-chief of Essence. 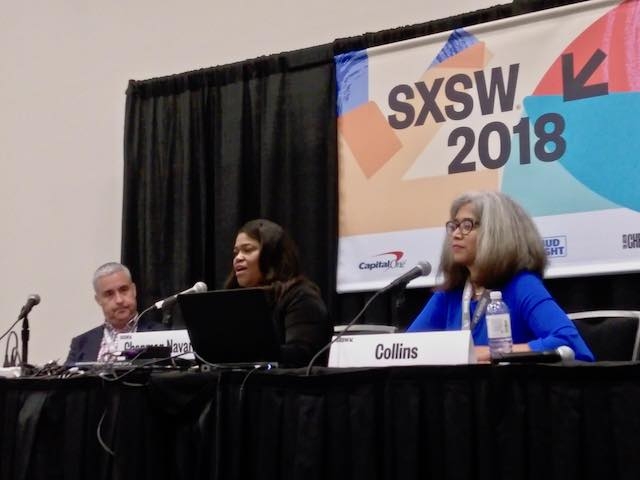