Political and technology leaders from San Antonio were out in force for the duration of the interactive portion of South by Southwest in Austin.

Choose San Antonio wrapped up its Casa San Antonio activation at the Half Step bar on March 12. But before the closure, the nonprofit group hosted a day’s worth of presentations revolving around Smart City initiatives.

The day began with a breakfast roundtable focused on cybersecurity. One of the participants was Omar Quimbaya of Def-Logix and The CyberDEF Dojo.

Quimbaya said data continues to back up the fact that San Antonio has the most cybersecurity assets of any U.S. city outside of Washington, D.C. Thanks to the increasing number of startup incubators, accelerators and coworking spaces, as well as established military/federal agencies, San Antonio’s tech star is on the rise, he added. As a result, more tech industry workers are finding San Antonio a city to enjoy life and grow a career, Quimbaya said.

“We want San Antonio to be a walkable, liveable city,” he added.

“If you want a city on the rise, San Antonio is the place to be,” said Chris Gerritz, co-founder of InfoCyte.

Gerritz explained the number of talented workers in tech and other local rising industries is expanding.

“(Venture capitalists) are comfortable paying for what they have now,” she added.

Another roundtable participant was Tiffany Tremont, president and CEO of the Silotech Group. It’s a certified economically disadvantaged woman-owned small business that focuses on tech consulting and staffing.

Tremont called San Antonio a vibrant area that’s a source of skilled labor. Having served in the military, Tremont sees San Antonio at the forefront of the cybersecurity industry.

“I’m looking for cyber-protective operators. They know their value,” she said. The thing that keeps them here is the quality of life.”

Tremont said San Antonians have access to the same things that larger cities have access to, especially quality educational institutions, relatively affordable costs of living and a diverse culture.

“You can have your skill and be paid your worth. Why wouldn’t you work here?” she added.

Mayor Ivy Taylor was among leaders from a handful of U.S. cities to speak about how their communities are becoming Smart Cities — places where technology is used to improve local government and the quality of life. Taylor mentioned the sustainable initiatives San Antonio has taken on, namely the San Antonio Water System diversifying the city’s water supply.

She said the analysis and sharing of vital, timely data across local government platforms, and with residents and businesses, furthers digital connectivity.

“It’s ensuring that everyone has access to the apps, dashboards and interactive opportunities offered by a smart city,” she added.

Even with San Antonio’s growth, it is no different that most other cities grappling with issues such as affordable, long-term, stable homeownership. In a non-Choose San Antonio panel, former Mayor Julian Castro helped to address that specific issue, having been informed from his time as U.S. Secretary of Housing and Urban Development (HUD).

Castro laid out a variety of challenges for aspiring homebuyers and current owners:

On top of these and other issues, there is worry about the billions of dollars that the Trump administration is proposing for HUD. The former HUD secretary said many things are needed to help address these issues.

“We need more affordable homes. It’s getting more experience to live in a cities like Austin, even in San Antonio,” he said.

Castro made a number of suggestions: reducing the burdens for older homeowners, including Medicare costs: addressing student debt to help younger homebuyers; and tax reform that can affect lower-income taxpayers.

“We have to focus on the link between health care costs and housing, where you improve the quality of life (for homeowners) and drive down costs for taxpayers in the long run,” he added.

View a small photo gallery from SXSW 2017 below. 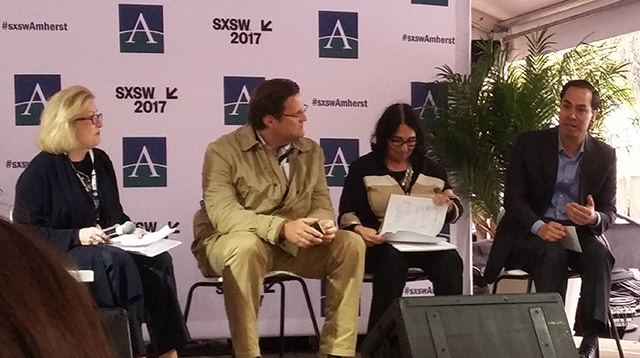 ​Back at the Austin Convention Center, Choose San Antonio set up shop at the SXSW trade show with its icehouse-themed space.

Visitors got to play a game of Cornhole, picked up freebies, designed a free greeting card from a Card Isle kiosk, and talked with “ambassadors” who were promoting San Antonio’s diversifying economy and culture.

One film was Fidel Ruiz-Healy’s “A Band of Thieves,” about a Western-obsessed girl who upends the quiet of her small town by going on a crime spree of sorts. Another was Will Shipley’s “Mentiroso,” about a young boy who spreads the word that he can secure a compromising photo of the town’s most beautiful woman. Another was Daniel Maldonado’s short, “Birth of a Killer.”  It stars (and is co-produced by) Ricardo Chavira of “Desperate Housewives” fame and co-stars Sebastien De La Cruz, who has parlayed his fame as a young mariachi singer into a budding acting career.

San Antonio native Jesse Borrego, who also appears in “Birth of a Killer,” was on hand for the festivities.
A longtime advocate for San Antonio’s film industry, Borrego said films such as Maldonado’s work allow locals to tell their stories in a more authentic, independent way.

“These films are, as (Borrego) said, puro San Antonio,” said local filmmaker and educator Sam Lerma. “All the films are very San Antonio and are encompassing of San Antonio.”

Borrego and other special guests at Casa San Antonio spoke of the importance of boosting the city’s and the state’s incentives to nourish local cinematic talents and to attract larger productions seeking a friendlier and more affordable filmmaking climate. Existing friendships and professional relationships are also key in bolstering San Antonio’s entertainment industry.

While he’s grateful for having performed in renowned shows and movies such as “24” and “Blood In, Blood Out,” Borrego said he likes the smaller scale cinematic projects.

“For me it’s a chance to collaborate and to do things that aren’t typical of what Hollywood offers me a lot of times,” he added.

“I have a hard time fighting the stereotypes offered to Latino-American actors. So in that sense, working with someone like (Maldonado) gives me a chance to say these are the parts I want to play, these are the things I want to do.”

​In a non-Choose San Antonio presentation, local blogger Melanie Mendez-Gonzales of Que Means What led a panel discussion about fostering cultural diversity when it comes to enjoying and appreciating the outdoors, recreational spaces and heritage sites.

In 2014, Mendez-Gonzales had been invited by the American Latino Expedition on a trip to Grand Teton National Park. She explained that, before the trip, she had not considered herself an outdoorsy person. Most trips with her family had consisted of large touristy cities and destinations such as Disneyland.

“It literally changed my life,” she said. She showed pictures of her visit, which included a chance meeting with one park employee who casually mentioned he had never seen so many Latinos in the park at once until that moment.

That trip helped to spur a question that began the panel discussion: What does inclusion mean to people? To Mendez-Gonzales, it meant both truly enjoying nature and encouraging other Hispanics to do the same. Appreciation of nature, in this manner, also promotes exercise and a refocus on one’s physical health, she added.

Mendez-Gonzales and others on the Grand Teton trip learned how organizations such as the National Park Foundation seek to preserve such large public green spaces, parks and heritage sites. Mendez-Gonzales was inspired to follow up with other trips. She took her family to Big Bend National Park in 2015, and to the Rocky Mountains in 2016. They’ve all since learned much about the outdoors.

“If I can make changes in my family, hopefully others can see it in themselves to do the same,” she added.

“It’s amazing to see and discover what’s out there in the outdoors,” she added.

The National Park Service is running hashtag campaigns, #FindYourPark and #EncurentraTuParque to inspire people to find their nearest public park and share their experiences online. Sobel said these campaigns are not just concentrating on communities of color. She said the public should know that parks do welcome the disabled and veterans, among other communities.

**Cover Image: A scene from the film showcase at SXSW 2017. Photo by Edmond Ortiz. 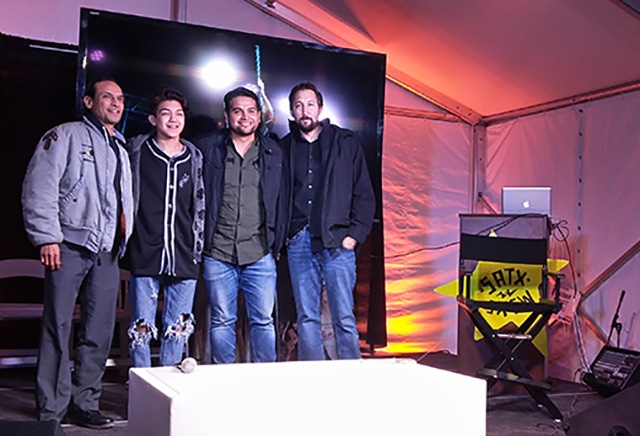