Symposium explores the definition of 'puro'

Updated: What is "puro" in San Antonio? In a Feb. 21 event at Brick at Blue Star Arts Complex, 11 San Antonians offered their thoughts on what makes something or someone purely San Antonio.

The consensus? It depends on one's viewpoint, the speakers and audience members said. The definition could range from music or color to food or sense of place. Or all of the above.

The symposium, "Puro - On the Edge of Future" was spearheaded by Antonio Petrov, an assistant architecture, construction and planning professor at the University of Texas at San Antonio. Petrov and his students helped facilitate recent public discussions on envisioning the future of the Broadway corridor.

With several UTSA graduate students watching, Petrov and the speakers provided their thoughts on how the term "puro" reflects layers of San Antonio's history, culture, economy, philosophies and how it even influences other things such as the physical environment, especially with the city's growth.

"How do we embrace the things that are known to us?" Petrov asked. "What does it mean? What does it taste like? Where can you and can't you find it?" 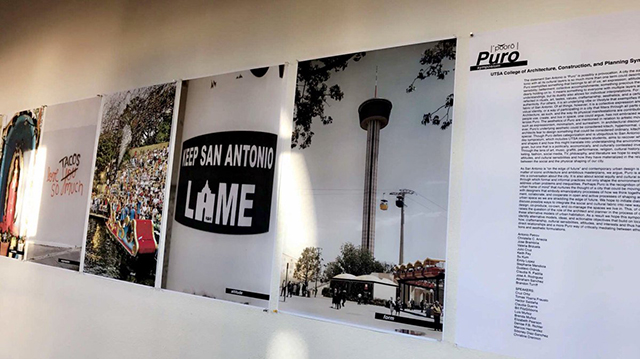 Each speaker showed photos for his/her brief presentation.  Speaker Claudia Guerra spoke of "puro" as a sense of place. As she often researches the connection between what she calls "the spirit of place" and the "spirit of people," Guerra spoke of growing up on the city's West Side.

As she showed pictures of West Side homes and iconic businesses and institutions, Guerra said "puro" - to her - is authenticity in the place. But so are personalities - the residents who show pride in their community and celebrate it however they can. It can even be the eclectic, such as how someone outfits their home. Guerra showed one picture of a West Side home whose front yard contains a bathtub on the ground.

"Stories are important to a neighborhood," she said.

Siboney Diaz-Sanchez, architectural designer with Overland Partners, said "puro" in San Antonio can be the biggest and smallest things. It could be a random discovery, as one picture showed, such as a Tupperware full of pico de gallo sitting outside the Hermann Sons lodge on South St. Mary's Street. Or it could be a pizza parlor decorating its pies with pepperoni slices put together to spell the "u" in "Spurs."

Diaz-Sanchez explained it could also be, simply, about people's lives. She showed pictures of the hands of construction workers working on houses she has helped to design. This demonstrates placing a value on your sense of community.

"I think it's important to acknowledge the people who have a hand in what you're trying to produce," she said.

Denise Richter, journalism/communications professor at Palo Alto College, said she appreciates the walkability that has increased across the city. Richter recalled her time as a college student in Madrid, Spain, reveling in walking around the city and in other places in Europe. But her work at a River Walk restaurant afforded her the chance to appreciate more than the touristy side of town.

Where ever one can walk, a person can learn about - and embrace - that place, its history, heritage and everything else it can offer. She showed pictures of the Mission Reach of the San Antonio River, Monte Vista, Woodlawn Lake Park, and the downtown part of the River Walk. She praised the city's decision to close Main Avenue at Commerce Street and expand Main Plaza, a move she said made for a more welcoming place for locals and visitors.

"We're a friendly place because we allow ourselves to walk and get to know one another," she said.

Artist Bill FitzGibbons called San Antonio colorful, adding that color is dominant in many facets of life around town. From Fiesta and the downtown holiday lights to the Central Library and the old-school Spurs logo, San Antonians revel in the use of colors to reflect the city's heritage and people's approach to life.

FitzGibbons showed photos of his illuminated installations around town, such as University Health Clinic and the Bank of America plaza building downtown. They are all influenced by the color he sees used in San Antonio.

"These pieces come from a sense of celebrating color, and that San Antonio is a really great community," he added.

Christine Drennon, associate professor of sociology at Trinity University, approaches "puro" with a different viewpoint. As a former New Yorker, she gives her first-year students a unique assignment each semester. She tells the students to ride the bus to the edge of town and back, taking photos along their route.

Drennon said certain things stood out to her, over and over, each semester. Unique homes, businesses and other lesser known landmarks were prominently featured in the photos. One picture was of a house painted yellow.

"People who've taken their homes, painted them over, made it their own," Drennon said. She added a more sobering reflection, a concern that as the city grows by an estimated 1 million newcomers by 2040, there may be less appreciation for the people, places and things that make San Antonio unique.

She showed a picture of a business with a tall, gaudy Elvis Presley figure standing atop it. "I don't know if Elvis atop a chop shop on Nogalitos Steeet will fit into this new vision." she added, prompting some laughter.

Artist Cruz Ortiz applied his own artistic vision of authenticity. He said he enjoys painting on site — seeing the person or object or place of focus on site. That way, it’s his vision of what’s happening rather than someone else’s vision in some other reproductive work, such as a photo.

"I love to see people there in the moment,” he added.

Graphic designer Marcos Hernandez, of FPO Marketing and Advertising, talked of how San Antonians have perceived themselves through branding over recent decades.

Hernandez noted that while locals are proud of their city, such pride really was not visible to the wider public until recently.

Hernandez said that may be because many San Antonians looked to other cities in the past for inspiration on how best to express themselves. He noted how the “Keep San Antonio Lame” mantra, created over a decade ago, was a partial response to Austin’s “Keep Austin Weird” campaign. Now, with the city’s growth, San Antonians can feel more comfortable expressing their heritage and history. Locals have turned from “aspirational to inspirational,” Hernandez said.

"We should take more pride in ourselves,” he added.

Brenda Muñoz, who currently works for KSAT-TV, recalled how her playful Twitter brand, @purosanantonio, came to be. While the term “puro San Antonio” has been around awhile, late in the last decade, Muñoz casually tossed the term into social media posts that she or other local Twitter users found as a descriptor of things truly San Antonian. Such things could range from photos of a meal consisting of Big Red and barbacoa memes.

One such meme was a San Antonio Express-News photo of a local man tubing on a flooded street, with beer in hand, during the May 2013 torrential rain and flood event. All in all, the twitter @purosanantonio has come to humorously embrace a wider gamut of San Antonian “traditions,” including Spurs fandom, Fiesta and more eclectic scenes on the West and South sides of town.

But not all of the memes are completely for laughs. One that has been tagged @purosanantonio is a double-picture meme symbolizing the start of Fiesta.

One picture of Fiesta royalty state that Fiesta starts here. It's followed by a photo of the Bexar County Jail, where motorists caught driving while intoxicated during Fiesta end up. "You have to take the good with the bad," she said.

Local producer/director Luis Muñoz talked about the evolution of San Antonio's take on the famed South Austin wall slogan, "I love you so much." We know that as "I love tacos so much." Sometimes, that message is known as "I love Spurs so much." When they spot the local slogan, many San Antonians stop to take a photo with it and post it on social media.

Muñoz said it was meant somewhat as a playful jab at Austin, but also to reflect San Antonio's blue-collar attitude.

"We're like the Pittsburgh (Pennsylvania) of Texas," he said. "What's puro to us is our attitude."

Although she's an Austin native, culinary writer Elizabeth Pearson said she finds herself more at home in San Antonio than in Austin. She married into a Hispanic family, and that has given her the opportunity to explore not only her husband's heritage, but other cultural traditions around town, especially when it comes to food.

Pearson counted raspas and bean and cheese among the foods she and her family relish. But she also appreciates those who make the food that San Antonians love so much. It's been noted through generations, she explained, that locals truly think a food is "puro" if someone's loved one made it from handed-down recipes.

Adelita Tamales and Tortilla Factory offered complimentary chips, salsa and tamales at the symposium. Pearson acknowledged their presence and praised what their workers do for the community -- making traditional foods fresh, on site, with love and pride.

"They make food to fill my children's bellies when I can't on a busy morning," she added.

"That West Side sound came from the East Side," Saldana said, noting the blending of genres over the years. He added that many local musical venues - past and present - have helped to make these and other musicians truly San Antonio's own.

David Martin Davies of Texas Public Radio rounded out the symposium, showing photos of older Fiesta posters that hang around his workplace. The colors and celebratory spirit has always reflected San Antonians' attitude toward life, he said.

Davies showed other photos he thought the attendees would find interesting. One was of a 1938 Life magazine cover of dancers from the Jefferson High School Lassos squad. While the young women in the photos smiled, he noted they both were Anglo attending a then-segregated high school.

"A lot of the students walking the halls of Jefferson today probably don't know they couldn't go there back then," he said. Davies also showed a picture of a clipping from the late local columnist Paul Thompson. Thompson was renowned for his conservative, bombastic style. In this particular column, Thompson attacked Davies' mother, by name, as he denounced local liberals. Davies showed a bit of emotion.

"We wouldn't be here without that struggle," he added.

Petrov said the symposium was not a means to an end, but a conversation starter. He invited the attendees and the public to add their thoughts to the "Puro" Facebook page. 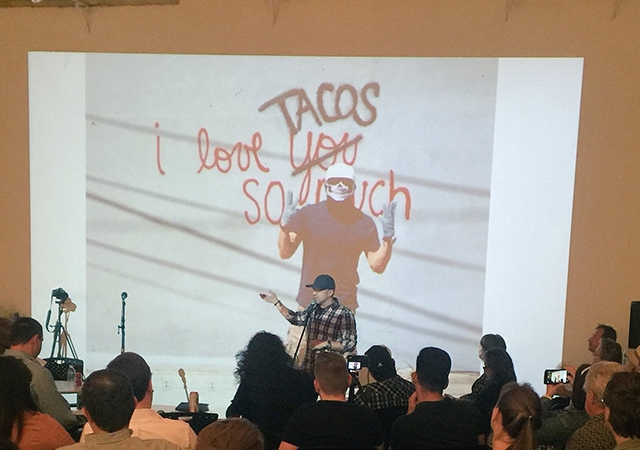