Enforcing San Antonio’s new anti-idling ordinance could contribute to a 20 to 25 percent cut in ozone and mean easier breathing for everyone.

The San Antonio City Council approved both a vehicle idling ordinance and a ban on coal-tar sealants in pavement products during its June 30, 2016 session, setting a citywide standard to improve air quality.

“It’s a matter of public – but also economic – health,” said District 8 Councilman Ron Nirenberg, a strong air quality proponent who proposed the measures. “Once our city fails to meet federal air quality standards, not only will the health of our residents suffer, but we will face costly penalties that make it harder to do business here.

“This ordinance is a small but important first step to overcome those challenges,” he said during an interview after the Council session. (Watch video of the City Council discussion of this issue here. See slideshow below.)

The anti-idling ordinance, which goes into effect Jan. 1, 2017, will levy a $500 fine per day on heavy vehicles (vehicles that have a gross weight of 14,000 pounds or more) that idle for more than five minutes. The ordinance puts a 1,000-foot perimeter around sensitive areas: near schools, hospitals and neighborhoods. Learn more about vehicles targeted by the ordinance and exemptions here.

Cutting idling by big vehicles could help bring the city’s ground-level ozone measurements back into attainment with federal air quality standards and mean easier breathing for everyone – particularly allergy and bronchitis sufferers.

Russell Seal, a pharmacist and member of the Sierra Club, said San Antonio’s ozone levels could be cut from a current 180 tons per day to 140 tons per day by 2018 but that it can’t be done without an ordinance, as well as funding to bring public awareness to the serious health aspects.

San Antonio is likely to be found out of compliance with the Environmental Protection Agency’s new National Ambient Air Quality Standard when the organization designates nonattainment areas in October of 2017. The American Lung Association recently gave Bexar County an “F” for Ozone as this article explains.

San Antonio joins Bexar County and 44 other Texas cities with anti-idling ordinances, including Austin, Dallas, Houston, and the City of Leon Valley.

“This item is a milestone for San Antonio’s air quality and for protecting the air our children breathe,” said Krystal Henagan, Texas field organizer for Mom’s Clean Air Force, whose 7-year-old son suffers from asthma that she said was exacerbated when they moved to San Antonio.

She called on the City Council to increase its budget for the air quality program to ensure effective education, implementation and enforcement programs and to carry out the ordinance.

The ban on coal tar comes on the heels of similar regulations passed in neighboring cities. In 2005, Austin passed an ordinance prohibiting the use and sale of Coal Tar Sealants.

Nirenberg, who first proposed the coal-tar ban in 2014, called it a historic moment for San Antonio and an “important day for the health of our families.”

“Our city is now the largest in the nation to ban coal tar, a product that we know has chemicals known to be carcinogenic,” he said.

“This is a common-sense solution backed by science that will ensure that our families are safe, our environment is protected and our drinking water stays clean for generations to come,” Nirenberg said.

Proponents of air quality held a news conference on Main Plaza before the Council convened to vote.

Henagan, who spoke at the conference before the meeting, said the ordinances are important in preventing diesel exhaust fumes from entering playgrounds and other areas where children are susceptible to air pollution and might be suffering from asthma and bronchitis.

Air quality supporters agreed the two ordinances are a measure in the right direction but that much more must be done to protect air quality in San Antonio.

The Texas Commission on Environmental Quality will use the annual fourth-highest daily maximum eight-hour ozone concentration, averaged over the past three years, from monitor air readings at sites including Camp Bullis, San Antonio Northwest and Calaveras Lake to give a recommendation of nonattainment to the EPA.

Since the three-year average is already established, city officials are studying measures that can improve the air or alleviate the immediate regulatory consequences.

Nirenberg said the City would use code enforcement to press the anti-idling ordinance once it goes into effect.

“We need it to be an enforceable regulation, but we also want to create mechanisms for enforcement that wouldn’t require a police officer to watch an idling vehicle for five minutes,” he said.

Now that the ordinance has passed, the City will launch a two-pronged campaign to create public awareness about why air quality standards exist to protect public health and to underscore the effects of poor air quality.

For more information about various solutions by the public, businesses and government, see the Alamo Ozone Advance report by the Alamo Area Council of Governments.

San Antonio leaders are also working on a study examining the economic costs of nonattainment, similar to one conducted by the Capital Area Council of Governments (CAPCOG) entitled “The Potential Costs of an Ozone Nonattainment Designation to Central Texas.”

According to that study, a nonattainment designation could cost the Central Texas economy $24 billion to $41 billion between now and 2046.

“Because of the effort to protect public health, there are strict regulatory penalties for the city’s designated nonattainment, so we are trying to make people aware that every effort needs to be made to reduce the time and level of nonattainment that San Antonio is in,” Nirenberg said.

The city is working with meteorologists and local news organizations to highlight ozone alert days, and studying incentives for employee commuter programs and more flexible work schedules as part of the regulatory and policy process. 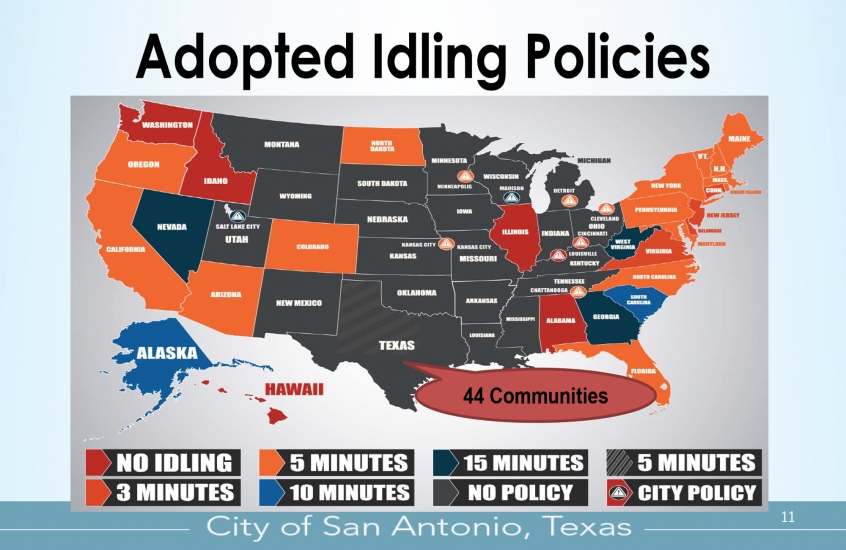