Tearing down monuments is one of the oldest American traditions

Tearing down monuments is an old American tradition – one of the oldest.

Listen to the story with a video slideshow:

The Declaration of Independence was signed in Philadelphia on July 4, 1776. Five days later, they held the first public reading in New York City, where George Washington was camped with his soldiers in Bowling Green Park.

You know the park: it's in lower Manhattan, in the financial district. At its northernmost tip is that famous statue of the charging Wall Street Bull. On July 9, 1776 there was a different statue there: a statue of King George III on horseback.

In the Declaration of Independence, Jefferson included a litany of 27 grievances against the King.. He ended this list with an intractable statement: “A Prince whose character is thus marked by every act which may define a Tyrant, is unfit to be the ruler of a free people.”

So, the people of New York and the soldiers stationed there tore down that statue of that tyrant, that unfit ruler that no longer reflected the hopes and values of these new American people.

The lead from the two-ton statue was shipped to a foundry in Connecticut and made into precisely 42,088 musket balls. The bullets from the torn down statue were then used by the Continental Army to fight the British. Karma, on a monumental scale.

Everything but the head. According to a report written by a British officer, the Americans defaced the gilded lead head – tore off it's nose, put musket ball through its skull – and planned on displaying it on a pole outside Moore's Tavern, mimicking the way the English King displayed the heads of traitors for all to see on London Bridge. In a slick midnight raid, the British stole the head and shipped it back to England, where the king without a nose was trotted out to illustrate the treasonous disloyalty of the Colonists.

The statue's granite base remained in place as a ghostly reminder – a sort of symbol of the absence of a monarch – until 1814, when the United States finally made peace with the British. 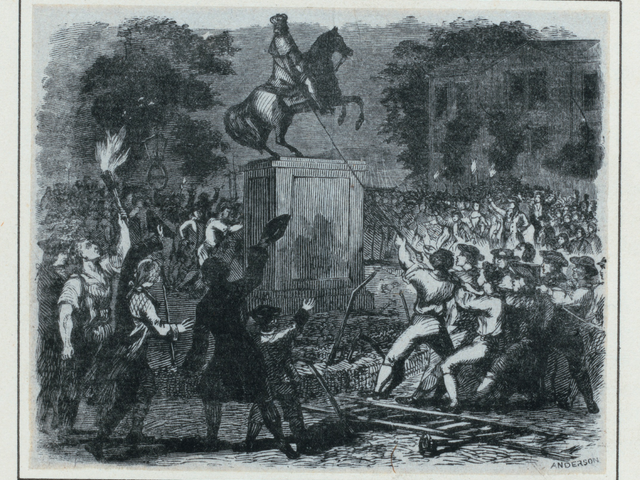