Texans who could serve in Trump's Washington

No sooner had Donald Trump shocked the political world by winning the presidency than Texas Republicans turned to a new discussion: How much influence will the Lone Star State have in the next White House?

Throughout his campaign, Trump cultivated a number of loyal allies in Texas, making for no shortage of options as his transition team looks to staff the incoming administration.

Lt. Gov. Dan Patrick, who chaired Trump's efforts in the Lone Star State, said early Wednesday morning that he has already provided input on which Texans should work in Trump's Washington.

"I want to be sure that Texas has a big seat at the table, whether it's the energy sector, education sector, medical sector — obviously border security will be an issue," Patrick said in an interview. "So I think Texas will play a role."

Here are eight Texas Republicans who could help fill that table:

Who is he? Perry is the former 14-year governor of Texas, the longest-serving chief executive in the state. In his 2016 presidential campaign, Perry was a vociferous critic of Trump, but once Trump became the presumptive nominee, Perry quickly endorsed him.

How was he involved in Trump's campaign? Perry, Texas' former agriculture commissioner, served on Trump's Agricultural Advisory Committee and spoke at the Republican National Convention. Perry was also a reliable surrogate for Trump in Texas, appearing at many of Trump's fundraisers in the state. In the home stretch of the race, Perry stumped for Trump in Florida and North Carolina.

What role could he serve in Trump's Washington? Perry has said he is open to serving in a Trump administration, potentially in a role that lets him advocate for a longtime passion: veterans. And Trump has been receptive to the idea, saying he would like to get Perry "involved in some capacity at a high level."

Who is he? Miller is Texas' agriculture commissioner. He was not particularly active in the primaries but emerged as a full-throated Trump backer in the general election.

How was he involved in Trump's campaign? In the final days of Trump's campaign, Miller became the nominee's go-to guy in arguing the polls were wrong, but the agriculture commissioner also sparked a firestorm of controversy when a tweet appeared on his Twitter account calling Clinton the c-word. Prior to that incident, which Miller blamed on a staffer, he was best known to Trump as an adviser on agriculture issues.

What role could he serve in Trump's Washington? Like he did during the campaign, Trump would no doubt turn to Miller in the administration to advise on agriculture issues. In a radio interview last week, Miller said he was currently focused on getting Trump elected but did not rule out serving in Trump's Cabinet. "You'd have to consider it," he said.

Who is he? Willett is a justice on the Supreme Court of Texas. As a judge, he never got formally involved in the presidential race — but he has a history of tweets that are less than favorable to Trump.

How was he involved in Trump's campaign? He was not.

What role could he serve in Trump's Washington? Willett was suddenly swept up in the presidential race in May, when Trump named Willett to a list of judges he would appoint to the U.S. Supreme Court. At the time, Willett offered no indication of whether he was willing to serve, saying he respected all the judges on the list and that it spoke to the value of state judiciary.

Who is he? Patrick is the lieutenant governor. He was a top supporter of U.S. Sen. Ted Cruz of Texas during the primaries, heading up his efforts in the Lone Star State.

How was he involved in Trump's campaign? After Cruz dropped out, Patrick quickly threw his support to Trump. He went on to serve as Trump's Texas chairman, becoming the nominee's biggest booster among state's GOP elected officials.

What role could he serve in Trump's Washington? Patrick is seen as fulfilling multiple needs for a Trump White House, but in any case, he has ruled out the possibility. He said Wednesday he has made it clear to Trump's transition team he has "zero interest" in serving in the White House. If any job was offered, Patrick added, he would "respectfully decline."

Who is she? Pierson is a Tea Party activist from Garland. She volunteered for Cruz's underdog bid for the Senate in 2012.

How was she involved in Trump's campaign? On Nov. 9, 2015, the Trump campaign named Pierson its national spokeswoman, and the rest is history. Pierson turned into Trump's longest-running surrogate on television, known for her seemingly nonstop scuffles with cable news hosts over the latest controversy engulfing her boss.

What role could she serve in Trump's Washington? If Trump is looking to run his White House like he ran his campaign — brash and defiant — Pierson is a perfect fit for the press office. She has not publicly commented on whether she is interested, but it is hard to not see his most visible defender throughout the campaign finding a job in Trump's Washington.

Who is he? Beal is the founder and chairman of Dallas-based Beal Bank. He has been called the richest man in Dallas.

How was he involved in Trump's campaign? He was an early participant in Trump's fundraising efforts in Texas and went on to form his own super PAC to boost the nominee. In August, Trump named Beal to his Economic Advisory Council.

What role could he serve in Trump's Washington? Trump clearly trusts Beal on one of the campaign's signature issues: trade. During a Dallas rally in June, following a fundraiser with Beal, Trump mused about putting Beal "in charge of China." Trump then predicted his instructions for Beal in a Trump administration: "Okay, Andy, do me a favor, renegotiate our trade deal."

Who is he? McCaul is a congressman from Austin. He chairs the House Homeland Security Committee.

How was he involved in Trump's campaign? McCaul advised Trump on foreign policy and national security issues throughout the general election, sometimes making clear his disagreements with the nominee — particularly when it came to Trump's friendly attitude toward Russian President Vladimir Putin. McCaul also spoke at the Republican National Convention.

What role could he serve in Trump's Washington? In the interview, Patrick mentioned McCaul as a potential Homeland Secretary or attorney general. McCaul has been relatively open about his desire to serve in a Trump administration, telling the National Journal in September that he would like "to have a Republican in the White House and frankly, a high-level appointment."

Who is he? Hensarling is a congressman from Dallas. He chairs the House Financial Services Committee.

How was he involved in Trump's campaign? As a close friend of Trump's running mate, Mike Pence, Hensarling was a presence on the campaign trail with the Indiana governor. When Pence's plane skidded off a runway last month in New York, Hensarling was in tow (everyone was OK). And it is not just Pence who has turned to Hensarling throughout the campaign: Trump met with the Texas congressman in June to discuss an alternative to Dodd-Frank, the 2010 financial regulations law.

What role could he play in a Trump's Washington? Given his friendship with Pence, which dates back to when they both were in the House, Hensarling may have a range of options when the transition team comes calling. He has not commented on what he may be interested in, but even if he stays in Congress, Hensarling is poised to become a trusted conduit between the Trump White House and the rest of the House GOP conference.

This article originally appeared in The Texas Tribune at https://www.texastribune.org/2016/11/09/texans-who-could-serve-trumps-washington/. 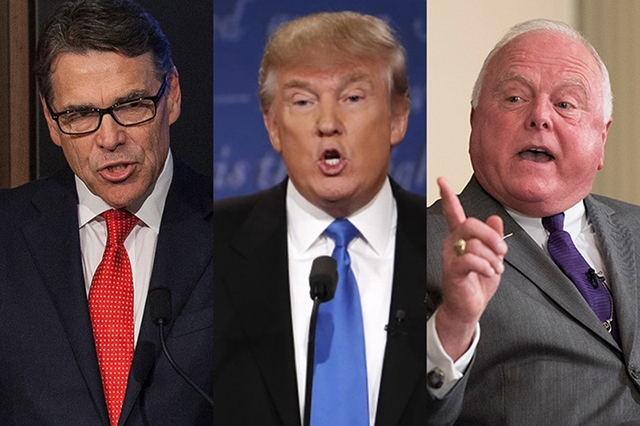