In Texas House, uncertain fate of bathroom bill could reverberate

For weeks, it’s been clear that the Texas “bathroom bill” would face a less-than-friendly reception in the Texas House. After passing out of the Senate this week, the controversial legislation's path forward is up to House Speaker Joe Straus, who has expressed reservations about the bill.

But as leaders in the Texas House hint that the high-profile bill may never reach the chamber's floor for a vote, some are bracing for the fallout to reverberate throughout the remainder of the legislative session.

Senate Bill 6 — a legislative priority of Lt. Gov. Dan Patrick — would regulate bathroom use in public schools and government buildings on the basis of “biological sex,” prohibiting most transgender people from using bathrooms that align with their gender identity. The legislation would also nix local anti-discrimination laws meant to allow transgender residents to use public bathrooms that match their gender identity.

While Straus has not yet announced which committee will handle SB 6, the powerful State Affairs committee is a likely destination. The committee's chairman, Republican state Rep. Byron Cook, indicated Thursday that the legislation would probably receive a hearing if his committee received it, but he was far from enthusiastic about the proposal.

“I think this is a situation that’s been taken care of for a long time thoughtfully [and] respectfully,” Cook said, referring to the issue of bathroom use by transgender people in schools and other public building. Referencing Republican concerns that men would take advantage of trans-inclusive bathroom policies for nefarious reasons, Cook added: “The good news is we haven’t seen evidence of major safety issues. There’s no information to support that.”

That puts Cook in line with Straus, who has said he is not a fan of the bathroom regulations and has warned that lawmakers should be “very careful” about doing anything that would negatively impact the state’s economic competitiveness. Critics of the Texas bill have pointed to North Carolina, which saw the cancellation of national events worth millions following its passage of a similar law.

But speculation that SB 6 may not make it to the House floor for a vote by the 150-member chamber has left House Democrats on high alert for the possibility that some Republican members could attempt to attach bathroom-related legislative language to other bills that make it onto the House floor during the remainder of the session.

A small group of House members — particularly those who are anti-Straus and have organized as the Texas Freedom Caucus — are expected to repeatedly offer up portions of the "bathroom bill" as amendments to other bills in an effort to force a vote on the issues, according to sources familiar with the matter.

“It’s clear that the certain Republican members are going to try to add controversial bills to every piece of legislation that they can,” said one Capitol observer who asked not to be named in order to speak more freely.

James Bernsen, the Texas Freedom Caucus' executive director, said that its members declined to comment. But caucus members have been clear in the past about their support for legislation like SB 6.

Echoing Senate Republicans’ defense of the bathroom legislation, one of the caucus’ legislative priorities is to “protect the privacy of women and girls in all publicly-owned settings.” One of its members — state Rep. Matt Shaheen of Plano — filed his own version of the “bathroom bill,” which was referred to Cook’s State Affairs Committee. And on just the second day of the legislative session, Tyler Republican Matt Schaefer, who leads the Freedom Caucus, unsuccessfully attempted to amend a routine resolution related to House administrative issues to require people in the Capitol to use bathrooms corresponding to their biological sex and not their gender identity.

Since nearly the start of the legislative session, SB 6 has emerged among the most prominent disagreements between Straus and Patrick, with the lieutenant governor going as far as saying that Straus is “out of touch with the voters” on the bathroom legislation. The speaker for his part has emphasized that lawmakers must prioritize the state budget and pressing funding needs, including the state’s troubled child welfare system and school finance system.

Meanwhile, Patrick is turning to the religious community to help put pressure on Straus and the House. This month, he announced he was launching “Operation 1 Million Voices” to build support for the bill among Christians in Texas.

Religious groups are planning to host almost a dozen regional summits between now and April to organize pastors in support of the bathroom legislation. The Texas Pastor Council is looking to recruit 3,000 pastors as part of their efforts to press Straus for a hearing and a vote on the legislation.

And the bill’s author, Republican state Sen. Lois Kolkhorst, was a featured speaker at a Thursday “faith and family” rally on the Capitol steps. After addressing the modest crowd gathered for the event, Kolkhorst, a former House member herself, told reporters that she was not concerned about the reception the bill has received in the lower chamber so far.

"I love the House," Kolkhorst told reporters. "I believe in the House. The House is a wonderful body, and they're a deliberative body and a different body than the Senate, and I rejoice in that. They'll do fine. They need to work their process. They've got a lot of bills. They're working a lot of priorities.”

**Patrick Svitek contributed to this report.

This article originally appeared in The Texas Tribune at https://www.texastribune.org/2017/03/17/texas-house-bathroom-bill-uncertain-fate/.

**Cover Image: With less than a week before lawmakers convene, preparations are underway to welcome members of the state House of Representatives for the 85th session of the Texas Legislature. Photo by John Jordan. Courtesy image, Texas Tribune. 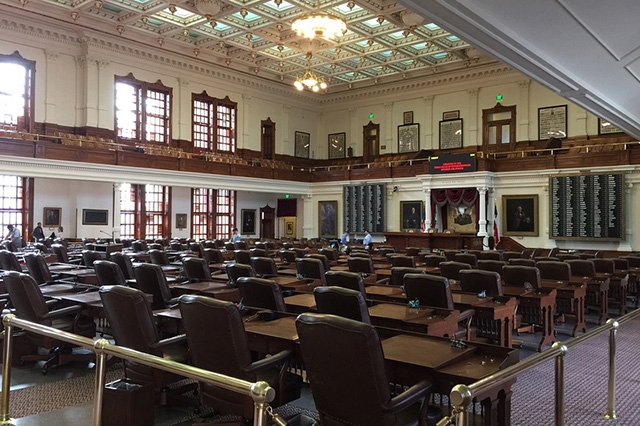