Editor's note: This story was updated on March 15 to reflect that the Senate gave the measure final approval.

The Texas Senate on Tuesday tentatively signed off on the “bathroom bill” on a 21-10 vote with one Democrat — state Sen. Eddie Lucio Jr. of Brownsville  — voting in favor of the bill.

Senate Bill 6, a legislative priority of Lt. Gov. Dan Patrick, would require transgender people to use bathrooms in public schools, government buildings and other publicly-owned facilities that match their “biological sex” and not gender identity. And it would preempt local anti-discrimination laws meant to allow transgender residents to use public bathrooms that match their gender identity.

The vote on the controversial legislation came after a four-and-a-half-hour debate over the bill’s impact on an already vulnerable population, the need for uniform bathroom policies across the state and whether the proposed regulations would actually deter men from entering women’s restrooms.

Before passing the bill, senators considered 22 amendments. Republican senators joined the bill's author, state Sen. Lois Kolkhorst, R-Brenham, in rejecting all but three amendments that make minor tweaks to the legislation but did not alter the main bathroom policies proposed in the legislation.

"We all agree in ways that people will take advantage of open policies,” Kolkhorst said while presenting the bill to the full chamber. Reiterating Republicans’ go-to defense of the bill, Kolkhorst repeatedly cited the since-rescinded Obama administration guidelines on accommodating transgender students as proof that Texas needs a statewide policy to keep men and boys out of women’s “intimate facilities.”

“I think the people of Texas expect boundaries between gender,” Kolkhorst said.

This prompted a long line of questioning from Democrats who insisted that the legislation was a solution in search of a problem and would lead to unnecessary economic fallout.

Citing his long tenure in the Senate, state Sen. John Whitmire, a Houston Democrat, questioned why bathroom concerns were so pressing to Republicans when they were never “brought to us as an issue” before then.

He questioned why Republicans would push for legislation that would lead to the “horrible dilemma” in which transgender women who are “as feminine as any woman on the Senate floor” would be required to use men’s restrooms.

“That, to me, is a fatal flaw in your legislation,” Whitmire told Kolkhorst. "I’m prepared to stand here until hell freezes over to get an answer.”

“I do not have an easy answer for you,” Kolkhorst responded. “Nothing is easy about this.”

“I don’t think there’s an acceptable answer,” Whitmire shot back.

Democrats also raised concerns about the legislation’s “unintended consequences,” with San Antonio Democrats raising concerns about the 2018 Men’s Final Four slated to be held in San Antonio. And they pointed to warnings from tourism officials from across the state that the legislation is already causing organizations to reconsider planned events in their cities — a move that could cost each of them millions of dollars.

While insisting that her proposal was carefully crafted to avoid cancellations, Kolkhorst said that she believed sports associations’ “threats are real” but she insisted that the NCAA and the NFL shouldn’t be “dictating policies” for states.

Kolkhorst also told senators that she had spoken to the NCAA’s president to highlight the differences between the proposed legislation in Texas and North Carolina’s own “bathroom bill,” which cost the state millions in canceled events.

That included championship game cancellations by the NCAA, which has stayed out of the Texas debate.

Throughout the debate, Democratic senators also pressed Kolkhorst on whether Republicans fundamentally misunderstood transgender individuals. They echoed concerns raised by transgender individuals last week during an emotional hearing during which senators heard 13-plus hours of public testimony from hundreds of individuals, largely about the complications transgender Texans face in using public bathrooms.

But Democrats responded that changing those documents requires a court order, which is not easily attainable for most transgender individuals.

“The bottom line, for me, is I think there’s a misunderstanding of human nature,” said Democratic state Sen. José Rodríguez, who has questioned whether Republicans believe transgender women are really men. On Tuesday, he added that the legislation was a result of a “lack of understanding” and fear of transgender people.

Kolkhorst repeatedly said that the legislation was not meant to be discriminatory but rather that it was focused on safety and privacy concerns.

But while she insisted the legislation isn’t focused on transgender individuals, Kolkhorst at one point said that the “blurring of gender will lead to less rights for women.”

More than a dozen amendments by Democrats were rejected, including one that would have added discrimination protections for transgender individuals to the bill and another that would have prohibited individuals from personally investigating the gender identity of someone using a public bathroom. The Senate also rejected amendments that would have required the state to study the bill's economic impact as well as crimes that occur in bathrooms.

Among the minor revisions made to the legislation was an amendment by Lucio to raise the age of children allowed into a bathroom with a caregiver from 8 to 10. A separate Lucio amendment to the legislation’s enforcement mechanism would require a sworn statement or affidavit from individuals filing complaints to the Texas Attorney General regarding bathroom policy violations.

The upper chamber must still give the legislation a final stamp of approval before sending it on to the House. That vote, known as "third reading," could come as early as Wednesday. (Update, March 15: The Senate did give the measure final approval on Wednesday on a 21-10 vote.)

This article originally appeared in The Texas Tribune at https://www.texastribune.org/2017/03/14/texas-senate-signs-so-called-bathroom-bill/. 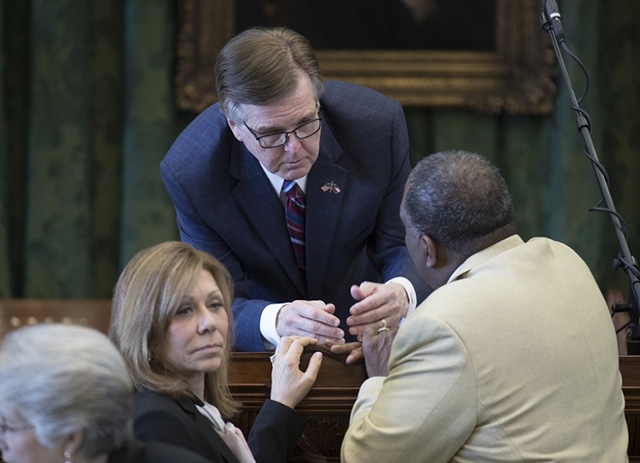