Town Hall on Ferguson: Can it happen here?

"Our black men have a bulls eye on their chest," said San Antonio activist Mario Salas at a panel discussion on Aug. 23 at the Carver Branch Library.

Salas' comments came at a gathering, titled “1968 or 2014? Ferguson: Town Hall Meeting and Discussion,” was hosted by educator and motivational speaker Dr. Ron Kelley to examine events since August 9, when an unarmed black teenager was killed by a white policeman in Ferguson, Missouri.

The death of Michael Brown, who was shot six times, has prompted peaceful, emotional demonstrations as well as violent incidents in Ferguson, which is a part of the Greater St. Louis Metropolitan area.

The teenager's death and the police response has sparked a national conversation about race and social justice.

"It could happen here," in San Antonio, said Kelley, adding no city is immune to what's happening in Ferguson. “A discussion like this lets us have a voice on this incident because there seems to be no face to justice."

Williams pointed to economic inequality, and predicted there would be more civil unrest unless something is done about the redistribution of wealth and power in the United States.

Muhammad called for a cultural change within the black community to love and respect one another, which he said would move others, including law enforcement, to  give more respect to African Americans.

Givens, who grew up in Ferguson, said the city has had major issues plaguing it for the last 20 years such as a lack of jobs and drug addiction. He is leading a grassroots effort called, “Rebuild Ferguson” to provide tools and resources to help black businesses there be more successful.

Some of the solutions discussed at the Town Hall include better police training and monitoring to identify those police who break the rules; educating youth about their history and the accomplishments of the Civil Rights Movement and alerting young black men how to respond to police so they won’t become a target.

A mother of a teenage son in the audience made a passionate plea to  everyone to get connected through social media so there’s a network to call upon if an incident like the one in Ferguson happens in San Antonio. 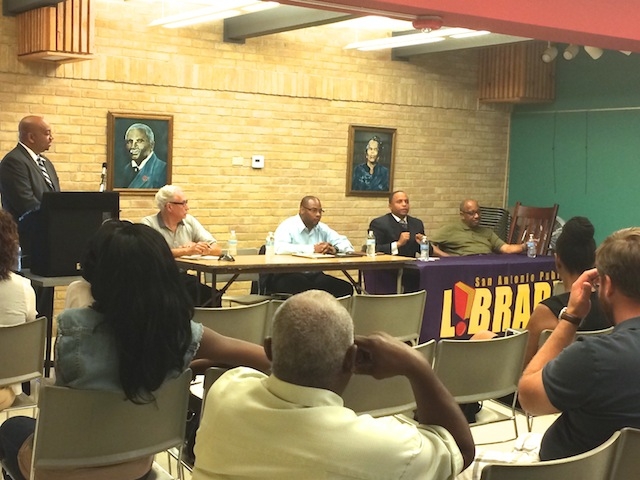