Bexar County Judge Nelson Wolff and Live Oak Mayor Mary Dennis, joining a panel discussion about property taxes on Oct. 13, said they would be open to any way to reduce the tax burden on residents. But they are wary about how some proposals, including one that calls for eliminating property taxes, would impact growing Texas cities.

Wolff and Dennis debated the pros and cons of property taxes with James Quintero of the Texas Public Policy Foundation, and State Sen. Donna Campbell (R-New Braunfels) at the UTSA Downtown campus.

Lt. Gov. Dan Patrick has pledged that the state legislature will take some kind of action in 2017 to reduce the burden on taxpayers statewide. One proposal that has been floating around in recent months calls for decreasing the threshold for an election on rollback tax rates from 8 percent to 4 percent.

Currently, if a taxing entity proposes a property rate increase of 8 percent, residents may petition for an election. Advocates of reducing property taxes say median incomes of most Texans have not kept pace with rising local property taxes or revenue that those taxes provide to growing cities.

The same advocates say present forms of property tax relief, such as homestead exemptions, do very little for those impacted.

The term revenue cap has been thrown around in the debate lately, but Campbell said what she and fellow tax reform advocates hope to do is decease the rollback rate threshold. Instead, she argues for an automatic triggering of an election at a 4 percent rollback rate.

“The rollback rate is 8 percent, but it’s not a cap. A city can exceed it,” she added.

Quintero, who directs the TPPF's Center for Local Governance, said a decreased rollback rate and automatic election trigger should apply to every taxing governmental unit in Texas.

Quintero added, in such a case, the taxing entity would be encouraged to prioritize its expenditures.

Quintero explained it behooves people to get involved in the public process by following the budgeting process of those taxing entities, but understands that’s simply not possible. He said he had eight taxing entities on his tax bill. He added that the current property tax system, as well as income tax system, is convoluted and difficult for the average person to comprehend.

“I don’t have time to track every government unit’s budget,” he added.

Wolff said he has no problem with methods in which to relieve the taxing burden, but is concerned about how that may lead to a severe reduction on revenues for growing areas such as San Antonio.

Wolff added that if a rollback election were needed, it would add to the costs of holding an election. The county has had to hold several special elections in the last few years, including filling vacant legislative seats such as House District 120.

Wolff said he would rather concentrate on seeing reform of the appraisal system, in general. Dennis emphasized how property taxes contribute to the basic services her small city northeast of San Antonio.

“We provide basic services like police, fire, streets,” she added. Live Oak is in what is called the Metrocom, an area of suburbs surrounding Joint Base San Antonio-Randolph.

These suburbs have experienced (including Schertz, Cibolo, Universal City, Converse and Selma) significant population growth and economic development in the last 15–20 years.

Wolff said if a cap of sorts is implemented on property taxes, growing areas such as San Antonio would have a hard time raising revenues as usual and meeting rising demands for services.

“Metropolitan areas are the economic engines of Texas” he added.

Quintero said proposed strategies, such as decreasing the rollback tax rate threshold, are intermediate solutions toward a long-term answer - the complete elimination of property taxes in Texas. He went to explain, ideally, the elimination would involve the transition toward expanding the state sales tax. In such a situation, Quintero said over-taxed businesses can grow and residents can hold onto more income.

The state legislature then could use a “consumption tax” formula of sorts to distribute revenue among taxing entities that had relied primarily on property taxes.

Quintero and Campbell said they generally agreed with the idea of property tax appraisal reform, but felt that is more of a temporary solution and want to see more information about it.

Wolff and Dennis, meanwhile, said they are worried about what they see as a rising amount of state-mandated proposals aimed at curbing local control. Mayors of some larger Texas cities recently lobbied the state about how negative proposed revenue/property tax rate caps could be on growing areas.

“Local control is a tool, but it’s not the be-all, end-all,” Quintero said.

Campbell added her version of how local control means voters are more empowered and have the chance to voice their feelings on a city or county’s budgetary actions, such as expenses.

Wolff said many Texas residents have a good amount of power in the form of initiative, reform and referendum. Plus, anyone can run against an incumbent in an election, and there are term limits for the San Antonio City Council, he added.

The county judge said the solutions suggested at the Thursday townhall really don’t attack the crux of the issues head on.

“This is just nibbling around the edge,” he added. 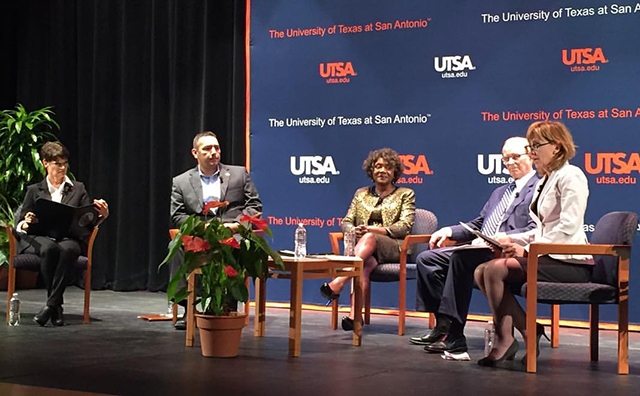