The Trump administration on Wednesday rescinded guidelines issued by former President Obama that directed public schools to accommodate transgender students — a move that will do little to deter conservative leaders in Texas from moving forward with the "bathroom bill" currently in the Legislature.

Pulling back on federal protections for transgender students, the administration moved to withdraw the guidelines — which required schools to allow transgender students to use bathrooms that align with their gender identity — because of "legal and procedural" concerns related to how they were issued.

"The prior guidance documents did not contain sufficient legal analysis or explain how the interpretation was consistent with the language of Title IX," U.S. Attorney General Jeff Sessions said in a statement.

The withdrawal of the guidelines leaves Congress, state legislatures and local governments "in a position to adopt appropriate policies or laws" on the issue, Sessions added.

Emboldened by the administration's focus on state control over the issue, it appears that Texas Republicans will still move forward with the proposed “bathroom bill," which was filed, in part, as a response to the Obama directive. That directive has been blocked by a Texas-based federal judge since last year.

At issue are guidelines released in May 2016 by the Obama administration in which it claimed that discrimination against transgender students violates Title IX, a federal statute prohibiting discrimination based on sex at institutions that receive federal funding.

Those protections, the Obama administration indicated, extend to gender identity and give transgender students the right to use their preferred bathrooms in public schools. The guidelines do not have the force of law, but school districts could risk losing federal money if they do not comply.

LGBT advocates praised the guidelines as a step forward to ensure transgender students can learn in a discrimination-free environment. But after a 2015 fight over a nondiscrimination ordinance in Houston that was reduced to bathroom concerns, Republicans had already set their sights on defeating similar policies.

Lt. Gov. Dan Patrick — who waded into the Houston fight — called on the Fort Worth ISD superintendent to resign after the district moved to approve its own policy to accommodate transgender students just before the Obama administration issued its guidelines.

Since then, top Texas Republicans have, in part, cited the guidance as a reason why the state needs a law that would regulate bathroom use in public schools and other places. When Patrick and state Sen. Lois Kolkhorst of Brenham unveiled Senate Bill 6, the bathroom legislation, they cited Obama’s “edict” in explaining why the proposal was necessary.

After the Trump administration issued the guidelines, Kolkhorst applauded the federal government for rescinding the guidelines and acknowledging that the issue should be left up to states and local school districts.

"Therefore, we will continue to work diligently in crafting the Texas Privacy Act to ensure that our state provides a non-discriminatory solution for all Texas students and the general public in these most intimate settings," Kolkhorst said in a statement. "The people of Texas must define for ourselves what boundaries are expected in our public facilities."

SB 6 would require transgender people to use bathrooms in public schools, government buildings and public universities based on “biological sex” and would pre-empt local nondiscrimination ordinances that allow transgender Texans to use the bathroom that corresponds with their gender identity.

On Wednesday, Patrick reiterated that the fate of the Obama guidance is not directly linked to the need for legislation on bathroom policies.

"We agree with President Trump that this is a state issue," Patrick said in a statement, adding that SB 6 would allow schools "to continue to determine how they will accommodate students with individual needs, as they have always done."

Meanwhile, Gov. Greg Abbott — whose office also did not respond to a request for comment — has suggested the fate of the guidance could factor into his decision whether to support or oppose the "bathroom bill." Abbott said last month that Obama created a "new paradigm" in public schools by issuing the guidance.

"You have parents of kids in schools that have legitimate concerns about this new situation that their children are put that we’re going to have to address," Abbott told the Tribune in an interview. "Now, it may mean dealing with the administration in Washington, it may mean we come up with some new laws. What’s important is that we find remedies that allay these concerns of parents about the situation their children have been put in."

Despite conservatives’ outcry over the guidelines, the federal government has been blocked from enforcing them.

Fort Worth-based U.S. District Judge Reed O’Connor blocked the guidelines nationwide in August, issuing a ruling on the same day millions of Texas children headed back to school. In a 38-page order, O’Connor sided with Texas and 12 other states challenging the federal directive, saying the “status quo” should remain in place nationwide until the court rules on the case or a federal appeals court provides further guidance because the administration had not followed proper rule-making procedure in crafting the guidelines.

O’Connor did not, however, rule on the merits of the case.

In its final months, the Obama administration filed notice that it would appeal the lower court’s injunction to the U.S. 5th Circuit Court of Appeals. But the Trump administration took a step back from that appeal this month.

In a joint filing with the states that sued the federal government, the Justice Department on Feb. 10 withdrew a request that the U.S. 5th Circuit Court of Appeals take up the lower court’s injunction and asked that oral arguments on the matter — originally set for Feb. 14 — be canceled.

“The parties are currently considering how best to proceed in this appeal,” the filing read. The court granted those motions the same day.

STORY BY: BY ALEXA URA

Patrick Svitek contributed to this report.

This article originally appeared in The Texas Tribune at https://www.texastribune.org/2017/02/22/trump-expected-rescind-protections-transgender-students/.

**Cover Image: Now-President Donald Trump is shown on Jan. 28, 2016, speaking to a group of veterans at Drake University during the 2016 Republican presidential campaign.  Bob Daemmrich for The Texas Tribune. 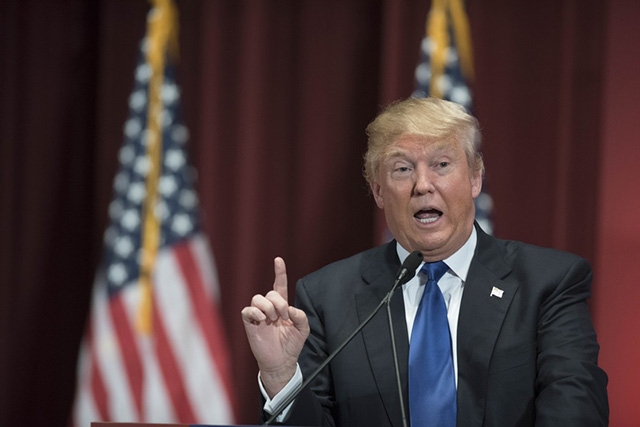