John Webb is a practicing architect, professor in UTSA’s architecture program, an artist with an MFA from UTSA (emphasis on sculpture), and a master craftsman employing all his training to create exquisite, masterfully crafted sculpture using bodily and mechanical forms as well as ingenious furniture art whose aesthetics please and intrigue the eye.

The Prospect and Refuge Exhibition opens Nov. 12, from 7 p.m. till 10 p.m. at Bill FitzGibbon’s Dock Space Gallery in the Lone Star Art District at 107 Lone Star Blvd. Webb’s artist statement is telling yet leaves much to the imagination:

“The sculptures exhibited in this show were chosen from a number of different series of works. However, a fundamental idea unifies them: inventive spaces are conceived which draw on my background as a practicing and educating architect. Each piece begins with a generating idea which relates to considering the normally utilitarian application of plywood and employing it as a sculptural material.”

Upon close inspection, a pair of lips inset upon a curvilinear block of wood, their fullness brought to life with the crushed glass of Raspberry Absolut bottles, boggles the mind; it is difficult for the viewer to imagine this sculpture is comprised of layered plywood. It is so well put together, has its’ own informed elegance, and blusters with the sharpness of lips screaming caution. And in so many ways Webb delivers consistently with the other pieces in this show.  His artist statement leaves a surprise for the viewer.  Webb validates this belief through a statement given during an interview:

“Sculpture ought to be interesting and curious, develop questions by looking at it...”

Webb related a curious story about cogs briefly: “One day I was tubing in the Guadalupe and on the bottom, I found this gear and it was just beautiful.  It was made from aluminum or something. About a week later I found another gear in front of the house and it just got me to thinking why am I so attracted to these gears?  It’s something about representing work.”

Architecture is fundamental to John’s work, and incorporating a high-rise crane, cutting vertically across a headless human form is the type of work that’s thought provoking leaves one with questions long after the viewing. His work “Budapest” was submitted to the Third Annual Artspace 111 Regional Juried Exhibition in Ft. Worth and garnered third place beating out thousands upon thousands of other entries.

Webb explained how he was inspired to create this work which illuminated his earlier statement concerning gears and the idea of work and ‘body of work’:

“This piece is called “Budapest” but I actually got the idea when I was in Berlin because there are so many cranes up in the air over the city.  They must’ve been building for the last 25 to 30 years…I don’t know why I love cranes but again there’s that idea of getting work done mechanically.”

This is something that did not escape FitzGibbon’s sensibility.

"I’ve long been an advocate of viewing architecture as art…I’ve been a real advocate for contemporary architecture. John has degrees in Architecture and an MFA in Sculpture and he designs furniture. He is a master craftsman….his work is absolutely, perfectly put together, and his imagery is kind of a combination between architectural forms and the human form…," he said.

To view works from both artists, please view the photo gallery below: 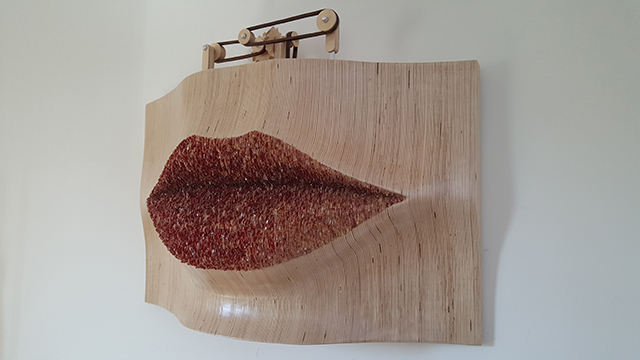 Kat Shevchenko has studied painting at UTSA and spent time in Austria studying the Old Master’s technique of painting with oils over egg tempura under paintings. Her work is channeled through the lens of surrealist automatism. She builds a rich, personal mythology employing symbolism drawn from many sources of which the renaissance is one.  Her latest showing, “Crux” will be this Second Saturday at Provenance Gallery, 1906 S. Flores, Nov. 12.

Upon close inspection, although Shevshenco has her own visual style, her work recalls Albrecht Dürer’s allegorical paintings or perhaps the work of Mark Ryden.  Either way, the fantastical images, such as a woman who is part ibis with trees growing atop her head or a woman with a grey grape-like convoluted cloud issuing forth from or entering her head and neck.

"Crux is documentation of the internal world of the psyche in the moments of upheaval.  When I came across the word “crux”, meaning the core or essence of something, [it] resonated with me. I knew that was the impetus of what my current paintings’ theme had been revealing. While I created them, I was battling my internal morass with the need to reconcile changes that had transpired within and without. Life’s trials and struggles produce alchemical reactions that forever transmute the self. In “Crux” I longed to capture the beautifully chaotic process of transformation at the pivotal moment as it transpires, or in the wake of its aftermath. This mysterious process depicted in the feminine embodiment with symbols from the natural world to reveal what is simmering beneath the surface of the consciousness. At times, devastatingly emotional, at other times existentially retrospective, these are the introspective journeys within that are seldom seen.”

Nonetheless, her images please the eye and raise questions on their origins concerning what precursors brought them to life. Shevchenco explains that “some precursors were Carl Sagan essays while I was initially conceptualizing the show. There is a famous quote about how the mind cannot comprehend the molecular structure of a grain of salt; the number is too vast for the brain to compute. That wonderment and understanding, that we can never really know everything, is really fascinating to me.”

Shevchenco’s work is filled with wonderment, a sense of awe, and her palette is rich and aptly used. Her employment of the egg tempura method aids in bringing these works to life. The pensive quality, filled with symbolic imagery, of these works is sure to startle the viewer into submission, feet planted before the image.

The “alchemical” changes taking place within her works capture the intended moments Shevchenco speaks of in her artist statement. There is a sense of upheaval in some and even the quality of an aftermath in others-it can be deduced that a maelstrom of change is occurring or that some form of transformation has taken place.

In this, the viewer can also sympathize with her work. Shevchenco stated that, “after experiencing a tumultuous period in my life, I felt the need to portray the moment when an event metamorphoses your being entirely. You are not the same being you were before, and sometimes that is an ongoing process; other times it is quite abrupt. I feel this is a universal theme that resonates with everyone.” 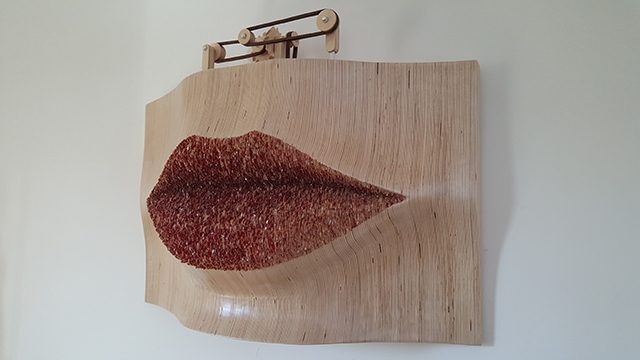