Two Texas mosques burned to the ground this month

The two fires come amid a time of increased unease within Muslim communities across the country.

Shakeel Rashed, executive board member of the Islamic Center of Lake Travis, said the January 7 blaze that destroyed the progress made in building the facility immediately worried Muslims in the area.

“The initial reaction from the community was ‘Hey, this is definitely a hate crime.’ Some kids actually put that on Facebook and Twitter,” Rashed said. “But I told them we can’t say that yet, until we determine the cause.”

The Victoria fire occurred hours after President Donald Trump signed an executive order that in part restricted migration from seven Muslim-majority countries, sparking chaos and distress at airports across the country.

That timing drew national attention to the incident. In two days, the Victoria center, which serves about 40 families, has raised nearly $900,000 toward rebuilding, according to a crowdfunding page.

“The community has responded wonderfully with support," said Dr. Shahid Hashmi, president of the Victoria Islamic Center. "Every trait, religion, race – everybody showed up and has been very supportive. That’s been uplifting.”

Both the Victoria and Lake Travis fires are currently under investigation and neither cause has been made public. On Monday, the Austin American-Statesman reported that federal officials have determined the cause of the fire that destroyed the Lake Travis facility, but authorities were delaying the release of information because of the investigation into the fire in Victoria.

This was news to Shakeel Rashed, executive board member of the Islamic Center of Lake Travis, who said Monday afternoon that they had expected to hear from the fire marshal within the next week or two.

While he doesn't yet know the cause of the Lake Travis Center fire remains unknown, Rashed is certain that the mosque will be rebuilt. The center has raised more than $50,000 of it's $400,000 goal toward rebuilding.

“There are a lot more people who are in support of us building this back again than people who oppose us but it takes one crazy guy to do something,” Rashed said.

That’s why he is intent on the center improving security as it rebuilds.

“Everybody believes we need to be more vigilant,” Rashed said. “When we start reconstruction we definitely want to plan the security of the place better, have more cameras.”

Rehman Siddiqi, president of the Islamic Center of Lake Travis, said he wondered if there was any connection between the two Texas mosque fires but couldn’t say for sure.

“It could very well be an accident but whatever it is, it was a mosque and it is still a loss. They should rebuild it,” Siddiqi said, referring to the Victoria Muslim community. “They should not be scared of these elements. By not building it, you’re encouraging them to keep doing it.”

This article originally appeared in The Texas Tribune at https://www.texastribune.org/2017/01/30/two-texas-mosques-burned-ground-january/.

**Cover Image: The FBI, ATF and other agencies sift through the burned remains of the Victoria Islamic Center a mosque in Victoria on Jan. 29 2017. Photo by Bob Daemmrich for The Texas Tribune. 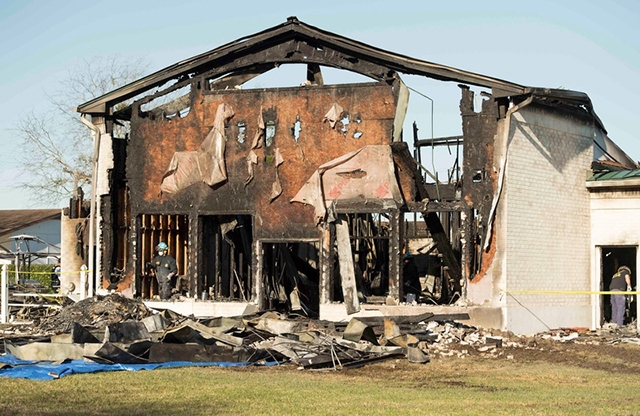