After earning her Ph.D. in geology, Lauren Browning worked for NASA as a geochemist and for the Nuclear Regulatory Commission. But all the while, her heart desired a career in fine art. So in 2007, she made the decision to forego geology for full-time stone sculpting.

“Stone sculpting uses every aspect of my mind I have to offer – my creative side, my analytical side,” she said. “At the same time, because I become so focused on my work I get into a meditative state that is intoxicating, and I have to go work on my stone sculptures.”

Browning will display seven pieces of stone sculpture, some of which consist of metal or metal components during a joint exhibit with abstract painter Sandy Whitby titled, “Unfolding Dimensions,” that opens with a reception from 6 p.m. to 8 p.m. Friday, Feb. 13 at Musical Bridges Around the World, 23705 IH-10 West, Suite 101, 78257. The exhibit continues through March.

On exhibit will be “Ancestral Quest,” a sculpture of mahogany on stained limestone. “This piece represents a couple of firsts for me. It's my first wood carving and also the first time that I've ever painted a stone,” Browning said. “When viewed from a different angle, the limestone ‘base’ looks reminiscent – to me, at least – of an old adobe building in ruins. I wanted the lower portion of the piece to have a color similar to that of an earth-toned adobe house with the pinkish light of sunset on it, so I just had to make that happen.”

Browning said she considers herself a “direct stone sculptor,” meaning that “I do not make plans or draw out my designs in advance. Instead, I work on my designs the entire time that I'm sculpting. My design ideas unfold slowly, as I cut, chisel, grind, and even sand my pieces.”

A self-proclaimed “Texas Hill Country girl,” Browning finds inspiration in almost everything she sees around her: a mud puddle, pipes strewn along a highway or shopping carts stacked together. She also believes there are similarities in what she did as a geochemist and stone sculpting. “There is a strange connection between my art and geology,” she said. “I have an obsession with how lines and curves fit together, and it reminds me of what I used to do as a computer modeler on geological problems.”

Long before Sandy Whitby moved to San Antonio, where she rekindled her love of fine art, she worked in Pittsburgh for public television station, WQED, honing her early art skills as an art assistant for “Mister Rogers’ Neighborhood.”

“I painted sets and had to disguise anything that had a name brand on it,” Whitby said. “It was great, and I even worked with a lot of crazy people like (actor) Michael Keaton. He was one of the crew members. And Fred Rogers had a great sense of humor, which most people don’t know about. He loved to joke with people.”

After moving here, Whitby worked for several advertising agencies before studying with accomplished painter Alberto Mijangos and discovered her interest in abstract painting.

“I like to work with large-scale pieces,” she said. “I start out by painting a canvas while it’s on the floor, and then I start to see something that works with my aesthetic. It’s very physical, and I allow anything to happen. I move the paint with mops and brooms. At the same time, something becomes interesting to me in a non-objective way, and I stand the canvas up and work on it vertically so I can simplify the work.”

Whitby will exhibit several large-scale, mixed media works as well as a few smaller paintings, including “Blue,” a 5-1/2-foot by 5-foot painting using enamel and roofing tar. “The act of creating is simply about the energy of discovery,” she said of her work.

Anya Grokhovski, MBAW CEO and artistic director, said both artists were selected for the exhibit because of their feminine sensibility whose works complement each other. “I admire their sophisticated color palettes and great attention to detail,” she said. “Lauren Browning’s sculptures remind one of a naturally draped, translucent fabric in the wind while Sandy Whitby’s paintings offer a glimpse into the play of nature.” 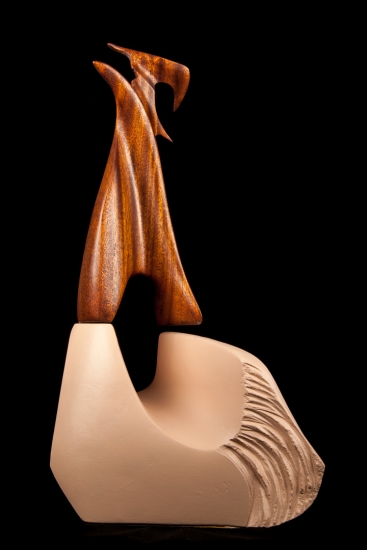