During a March 9  town hall on Senate Bill 6 (SB6) “the bathroom bill” was disrupted by audience members protesting a lack of transgender representation on the panel.

If signed into Texas law, the Republican-backed measure will force people to use public restrooms matching their biological gender, rather than the gender they identify with, which would primarily affect the LGBTQ community.

Minutes into the debate, many audience members stood up and walked out, protesting and shouting, “trans rights are human rights.”

The debate, hosted by Sinclair Media (News 4 - WOAI) and held at the Tobin Center for the Performing Arts had a five-person panel that included a military veteran transgendered male, Kolby Balcon, to give first-person personal commentary on the issue.

“I’m mad for all of the transgender people that I represent in fighting this bill..this kind of discriminatory law can really have an effect on people’s well-being,” said Balcon.

The debate continued with chants of protest being heard from outside the studio. Host Randy Beamer believed the walk-out was possibly premeditated.

Watch a video of the protesters below.

In North Carolina a law similar to SB6 prompted the National Basketball Association (NBA) to move the 2017 All-Star Weekend to New Orleans.

The Texas Association of Business said Texas may lose billions of dollars if the bill becomes law.

In 2016 most of Texas did not grade well with the Human Rights Campaign’s Annual Municipal Equality Index.

An article by the San Antonio Current reported San Antonio graded differently receiving a 95 out of 100 for its progressive policies towards the LGBTQ community.

According to the 2015 U.S. Transgender Survey, 68 percent of transgender people in America have not changed the gender marker on their birth certificates.

Senate Bill 6 may have negative impacts on a transgender person if the sex on their birth certificate does match their gender identity. One topic discussed by the panel was the possible crime risk associated with LGBTQ accommodating bathrooms.

Weston Martinez supports the “bathroom bill” and believes it will protect women and children from potential predators.

Ana Perez, Licensed Master Social Worker, who has dealt with sex abuse and sex trafficking, opposes Senate Bill 6 and spoke to the panelists.

“I gave them the statistics, 90 percent of sex abuse and sexual assaults comes from a family member or somebody that a child knows and that’s facts...I don’t feel that this bill is going to all of a sudden stop sexual assault,” said Perez.

Perez also noted that according to the Rape Abuse Incest National Network (RAINN) only 7 percent of reported child sexual assaults were by a stranger.

“Right now we have laws on the books throughout our great state that already prevent against many pedophiles that would be trying to be a predator of any type,” said Cavazos.

Lieutenant Governor Dan Patrick is in favor of Senate Bill 6 and made it a priority for the 85th Legislature to pass. He was invited to be on the panel along with SB6 author Sen. Lois Kolkhorst. The town hall meeting abruptly ended when a fire alarm forced everyone to exit the building.

**Cover Image: Lauryn Farris, an activist for transgender equality, walks out of the town hall. Video Still by Sinclair Media. 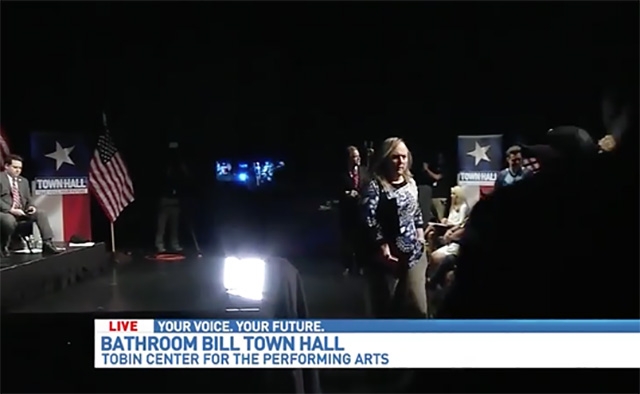