In the first line of questioning, Casey said many neighborhood associations are worried that their neighborhood plans seem irrelevant to the city. This has been especially true in light of the city’s adoption of the SA Tomorrow long-range plan. Medina said San Antonio has a city manager and a mayor who they think “they know better” about neighborhoods than neighborhoods do.

“We certainly have to work better with neighborhood associations,” he added.

Watch the video of the debate below.

Nirenberg said finding an affordable place is one challenge for newcomers and for current residents wanting to move to another neighborhood. But he also acknowledged residents in many older, existing neighborhoods who feel like “the walls are closing in” as more infill development is raising density in the city.

“Neighborhoods are the fundamental building blocks of a great San Antonio,” he added.

Nirenberg voiced concern, also, with recent actions by the city’s zoning and planning commissions that side more often on the side of development. The councilman called for action to eliminate “conflicts of interest” on both commissions. Taylor advocated the growth of stable, mixed-income neighborhoods, but said the city can improve how it engages neighborhoods to better address their worries and ideas.

“I think we can accommodate growth and density,” she said. “When we look at the inner city, they probably had more people than do they do now. There are many vacant lots.”

In a related question, Casey asked the three candidates how they would address gentrification.

“The average San Antonian can no longer afford the average home in the city and that’s a big problem for our economy,” replied Nirenberg. “We do not have a policy that protects people from being displaced by all this growth and that’s what we need to concentrate on.”

Taylor said the Mayor's Task Force on Preserving Dynamic & Diverse Neighborhoods has helped the city to zero in on gentrification and affordable housing. She added that the city’s $850 million bond includes a proposition that would allocate $20 million towards affordable housing development.

“There’s not going to be one thing, but many things” toward the solutions,” Taylor said. “We have to make sure those homeowners who have been invested to have opportunity to continue.”

She also said the city should work with the state on how it allocates housing tax credits. Medina called gentrification an unfortunate side effect of an otherwise successful “Decade of Downtown” initiative, which Julian Castro advocated during his time as mayor.

But Medina said the mayor has the capability to be a leader in “reigning in” rising property value appraisals, which he said is also forcing many residents out of their homes. He also supports reducing the city’s property tax rate to bring relief to homeowners.

“As Bexar County has done, when the appraisals rise, the tax rate should fall,” Medina added.

Casey called out Medina for backing Senate Bill 2, which is currently under consideration in the state legislature. The bill would cut in half the amount a tax rate may go up before triggering a rollback election. The current threshold is more than 8 percent. In larger counties, 7 percent of registered voters would be needed to sign a petition calling for a rollback election.

Supporters of SB-2 say it force cities to be more thoughtful when it comes to spending, and bring relief to taxpayers. But opponents, including leaders of several Texas cities and counties, say such curtailments would impair the ability of growing cities and counties to adequately meet their basic needs. Critics also say SB-2 would yield little relief - less than that which supporters pledge.

Casey said Medina’s support for the bill runs counter to his ambitious mayoral agenda, which involve his desire to address intergenerational poverty on the West Side, violence on the East Side, traffic gridlock on the North Side, and lack of basic infrastructure on the South Side.

“I don’t think it’ll cost that much money,” Medina replied. He added the bill would make cities more accountable to taxpayers, and empower voters. “The city would have to live within its means,” he added.

During the forum, Medina also criticized various local efforts toward long-range comprehensive planning, saying they overlook meeting current basic needs of today’s San Antonians. Nirenberg had a comeback for that: “Too little planning for tomorrow is why we’re stuck in the gridlock today. Too little planning means planning for failure.”

As for SB-2, Nirenberg called the proposal “a gimmick that will have no impact on your pocketbook.”

Taylor shared those sentiments, saying SB-2 would provide no real relief for taxpayers. She also reminded the audience that the city has not raised its property tax rate in several years.

“The real elephant in the room is school taxes. That takes up most of the tax bill,” she added.

Casey and the three candidates went onto to other issues, such as local protections for the LGBTQ community. Specifically, they focused on the proposed state Senate Bill 6 - the so-called “bathroom bill” aimed at transgendered individuals.

Medina agreed with critics of the bill, saying it is not morally right and that it could make San Antonio unattractive to new businesses and special events.

“It’s a solution looking for a problem that doesn’t exist,” Nirenberg said of the bill.

Regarding its respect of diversity and inclusion, Nirenberg said the city’s Office of Diversity and Inclusion should continue to maintain the local non-discrimination ordinance, and that the LGBTQ community is represented in city government. Taylor said the Office of Diversity and Inclusion, which has been formed in the last two years, has been an asset to the city. She also agreed with Nirenberg and Medina that the bathroom bill, if adopted, would yield a negative impact on the community.

“We are diverse, welcoming city,” she added.

Regarding sanctuary cities for undocumented immigrants, Nirenberg and Taylor pointed out the city has no such formal designation. But Nirenberg did say while local police may cooperate with immigration authorities however they can, police officers are not equipped to serve such functions in a thorough way.
He added that compounding patrol and administrative duties of local police, with immigration enforcement, would impair officers’ ability to uphold basic public safety.

“I trust the opinions of our police chief than those of politicians in Austin or (Washington) D.C. when it comes to public safety in our community,” he added.

Taylor agreed that police could and should cooperate with immigration officials, but not be tasked with things such as requesting the immigration status of a new detainee. Taylor also said San Antonio acting like a sanctuary city could jeopardize the city in future efforts to secure state and federal funds.

Medina said San Antonio, in many ways, is already a sanctuary city given the makeup of its population. He added that immigrants should not treated as scapegoats because most follow laws, raise families, own businesses and pay their fair share of taxes.

With the obesity issue and helping locals to eat healthier, Taylor said the Mayor’s Fitness Council and FitCitySA campaign have helped to promote healthy eating and exercise. She also said the SA Tomorrow comprehensive plan lays out polices toward making healthy food more affordable and accessible in lower-income neighborhoods by making it easier to introduce urban farms, and encouraging stores to market healthier options. She added the Food Policy Council of San Antonio is one such group that could help achieve this goal.

“It’s going to take a private/public partnership to execute some of those policies,” she added.

Medina said the mayor and the council could increase leadership in promoting healthier diets among residents, especially diets that cut down or eliminate salt intake. He also called for improving local public health by focusing on making services such as oral health, children’s and prenatal care more accessible and affordable. Medina said the San Antonio Metropolitan Health District could help with this objective.

Nirenberg said public health can also be helped with the continued expansion of greenways trails and by improving air quality. He also talked up the services offered by the Health Collaborative.

Where transportation is concerned, Medina said he wants to be known as “the transportation mayor.” He called for making commutes 10 percent faster on the city’s most heavily traveled corridors by the end of 2017. Medina also pushed support for Councilman Rey Saldana’s call that some of the local Advanced Transportation District revenues be allocated to help VIA Metropolitan Transit’s services. He advocates incentivizing local businesses to let more employees work from home. He also advocates a commuter rail line between Austin and San Antonio.

Nirenberg said the city and its partner agencies should prioritize major corridors for traffic congestion solutions. He also supports development policies that discourage further sprawl. He also agreed with increasing funding for VIA, and for implementation of a comprehensive multimodal plan that includes rail.

“We need to leadership to put that before voters and I believe i can do that,” he added.

Taylor said local transportation could benefit from implementation of the SA Tomorrow plan, which features the “live/work/play regional centers” concept where many residents work and recreate closer to home. She also said the city’s bond issue, with its $445 million in proposed street, bridge and sidewalk projects, could also upgrade citywide transportation. 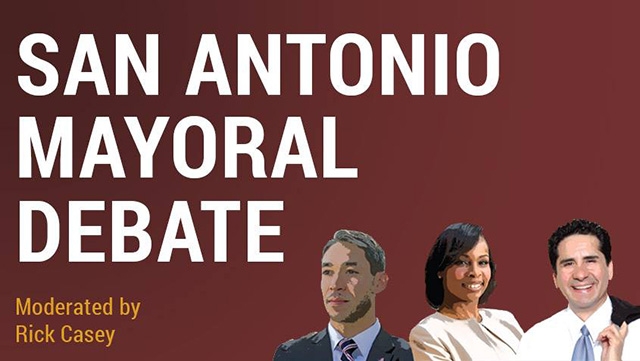