The City Council voted unanimously Thursday, Feb. 2, to adopt an urban renewal plan, which could implement the city’s proposed $20 million housing bond, if voters were to approve it May 6.

The housing bond is part of the $850 million bond that is designed to address infrastructure, facilities, drainage, parks and recreation. See more about the neighborhood improvements bond here.

Called the neighborhood improvements category, the housing bond - the first of its kind in San Antonio - would allow the Office of Urban Redevelopment (OUR) to use the voter-approved bond funds to buy vacant or abandoned properties in 12 select areas that the city identified as distressed.

All but one of these areas are inside Loop 410, with a handful of them on the West and East sides.

Watch the full video from the City of San Antonio's council session below.

Mayor Ivy Taylor said because of the uniqueness of the housing bond effort, many factors are to be considered by the city and community members to ensure its success in implementation — given voter approval.

“I’m pleased to see use being creative in meeting the needs of our communities,” Taylor said.

The funds would be used to clean up the properties, and improve infrastructure in those areas. Then the city would market the properties toward nonprofit or private developers.

A neighborhood improvements bond committee, made up of appointed residents from all 10 council districts, met five times last fall to review the proposed housing bond and the areas selected by city staff.

Staff had originally tapped 18 areas, but the committee wound up approving 13 areas, with a controversial late addition - the Oak Hollow mobile home park on the Northwest Side. That’s where the leakage of raw sewage spark a struggle between the park’s owner and the city over the safety of residents there and their ability to stay in their homes.

But the council’s housing committee met in late January to remove Oak Hollow from the list of areas after the city realized the existing neighborhood plan restricts the type of development proposed in the housing bond.

Aside from Taylor, several council members said the housing bond, if approved, has potential to bring much-needed improvements to distressed inner-city neighborhoods.

However, some organizations such as COPS/Metro Alliance have expressed concerns that the housing bond will not adequately address residents in existing distressed communities in the select areas or elsewhere.

Critics also fear any new developments resulting from the housing bond may exacerbate occurrences of gentrification, a long-running issue in neighborhoods such as Dignowity Hill on the East Side.

District 1 Councilman Roberto Trevino said the bond is a chance to comprehensively address the long-standing problem of a lack of housing for low-income and working-class residents.

He added the products of redevelopment could be “safe, welcoming homes for families and reinvestment in our neighborhoods.”

Trevino did get to amend the motion to approve the urban renewal plan — an addition of verbiage that reemphasizes a need for community members to stay engaged in the process of redeveloping these properties.

To this end, the council has authorized the creation of a Neighborhood Improvements Advisory Committee. The 17-member panel will advise OUR and the city, on an ad-hoc basis, on proposed development projects in the select areas.

The committee membership would include 10 residents representing the 10 council districts, appointed by his or her respective council person; five residents, appointed by the mayor, living inside one of the select areas; one committee chair; and one representative of the city’s housing commission.

In order to facilitate greater collaboration with neighborhoods and communities, City Manager Sheryl Sculley formed a Neighborhood and Housing Services Department, which will administrate the city’s housing policies and programs, housing development, management of Fair Housing and Homeownership programs, administration of related grants, and, if approved by voters May 6, implementation of the housing bond. 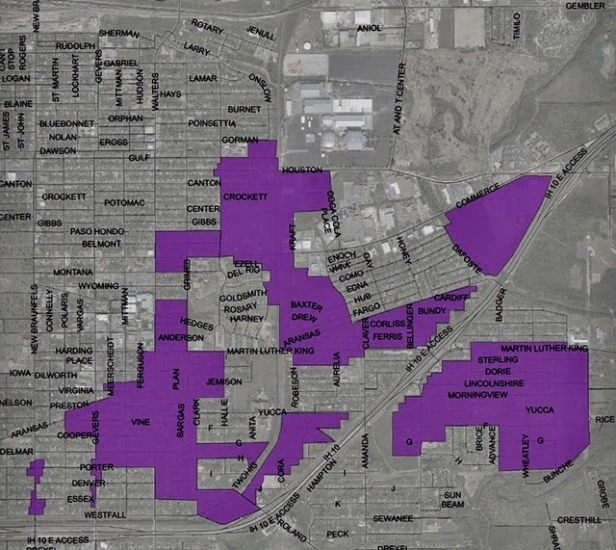