A new master plan for San Antonio's Brackenridge Park has drawn hundreds of residents to recent public hearings, all but unanimously in opposition to the proposal.

Many residents, some claiming generational attachment to the park, are concerned that the changes will ruin a place they cherish.

The proposed plan would close roadways connecting the interior of the park and re-route several intersections within the area. And the plan's removal of some surface parking spaces, residents argue, will make it more difficult for seniors and others with mobility issues to enter the park by driving straight in.

A crowd approaching 200 people attended a city public information session about the plan Monday, June 27 at the Guadalupe Cultural Arts Theater; then about 100 more attended a public hearing the next evening at Little Carver Civic Center. (Click here to replay videos from these meetings.)

Not one person at the meetings offered support for the plan.

NOWCastSA was there with cameras rolling, so you can replay the complete video from both meetings right here. NOWCastSA is a 501(c)(3) nonprofit organization, and work like this is funded by donations from viewers like you. Click here to give now!


The master plan originated from the mayor’s office in 2015. District Two City Councilmember Alan Warrick said the city paid about $250,000 to consultants for the development plan. The Brackenridge Park Conservancy is also is participating in the project.

However, as city officials emphasized in the meetings, the plan is not final, and there is presently no funding for the project, which could come before voters as a $150 million bonding proposal in 2017. (The park received $1.2 million from the City’s 2012-17 Bond Program for “development, improvement and rehabilitation of basic park infrastructure.”)

Landscape architect James W. Gray, who leads the firm Rialto Studio Principal and is the lead consultant for the project, was at the public information sessions to address concerns from residents.

“The master plan is a guiding principal plan for the park,” said Xavier Urrutia, director of the city's parks and recreation department. “But there is no funding for elements of the master plan at this time.”

The Brackenridge Park Master Plan avowedly seeks to reduce vehicular traffic, impervious cover and parking by replacing blacktop with green space. Many residents said they value the accessibility they would lose in that trade.

Local artist and activist Gene Elder said this recently in the San Antonio Express-News: “I drive and walk through the park regularly and observe the people who come to the picnic tables to spend an afternoon with a friend, have lunch, and let the kids and dog run around. They like the immediacy and spontaneity of coming right to the area and seeing if a table is available. Imagine what a hassle it would create if the convenient trip to Brackenridge were turned into an ordeal of having to go to a garage and take a tram just to sit in the park.”

Elder added that "the river keeps pushing the qi, or energy flow, down the waters to the mission. This has a revitalizing effect on the environment and on people.”

Elder attended the June 27 meeting, as did Micah Moore, another city resident who warned that "if you take away my access, you will open a can of whoop ass.”

Graciela Sanchez, director of the Esperanza Peace and Justice Center, shared a personal recollection from her history with the park.

But her family did use the park because there was no direct cost involved for picnics, so a family could spend the afternoon outdoors.

The sentiments that were expressed at the Guadalupe meeting carried over into the next evening for the public input session at the Little Carver Civic Center on June 28.

Homer Garcia, assistant director of the city’s parks and recreation department, moderated the discussion and reminded residents that "nothing is decided."

"These strategies are ideas. This is not an implementation plan.”

Megan Spencer, one of the leaders of Parkour SA, noted a change in dynamic the plan poses to her organization’s use of the park. The definition of parkour is the sport of traversing environmental obstacles by running, climbing, or leaping rapidly and efficiently.

"This would take away obstacles that we use for training every day,” Spencer said.

Alice Garcia also offered her own personal reflections of Brackenridge Park and the significance of the area.

“Brackenridge Park is personal to me. I spent my second birthday there in 1952,” Garcia said. “This can not be another gentrification process. Keep it San Antonio.” 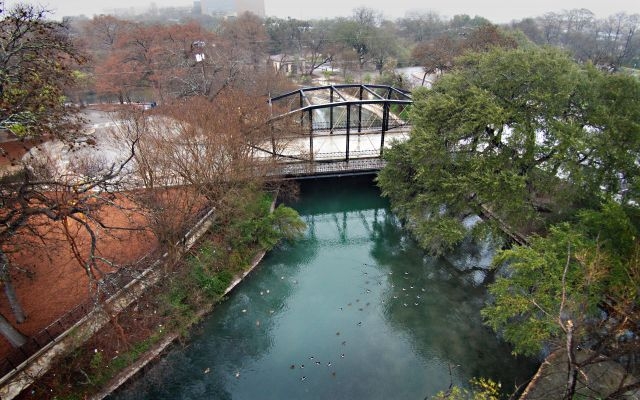