Complete video of the meeting is below:

COPS/Metro launched the Living Wage campaign to get it on the agenda ahead of the May 2015 campaign for San Antonio's mayor and city council.

A slideshow "On Living Wages" presented by COPS/Metro member Diane Duesterhoeft said the group wants the minimum wage for city employees raised to $14.91 per hour, the amount considered to be a living wage.

In other states, some suggest that a living wage may be closer to $22 per hour, when productivity gains are considered in addition to inflation.  In Texas, the minimum wage is $7.25 per hour.

Van de Putte said a living wage is important because, "when a salary of a minimum wage puts a family in poverty, there is no way that they can live a life of dignity." She vowed, " I will join you in your effort to raise [the] wage".

Later, Sister Gabriella Lohan, from the Sisters of the Holy Spirit and COPS/Metro Alliance, brought Elizando, Adkisson and Villarreal onto the stage one at a time, and asked each three questions:
1. Do you believe the county or city has a role to play in raising wages?
2. Do you support the COPS/Metro three-point strategy?
3. What steps would you take to begin to implement this strategy if elected?

Villarreal, Elizando, and Adkisson answered in support for all three of the questions.

Before asking the questions, Sister Gabriella said she and COPS/Metro believe "Bexar County should lead the way and set an example for other public entities and private sector employees that living wages makes good policy and good business sense", echoing Duesterhoeft's comments that COPS/Metro wants to work with the city to "lead the way in Texas for higher wages."

In an interview with NOWCastSA after the meeting, Villarreal said the current fight for a living wage in San Antonio applies to public employees only. If the minimum wage is increased, it would be "phased in at approximately $1 (per hour) a year... over a three-year period." He said  the minimum wage for city employees is about $11.50.

Days after the COPS/Metro meeting, Bexar County Commissioners asked the county manager to study the impact of raising the minimum wage for 400 county employees from $11.47 an hour to $13 per hour in the 2016 budget year. (See more at KBTX: http://www.kbtx.com/home/headlines/Bexar-County-to-Examine-Minimum-Wage-Increase-283209061.html ).

For more information on the Living Wage and Economic Justice Campaign in San Antonio can email copsandmetro@gmail.com or call (210) 222-2367. 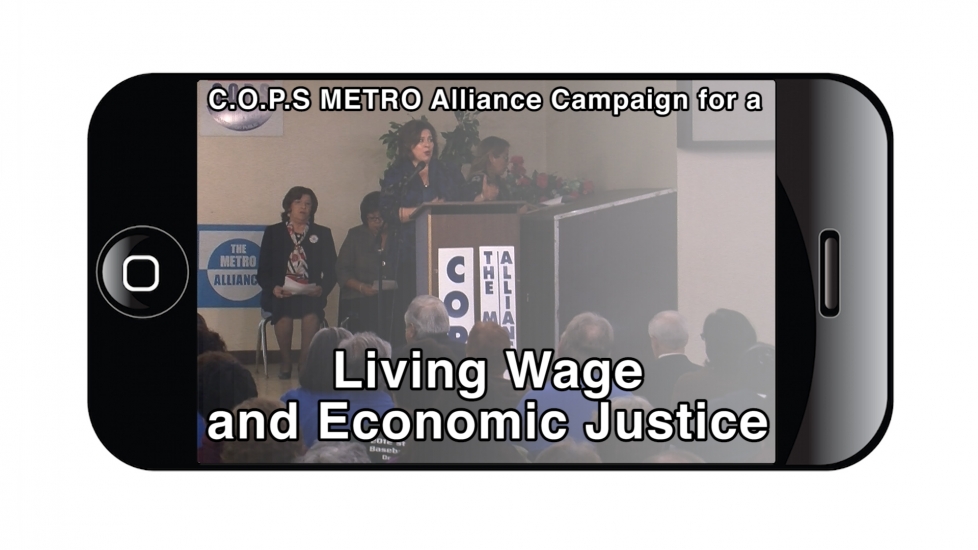