A NOWCastSA video documenting troubling asbestos removal in a residential neighborhood has prompted the Texas Department of State Health Services to open an investigation by an Asbestos Program inspector.

The video shows workers haphazardly scraping asbestos siding from a four-apartment building on Natalen Avenue in the Mahncke Park neighborhood just north of downtown San Antonio. The video, recorded early Sunday morning, Nov. 26, shows the shingles shattering in small dust clouds as they hit the ground around the apartment building and in the yard of a homeowner next door. (Watch the video here: https://youtu.be/KLOU_pddbc8 )

"What you saw in the video is one of the reasons the Mahncke Park Neighborhood Association Board has asked the city of San Antonio to place a moratorium on demolitions in our neighborhood," said Board President Joanie Brooks.  "We believe our neighborhood has been exposed to asbestos, not only in this instance, but in many of the other demolitions on Claremont and other parts of our neighborhood."

“We were very concerned to hear about the asbestos on Natalen, and my office acted immediately to alert Development Services and Code Compliance of the safety concerns upon learning of this. The safety of our residents is always my number one priority and I expect that city staff will continue working diligently to ensure all regulations are followed."

After visiting the site on Nov. 28, San Antonio Development Services Department Code Enforcement officers said the property owner appeared to be complying with city regulations. “We’ve checked this property and there is a demolition permit as well as a licensed asbestos remediator," Development Services Manager Martin L. Ruiz wrote in an email to DSD Director Mike Shannon and Councilman Shaw's office.

"The media has asked us two questions; who is responsible for the cleanup and who is responsible for the safety of the residents," his email continued. "The answers are the licensed contractors are responsible for the cleanup and as far as ensuring the public safety, it’s the State; namely the Texas Department of State Health Services (TDSHS).  As an item of interest, the shingles are considered non-friable, meaning that they are not reduced to powder easily.  As far as COSA is concerned, the property is compliant.  TDSHS however assigned an investigator to check into the complaint on their end."

The Texas DSHS investigator will determine whether the property owner, Imagine Homes, broke the rules by not notifying the state agency about the demolition, not conducting an asbestos inspection of the property and by not monitoring the air at the site. (Click here for details on what structures are covered by DSHS.) 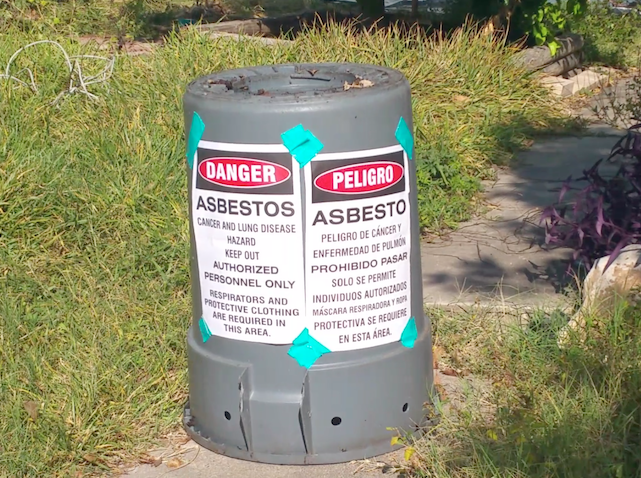