Watch video of former mayor Phil Hardberger talking about his namesake park, its history and plans for the future.  Scroll down to read more about the park.

The land Hardeberger Park is on was previously owned by Max and Minnie Voelcker: The 311-acre landscape was home to a working dairy farm for decades. Max and Minnie lived on this German farmstead until their deaths in 1980 and 2000, respectively.

Mayor Phil Hardberger urged the city to purchase part of the Voelcker plot to save a large portion of historically important land and century-old trees. In 2007, a majority of San Antonians voted for a bond issue to purchase the land and dedicate it as a parkland for future generations. The acquisition and development of the property is the signature project among the 69 park projects included in the 2007-2012 Bond Program, the largest municipal bond program in San Antonio history.

The park contains stunning landscape, with some of its trees, the Voelcker homestead, dairy barn and old Texas stone house - all dating back to the time of the Alamo - preserved within its boundaries. The dairy barn was restored in October of 2012 and the Phil Hardberger Park Conservancy plans to restore the stone house in 2014.

Today the park is about 60 percent complete with hiking trails, safety-enhanced playgrounds, two dog parks, conservation practices and educational programs where you can learn about flowers, trees, conservation or the wildlife in the area.

The park is known for its open space and investment in the preservation of the landscape and heritage but it is surrounded by subdivisions, shopping centers and is currently separated into two parts by the Wurzbach Parkway.

Connecting the east and west sides of the park would create a cohesive natural area and help protect the wildlife living in the park. According to the park's Master Plan, the ideal way to connect the two sides is to build a bridge broad enough for animals and people to safely cross.

This Land Bridge would be 100 yards wide and could cost as much as $20 million to build. Other land bridges, like the one proposed, can be found around the world in Belgium, Netherlands, Germany, and Cananda. A bit closer to home, Montana, Washington and New Jersey have built Land Bridges.  Other, less costly options, include tunneling under the parkway or building a much smaller footbridge that would accomodate people but not animals.

The Conservancy is actively seeking funding for this important and ambitious project, and is participating in The Big Give S.A. on May 6 (see video below).

"Lots of things here to learn, but if you just want to get out and have a good time, its also a great place. Come here and have a picnic. You can come here and play basketball. We have outdoor basketball courts. It's for the whole city. It's not for any particular area. In an urban environment we learn to shield a lot of that out and in doing that we lose so much of the enjoyment of life." - Phil Hardberger 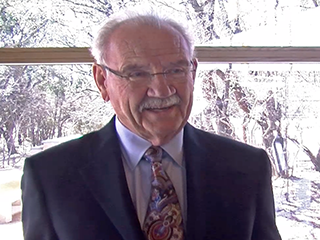