The anti-vaccination movement is gaining strength in Texas, apparently.

At least, that's a concern of Dr. Julie Boom, one of the state's leading vaccers, the director of Texas Children's Hospital's immunization project. Boom recently spoke at a conference in San Antonio, imploring health workers to recommend scheduled vaccinations as strongly as possible.

"It is actually ethical to persuade," Boom said at the Immunize San Antonio conference in October. Because the benefits of vaccination, in general, for any vaccine, including HPV, so far outweigh any risks, it is ethical to be very persuasive."

The trend lines in Texas aren't the best, Boom said. Texas is below the national average in vaccination rates, Texans have more ways to opt out of vaccinations than do residents of other states, and an anti-vax movie called "Vaxxed," was said to be circling back into San Antonio. In addition, Bexar County District Attorney Nico LaHood recently said, "Vaccines can and do cause autism."

Watch a video of Dr. Boom's presentation from a recent Immunization Conference below:

And did you hear about Andrew Wakefield, who triggered panic with his published study supposedly showing a link between vaccination and autism? It's well known that he cut so many corners that Lancet, the journal that published his study, later retracted it entirely. Now, Wakefield can't practice in Great Britain. So, he has set up shop just outside of Austin.

But many parents remain hesitant about the vaccine, particularly the HPV-9 vaccine that came out nine years ago. The percentage of Texas teen-aged girls with at least one HPV vaccine is 60.1, compared with 62.8 across the country. But it's even lower in Bexar County, 56.2. Among teen-aged boys, the percentages are 49.8 nationally, 41.4 in Texas and 40.3 percent in Bexar County.

"This is just simply unacceptable," Boom said about those numbers from the Centers for Disease Control. "These diseases, whether cervical cancer or head and neck cancer, are killing individuals. HPV is causing death for, not children, but older adults."

Because the HPV-9 vaccine inoculates against a number of conditions that are transmitted sexually, many parents refuse it. Some of those parents say it isn't necessary to inoculate because they are teaching abstinence. Others fear that the inoculation would make their children sexually active.

But the anti-vaccination population in America aren't just social conservatives teaching their children abstinence. Some of the lowest vaccination rates in the country are in places like Beverly Hills, Santa Monica Marina Del Rey and Malibu. In a 2014 piece for the Wall Street Journal, Dr. Paul Offit said those immunization rates are common for places like Chad or South Sudan. 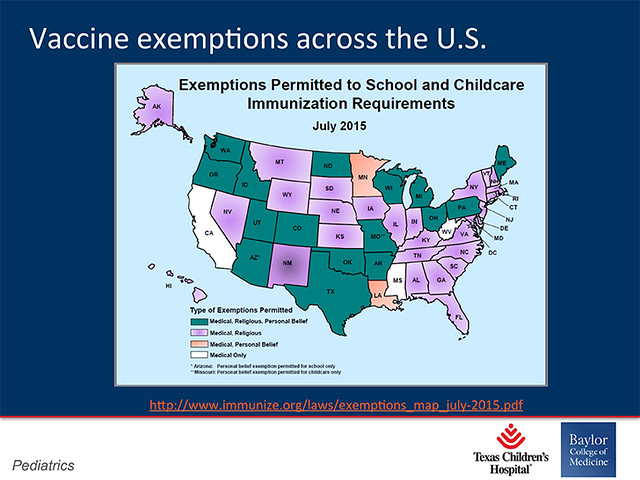 The prospects for such legislation in Texas, obviously, are bleak. From 2003 to 2016, the number of Texans with non-medical exemptions has increased from fewer than 5,000 to more than 45,000.

Texans have not only access to religious exemption from vaccination, but also a "philosophical" exemption, just in case someone has an objection that isn't specifically religious.

Boom advocates that physicians be as persuasive and insistent as possible to get children vaccinated. Use presumptive language. Be confident in your recommendation, but target it to the concerns raised by hesitant parents. Don't let them wear you down.

"These parents need to hear from you because, I'm telling you, the Internet is also very powerful, in the privacy of their bedrooms," Boom said."So, make sure your voice is known."

If all else fails and the parents refuse to vaccinate, the trust between the physician and the parents may dwindle to the point at which it is appropriate for the physician to dismiss the client, Boom said. And, also, make sure to fill out the American Academy of Pediatrics Refusal to Vaccinate form.

"If a parent, on multiple episodes is continuing to refuse HPV," Boom said, "they are really opening their child up for risk and they need to document that they are refusing it and they are taking on that risk, not you." 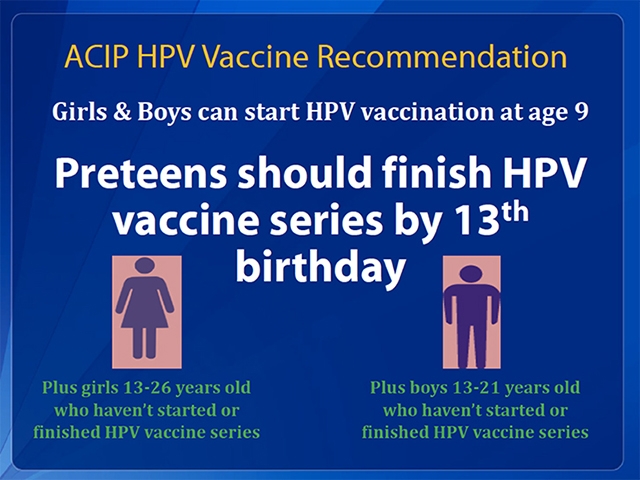