The Student Nonviolent Coordinating Committee (SNCC) came to San Antonio in 1968, when a young, African-American male, Bobby Joe Phillips, was killed by a police officer and the officer was not prosecuted.

“We do have a history of this issue,” Abram Emerson, SNCC Legacy Organizer, said at SNCC's “Know Your Rights” workshop at Antioch Baptist Church on Jan. 14.

The issue, of course, is relations between police and African-American citizens. One way for African-Americans to receive justice, according to workshop speakers, is to simply know and exercise your rights. Speakers at the workshop encouraged attendees to to understand the legal process and use it. That is essentially the definition of having rights.

Watch the first part of the workshop in NOWCast's video below.

Among the speakers were SNCC veterans Mario Salas and Claudius Minor, along with several civil liberties attorneys.

One attorney noted that you are going to jail “nine times out of ten” if the officer has asked you out of your car. So, don't be too hopeful that you can talk your way out of it and go home. Police get paid to arrest people. Don't answer questions, and don't consent to a search. Think long-term about the process and winning in the end.

Anything one says to the police can be used against him. Thus, silence with the police is advantageous to his legal defense.

Do not consent to a search without a search warrant. The standard for a Class B marijuana misdemeanor in Texas is any usable amount. That means you've got trouble if the officer can cuff enough in his fingernails.

“The difference between the police department now and (during the 1960s), in one main effect, is militarization,” Minor said. “Until you prove otherwise, you're ISIS to them. ... You are the enemy. You have rights. On that point, if you don't know your rights, you sure don't have any. You must know what you can and can't do, and what other people can do and can't do.”

Also, act as if you are on camera, and what the jury will see of you is on video, rather than police accounts. And pray there is video. Which means that if you see something happening, take video. Utilities like Facebook Live and the American Civil Liberties Union's Mobile Justice, will get the video out even if the officer takes you phone and tries to erase your video.

Along with the legal process, public and political pressure can be brought to bear on justice in specific situations.

View the second part of the workshop in NOWCast's video below.

For example, there was a recent matter of two young women being arrested at a fast food restaurant. Police officers charged the young women with obstructing police activity because they didn't move fast enough.

But the charges were dropped after back-channel pressure on the Bexar County Sheriff and the District Attorney came from sympathetic political leaders. One attorney mentioned that Attorney General Nico LaHood noted a heavy volume of community pressure.

In addition to talking with LaHood, Bexar County Commissioner Tommy Calvert also discussed the matter with the sheriff.

“It was a very tough conversation that I had with (the sheriff) about how dissatisfied I was and what a waste of time it was to send these two young ladies who were on their way to a bright and prosperous future to a criminal record,” he said.

There also are rights involved in family law. If, for example, one party in a relationship has a protective order another, but now the two are getting along fine, there still is a protective order in place. Maybe an attorney can get a two-year protective order reduced to one year, but none of that happens until a legal process has played out.

So, don't automatically assume the law will be on your side if your getting back together.

“You will be in jail for violating the protective order, and there's not much you can say to defend that,” said an attorney. 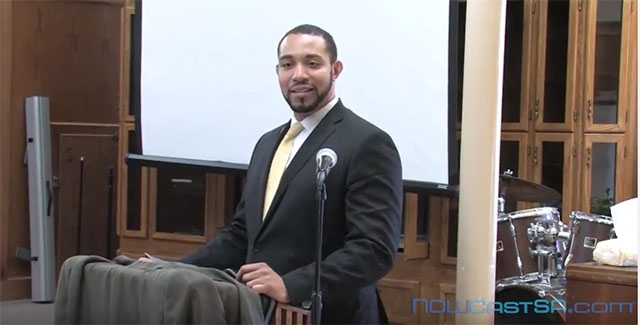