The strategy session was organized after an outcry from Latino voters concerned about incoming President Donald Trump’s proposed policies and offensive language towards Latinos during his presidential campaign.

“The truth is that election day came, the next day we got hundreds of calls from people,” said Lydia Camarillo Vice President of SVREP. “‘What are we going to do now? What do we do next? What’s going to happen to the DREAMers?’ So we were asked to put this meeting together.”

VIDEO: Watch a video from the strategy session below.

Dr. Jill Stein, Green Party presidential candidate spoke on the presidential recount efforts and election reform on the final day of the session.

Southwest Voter Registration Education Project originated in 1974, is present in 14 states and encourages Latinos and other minorities to participate in our democratic process.

VIDEO: Watch a video from the strategy session below.

Protecting the Latino vote is a primary concern with voter ID laws and redistricting discussed as barriers Latino voters face.

Traditionally the Texas Constitution requires lawmakers to redraw district maps every ten years upon the U.S Census release, according to the Texas Secretary of State website.

Redistricting is the process of redrawing boundaries to maintain a proper representation of population. In 2003 Gov. Perry called for a mid-decade redistricting leaving some voters wondering about the need to redistrict twice in ten years.

In 2004 Texas Republicans gained the majority of the House seats.

“Every decade since Latinos were protected under the Voting Rights Act we’ve brought a case against the redistrict of Texas, redistricting maps and so that’s something we are going to continue to fight and struggle for as long as we continue to have the same folks in office,” says Celina Moreno, legislative attorney for the Mexican American Legal Defense and Education Fund (MALDEF).

In 2011 Texas put forth one of the most strict voter ID laws in the United States. The state required voters to present valid photo identification like a driver’s license or passport. Some voters feel the law is discriminatory.

In July 2016 the U.S. 5th Circuit Court of Appeals ruled the voter ID law not in compliance with the Voting Right Act. The 2011 voter ID law was not enforced for the presidential election.

The State of Texas has spent more than $3.5 million defending the voter ID law in five separate lawsuits the Texas Tribune reported in a June 2016 article.

“We see the political barriers that are put in front of us as well, voter ID, the disingenuous drawing of maps-redistricting maps that still is in the court system,” says Dr.Rogelio Saenz, Dean of University of Texas San Antonio (UTSA) College of Public Policy (COPP).

“There have been the indirect barriers that have been put in our way, the slashing of public education here in Texas that in 2011 the state legislature cut $5.4 billion at the time when Latino children became the largest students in the state and we haven’t recovered from there.”

“So how does the Texas court turn away poor people challenging a substantially unfair system? By changing the law and the facts to ensure they can’t win, of course-just as their federal counterparts did 43 years ago (Rodriguez v. San Antonio),” writes David Hinojosa in his article In school finance decision, the poor people have lost again.

Hinojosa is the Director of Equity Assistance Center (EAC) Intercultural Development Research Center (IDRA). The IDRA is four decades old and was created to protect students’ civil rights in schools.

Twenty four percent of Latino eligible voters do not have a high school diploma in Texas, according to PEW Research Center.

Educating Latino voters on political parties, candidates and policies is a priority with the current statistics and barriers.

Only about 18 percent of Latinos aged 25 or more in Texas had an associate’s degree or higher in 2014, according to the 2016 Texas Demographics and Higher Education report by the Texas Association of State Senior College and University Business Officers (TASSCUBO).

Some Latino voters are apprehensive at the possibility of undocumented immigrant mass deportations after the rhetoric president-elect used throughout his presidential campaign.

One of the largest Latino civil rights protectors MALDEF ensures that Latinos are being put forward in American political and socio-economic processes.

In 2012 President Obama signed an executive order Deferred Action for Childhood Arrivals (D.A.C.A.) which aids undocumented child immigrants from being deported if they meet certain requirements.

The Development, Relief, and Education for Alien Minors (D.R.E.A.M) Act is legislation that strongly focuses on creating a course for undocumented childhood immigrants to gain citizenship with certain requirements.

The DREAM Act on a federal level has been stalled since its introduction in 2001, it was denied again in  2010.

Texas has its own DREAM Act passed in 2001 it was one of the originating deferred action plans in the nation. The bill HB 1403 gives undocumented immigrant students who qualify the rate of in-state tuition rates and grant eligibility.

As of 2013 nearly 25,000 non-citizen resident students (DREAMers) in Texas have benefitted from HB 1403, according to Center for Public Policy Priorities.

“If we are divided we are conquered,” says Dr. Jill Stein 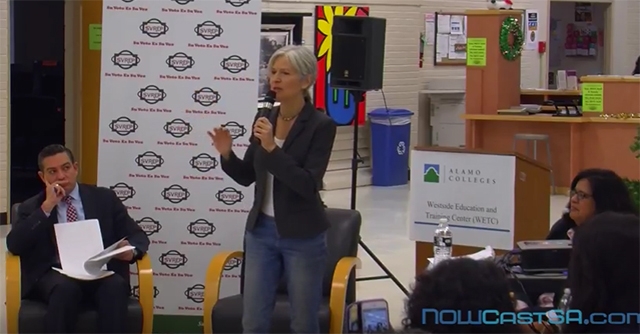