Just weeks into his new job as Mayor of San Antonio, Ron Nirenberg spoke candidly about his priorities for the city, with an emphasis on equity for  at a town hall conversation at the University of Texas at San Antonio, July 27, 2017.

The event was co-sponsored by UTSA and the San Antonio Express-News and moderated by Francine Romero, Associate Dean of the University of Texas at San Antonio College of Public Policy.

Watch NOWCastSA video of the full event here or scroll down to read more about the discussion:

Nirenberg talked about equity during the campaign, then he followed through days after taking office by creating a new city council committee on Community Health and Equity to oversee policies plans and programs that affect residents’ quality of life. When he created it, Nirenberg directed the committee’s responsibilities to include “the protection and enhancement of the natural environment, public health, education and the development of equitable social services.”

At the Town Hall, Nirenberg elaborated on the role  the new committee will play in policy from budgeting to the SA Tomorrow plan for future growth.

He said he wants to change the historic city budgeting pattern of the ten council districts getting roughly equal dollars to spend on resources. That’s because some areas have been neglected, or need more repair to improve things, such as road conditions.

Nirenberg said the new Community Health and Equity committee will identify areas that need more resources to bring neighborhoods up to proportionate repair. For example, if one area has recently had roads and sidewalks repaired but another district’s roads are in disrepair, he said more resources would be sent to that district, bringing road conditions across the city to equal driveability. The goal, he said, is to have comparable conditions of public infrastructure across town. 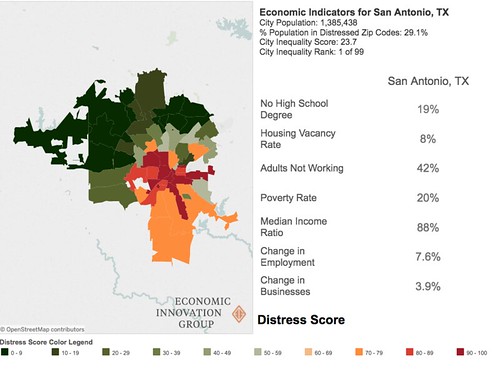 disparity in America using its Distressed Community Index, which looks at factors such as residents with no high school degree, housing vacancy, poverty, number of adults not working, change in employment and change in business establishments. [Click here to go to EIG to learn more.]

She read a question from a community member that asked, “What plans do you have to change quality of life for people in the income segregated neighborhoods and will you have full support on that from the full council?”

Nirenberg said the city council needs to be “acknowledging history’s mistakes and acknowledging that there are members in our community that are often at the short end of the public investment stick. We are going to do something about it and I think it starts with using equity as a guide to reestablishing our budget priorities.”

He again pointed to the Community Health and Equity committee, and said gauging community health is an excellent indicator of equity.

He added that the SA Tomorrow plan is to accommodate growth that we know is going to occur in our city and “make sure that it benefits every part of our city, and that we restore equity.”

Nirenberg  added that the implementation of the plan cannot just become an administrative function of the city, that the council should continue to watch how the plan is applied and make adjustments as needed.

“And that's why I am glad we now have a (Comprehensive Plan) Committee tasked with watching that,” said Nirenberg. “The committee is chaired by Councilwoman (Shirley) Gonzales, who has been talking about this for years. She represents what is one of the most impoverished areas of our city, historically, which is the West side.”

Asked what he intends to do to reduce crime in San Antonio, Nirenberg said it will be a challenge, not just in finding out what the cause is, but also in finding solutions. “There are many areas of town that correlate high poverty, high crime, lack of infrastructure, and basic services, which is one of the reasons one of the approaches to fighting crime is to enhance equity investment,” he said.

“This is also important from a school standpoint because another correlation with crime that we have seen is low educational attainment. We can do a better job with our public school systems and support public schools, not by getting directly involved, but by ensuring that our investments in our community, the things that the city does, services to infrastructure are aligned with the priorities of the school districts and to reinvest and bring up poor performing schools that are invariably in difficult neighborhoods.”

Nirenberg added that from a crime-fighting standpoint, the San Antonio Police Department is working on rebuilding relationships through community policing. He said he has been riding along with police to learn first-hand about crime-fighting issues and got to see, first-hand, an new approach implemented by Police Chief William McManus. Historically police would patrol high crime areas, but now there are special units who go out and speak to the community members to get to know the people who live around these crime centers.

“We have to restore community policing relationships wherever we can,” said Nirenberg. “Obviously we are not going to arrest them if they are doing no crime, but we are there to get to know them and have contact with them to be present and address issues before they arise.”

He added that community policing, including programs like neighborhood crime prevention and the SAFE Officer Program, need to be supported by the budget. The budget, he said, was the final key element in crime fighting.

“We have a structurally unbalanced budget within public safety,” he said, “meaning that the revenues of the city are growing slower than the expenses in public safety and that is a big challenge. If we don’t have resources growing, if we don’t have proactive policing resources, and personnel in the city department - as the city grows we are going to find ourselves further and further behind the opportunities to prevent crime.”

He stressed the importance of negotiating contracts so that there can be enough resources to keep the public safe.

In response to a question about the future of transportation in San Antonio, Nirenberg said: “The truth of the matter is we are going to bring in another million and a half people (by 2040). They will be born here or they will move here in the next 30 years - we will be the size of the city of  Chicago.”

He said if nothing is done to change the way the city handles transportation, then in the next 20 years the average commute time will go up 75 percent and 500,000 cars will be added to San Antonio’s roads.

“Those bottlenecks that you sit at, the ones that really drive you nuts,” he said, “your wait time will be up 900 percent and that's if we just do what we are doing now, which is building roads and just kind of implement the the current system that we have today. I tell people we cannot afford to not do modern transportation right.”

Nirenberg said that the city is working on a transportation plan that is citizen-directed and that no plan will be put in place that is not voted on. He said the city is in dire need of mass transit and our children and grandchildren will be sorry if nothing is done now.

“We need to do this… that is why I want to get the youth vote out, because those are the ones who are going to have to live with the consequences of our transportation choices the longest,” he said.

Nirenberg added that the city, and the citizens have already made some good choices about the future of transportation in the discussions about bringing a light rail system to San Antonio, and improvements on safe bike lanes and safe pedestrian paths. “We are doing elements of a multimodal system correctly,” he said. “We just have to now take the big leap, which is to get a mass transit system in San Antonio.”

When asked how a mass transit system would be funded, Nirenberg replied that no city can do such a big venture without federal funding support.

“My hope is that the current federal administration will know that transportation is important and will continue to keep the programs funded that are currently there,” he said.  “Which, when local communities are ready to invest, (the federal government) provides up to half of the capital.”

Nirenberg said the fate of any major transportation change rests upon the voters and although he does not yet have all the answers to a comprehensive plan, he is working on it. 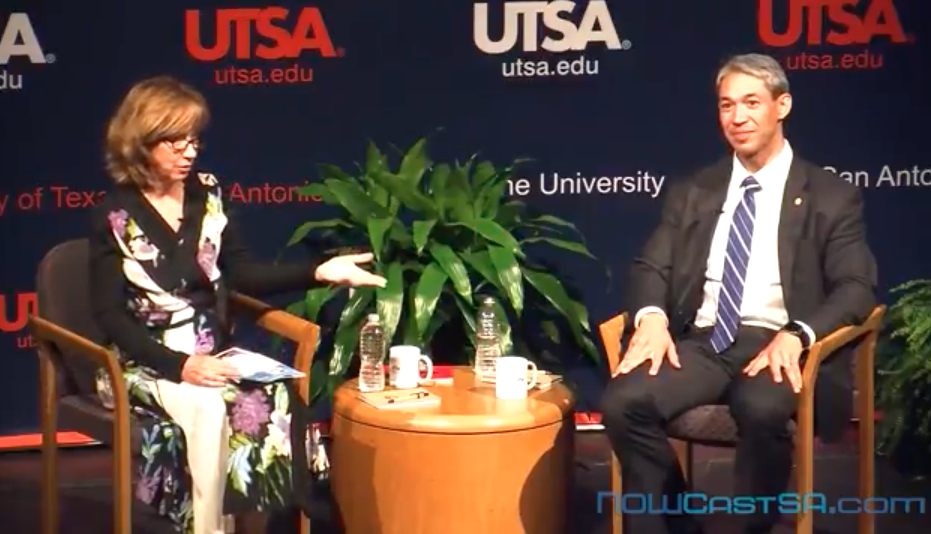