After 33 years, The Paisano has moved into a new “lite-green” home especially designed for the University of Texas San Antonio student newspaper. Undergraduate and graduate students from the College of Architecture guided the design for The Paisano Media Arts Center, now located at 14526 Roadrunner Way, Suite 101, about two blocks south of UTSA's main campus.

The newspaper was established as a 501(c)(3) nonprofit in 1981. It is owned and published by the Paisano Educational Trust (PET) and "funded independent of the university through advertising sales and donations."

You can watch some of the interviews from the grand opening in this video.

Red McCombs, already the The Paisano's largest donor, made an impromptu offer at the the center’s grand opening offering to match any donations to the news organization, up to $20,000, through Sept. 27, 2014. McCombs said he was following his favorite preacher's advice: "Don't ever draw a crowd without passing the plate."

Rick Lewis, Intern Development Program (IDP) Coordinator and Senior Lecturer at UTSA's College of Architecture, explained  the "green" design of the new building: "It's green on the lighter side. There's no high-tech technology you usually associate, like solar panels or rain collection, going on at this time. Our greatest of intentions and goals was to do some solar panels... which we could not afford to do, but they could be eventually added. And then we wanted to collect water, but being over the recharge zone, there were even challenges in that."

What The Paisano's new building does have, Lewis continued, are "thicker walls than are typical for a commercial building like this, that means more insulation, doubled-glazed windows and door systems which are better than most inexpensive buildings, and sun-screening to shade walls from the heat."

"One of the biggest assets is that it's a small footprint building. It's tight. It's not a lot of wasted space. It's very specific to the functions," said Lewis. "So, we've incorporated a lot of logic to this building in the absence of a budget that would have let us do high tech. But we built the building in such a way that we could augment it at some point."

Lewis also said the building's green design could serve as an example for future buildings, including residential homes. 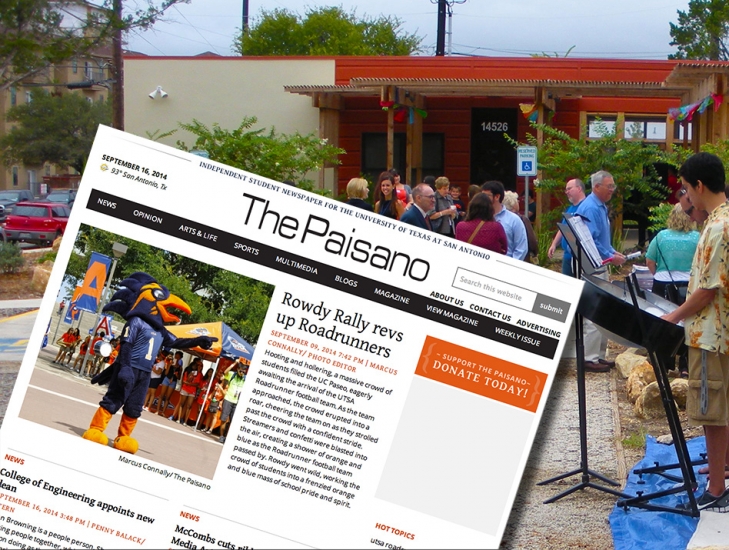