A local state legislator and San Antonio’s top cop feel the federal and state push to step up enforcement of immigration laws, locally, could do more harm than good.

But a conservative think tank official and Bexar County’s GOP chairman say the federal and state governments are only wanting cooperation from police in local immigration enforcement to improve community safety.

Those were the widely varying opinions offered at a town hall on immigration and sanctuary cities on Jan. 26 at the University of Texas at San Antonio Downtown campus.

See the entire video filmed by NOWCastSA below.

Some of the statements offered by the four panelists sparked cheers and jeers from the capacity crowd. Immigration has been in the news this week, the first full week of President Trump’s administration.

Trump also pledged to direct federal funds to build his ballyhooed wall along the Mexican/U.S. border. Additionally, he threatened to withhold federal funds from cities proclaiming themselves as sanctuary cities.

Travis County Sheriff Sally Hernandez announced recently she would not turn over some unauthorized immigrants in her jail to federal immigration officials, putting her at odds with Abbott. Dallas County Sheriff Lupe Valdez did something similar in 2016. The city of San Antonio released a statement Jan. 26, saying it was not an official sanctuary city.

However, Bexar County Republican Chairman Robert Stovall and Jeff Judson, from the Heartland Institute, a conservative think tank, said it’s not enough for a city to just proclaim itself as a non-sanctuary city.

Stovall and Judson said they agreed with Trump and Abbott in that local law enforcement agencies should be encouraged to seek the immigration status of individuals they detain.

However, Republican state lawmakers have proposed a bill - Senate Bill 4, for this current legislative session. If adopted, it would demand local law enforcement officers to immediately ask an arrested person for his/her immigration status.

Stovall said he has seen data that shows a surge in San Antonio’s crime rate include violent crimes committed by some undocumented immigrants.

“There isn’t a problem, but there’s a potential,” Stovall said, pointing mainly to actions taken by the Travis and Dallas county sheriffs. “If we say we’re not something, but if we act like it, that’s a problem.”

Judson took pains to dismiss the perception that governments are focusing on going after undocumented immigrants, or that legal residents are encouraged to report such individuals they deem suspicious.

“It isn’t about catching people who are here undocumented. It’s about getting known criminals off the streets, and keeping them off the streets,” Judson said. He added that a sanctuary city policy, backed up by police, “undermines our safety.”

View a photo gallery of the town hall below. 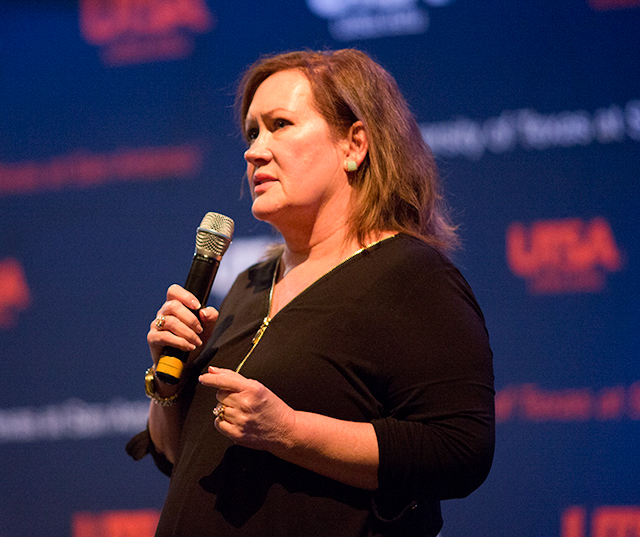 Diego Bernal, Democratic state representative from District 123, said he does not see any problems of local undocumented immigrants committing crimes.

“All residents, whether they’re undocumented, get along really well,” he added.

Police Chief William McManus said his department is to enforce mainly local laws, not those pertaining to federal immigration.

McManus repeatedly pressed his case that police already do what they are charged to do: Arrest a person caught committing a crime, regardless of race or gender.

He also said police have enough on their plate as it is without being required, by a state or federal government, to essentially reinforce federal immigration laws regarding undocumented suspects, detainees, or those with a warrant.

"I don’t think (local police) should enforce federal regulations. We have enough to do as it is,” he added.

Judson said “warrant” is a key word in this discussion, adding that when Immigration and Customs Enforcement (ICE) seeks a detainer, they ask the holding jail to keep that person for 48 hours while a background check takes place.

Judson and Stovall described the proposed Texas Senate Bill 4 as well-written and a reflection of how serious the state government takes concerns about border security, and safety in regards to undocumented immigrants.

Stovall went one step further, saying it seems unfortunate that, if SB 4 were to go through, the state would have to find itself demanding local police departments to merely ask for a detainee’s immigration status.

McManus and Bernal called the proposed bill flawed, with the police chief saying it could “usurp” his ability to run his department.

McManus added the bill, if it becomes law, could ruin fragile relationships local police has built with certain racial communities that already are suspicious of law enforcement.

"The problem with asking for someone’s papers or immigration status is, do you ask based on the color of their skin?” McManus asked, prompting some applause and shouts from the audience.

Bernal, an attorney by trade, said SB 4, coupled with Trump’s executive orders, may bring the country even closer to a compulsory system with mandates on local law enforcement. If that comes to pass, Bernal suggested it would be a “dark period for this city.”

Stovall said having such a requirement may actually free up local law enforcement officers who try to check people’s immigration status against criminal backgrounds. This way, he added, such investigations could be streamlined.

SB 4 has also compounded a wider debate about local vs. state control in Texas.

Many Texas cities and counties are already worried the state legislature may, this year, impose a cap on local property tax revenue, as mostly Republican state lawmakers seek to ease the burden on taxpayers.

Bernal was blunt in his assessment: “A certain party was pro-local control until the locals started doing things they didn’t like, so now they’re anti-local control.”

Bernal also took issue with politicians who “think they know better about policing than the police.”

Judson said he backs the notion of local control. But in the cases of Travis and Dallas counties, for example, higher levels of government are obligated to “step in” to help ensure laws are reinforced so that communities are safe.

View a photo gallery of audience members protesting during and after the town hall below. 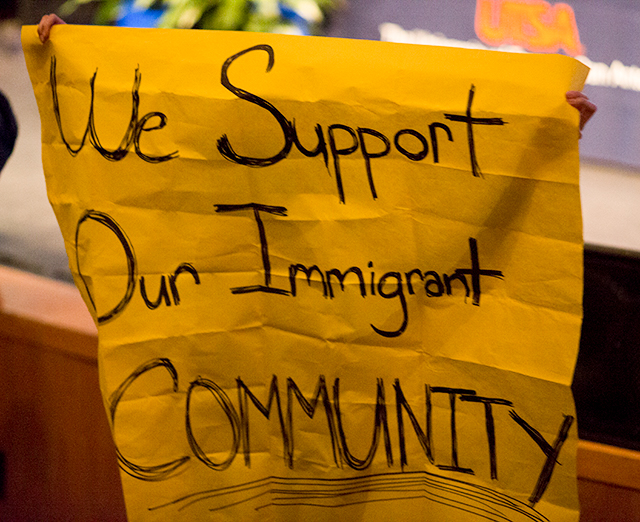 "What’s wrong with cooperation?” Stovall asked. He suggested local police departments could use these pressures from the state and federal governments as leverage in the effort to gain more financial aid in fighting crime.

Bernal remained skeptical of the mandates from Austin and Washington, D.C. He expressed concern that the pushback against sanctuary cities and open immigration policies distract lawmakers from addressing larger issues, such as health care, education and transportation.

“They prey on the vulnerable and make us afraid of them,” he added.

As the town hall ended, a handful of audience members turned protesters with large signs. They spilled out into the hallway of the UTSA Buena Vista Building, saying immigrants deserve respect and protection.

**Cover Image: Protesters in support of immigrants hold up signs during the Sanctuary Cities town hall Thursday, Jan. 26 at the UTSA Downtown Campus. Photo by B. Kay Richter. 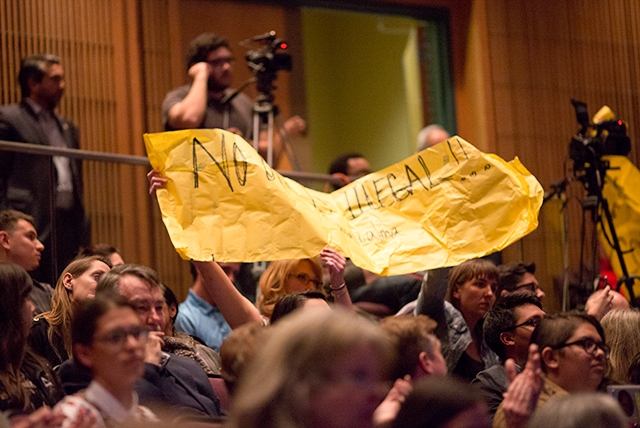