Video: Poetry links activism from the 1960s to the present

Black Lives Matter is more than just a buzzword for the decade. It has been the focus for African-American activists for more than 50 years.

The Student Nonviolent Coordinating Committee (SNCC), formed in the 1960s, was one of the most important organizations of the local Civil Rights Movement. On Friday, Nov. 18, leaders of SNCC and the Black Power Party held a poetry reading at the Little Carver Theater.

Abram Emerson, a poet and member of the SNCC Legacy Project, said that his organization led to the founding of the Black Power Party. Although the battle is not over, creative expression can help attain justice.

“We want to chronicle the experience so we can reach out to the younger generation,” Emerson said. “Through poetry, we can find a connection.”

Mario Salas, Minister of Information for SNCC and professor of political science at UTSA, recalled organizing Black Student Unions at most of the college campuses around town during the 1960s.

“We grew up in a time when it wasn’t safe to march,” he said. “I am so glad to hear people carrying on this legacy.”

Both Salas and Emerson recalled a young black man who died during an arrest by San Antonio police in May of 1968 – about a month after the assassination of Dr. Martin Luther King Jr. – and lamented how things have not changed much.

Watch a video from the poetry session below.

“Bobby Joe Phillips was beaten to death,” Salas said. “A thousand people went out in the streets to protest his killing. This struggle has been going on for thousands of years.”

The need for awareness and activism does not end. Keeping the fire alive was one of the purposes of the poetry reading.

“We want to pass on this legacy,” Salas said.

“For us, it started with the killing of Bobby Joe Phillips,” Battle said. “It’s always been about Black Lives Matter.”

Mondrea Harmon, the Urban Griot, served as the master of ceremonies for the first half of the event. He wowed the crowd with his recitation of the journey Africans took across the Atlantic Ocean, “Trips on Ships with no Sheets.”

But the audience approval was nothing compared to the reception given his daughter. Six-year-old Ras Amicah Harmon recited a lengthy biography of Ella Jo Baker, a hero of the Civil Rights Movement.

Poet Phyllis Lane reflected on Langston Hughes who lived from 1906 to 1967. “He is not dead,” Lane said. She then recited two of his poems, “I too Sing America” and “The Negro Speaks of Rivers,” from memory.

Joyner sang the refrain, “He protected me when I was young / and carries me / as I grow old. / The sweet wonder and lover of my soul.”

“To the Lost Boys” was a powerful composition performed by Fernando Rover. (This is) “For the boys who never grow up,” he said, “they just die.”

Local attorney Nakita Reddic-McClure gave notice to the audience of an impending seminar dealing with police encounters in minority communities. “’How to Exercise Your Rights when you’re Stopped’ is a workshop coming up,” she said.

Jonathan David Jones is an organizer for Black Lives Matter and serves on the Mayor's council on police-community relations.

“We’re not anti-cop, we’re pro-freedom,” Jones said. “Antronie Scott was killed in February 2016. But a lot of people don’t even know his name.”

Jones then launched into a poem conveyed from a slave’s voice.

Andrea ‘Vocab’ Sanderson, a well-known writer, poet, and performance artist around San Antonio, was the master of ceremonies for the second half of the poetry event.

“I’ve been a jazz song” was the substance of her poem. “Music is my everything,” she sang.

Brittini Ward, from Detroit, said she mentors students. Her poem, entitled “Black Privilege,” was heavy on the irony.

Siarra Freeman, from Cleveland, said it is important to “Be there for your friends.” Her poem, “Urban Girl,” brought the audience to its feet.

“Identity,” performed by Martita Carley, contained these lyrics: “I know who I am / We know who we are / Others confused by the color of our skin.”

The evening’s poetry resonated with the images of the black community. Michael Lawson’s poem bemoaned, “I’m tired of hearing gunshots.”

Jamaal Alejandro Haffner is the host of the PWA and Blah Blah Blah poetry venues. “Hello, I’m Joe,” he began his poem. “I’m Black. / So I’m offensive. / But I’m a human being.”

Brittney, Sister Barbara, and Baba Undar will do a musical of Malcom X in February. They also contributed to a film, “Message to the People.” Their spoken-word recitation of “Do you Remember?” mesmerized the audience.

Lady E. had a poem about anger and the black woman, what she calls the Mandingo Effect. “I am more than just another angry black woman,” she said.

The SNCC Legacy Project will offer other events and workshops for the community. Their goal is to organize projects and programs that seek to educate the nation. Learn more about SNCC at http://www.sncclegacyproject.org/. 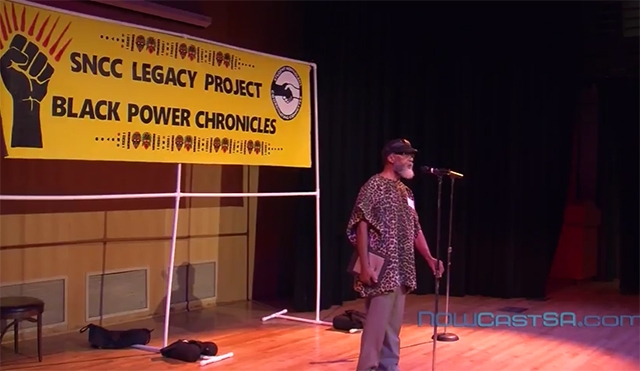