The San Antonio Police Chief, the Bexar County Sheriff and District Attorney condemned the bill banning sanctuary policies, and were joined by C.O.P.S./Metro leaders who said they “refuse to give up a culture of hospitality and welcoming the stranger.”

Also known as Senate Bill 4, the measure signed by Gov. Greg Abbott on May 7 would penalize communities and law enforcement officers who don’t honor requests from immigration authorities to hold undocumented inmates for deportation. Another provision, dubbed the “show-us-your-papers” clause by critics, would allow police to ask about a person’s status when they are detained but not under arrest.

“In my view, this is institutionalized racial profiling and is un-American” said Bexar County Judge Nelson Wolff, who led the May 5 news conference on the steps of the Bexar County courthouse.

San Antonio Police Chief William McManus was blunt: “Let me be clear. SB4 is bad for public safety. it will not help make our streets safer,” he said. “It is also a racial profiling bill.”

McManus warned that police can’t do their job without help from the community.

“Our primary mission as local law enforcement officers is to handle calls for service and to work with people in the community to improve the quality of their life in their neighborhoods and to have them help us deter and solve crime,” he said. “This bill will do just the opposite. This will send the community into hiding, and we can’t work without the community,” he said.

McManus, who went to Austin to testify against the bill, said he is not alone. “Every chief that I’ve spoken to across this state is opposed to this bill. We don’t need Austin telling us how to run our police departments,” he said.

Gloria Mora spoke on behalf of the grassroots community group C.O.P.S./Metro Alliance. “We ask Gov. Abbott to reject the ideologies of fear and scapegoating and to veto SB4. C.O.P.S./Metro Leaders refuse to give up a culture of hospitality and welcoming the stranger for the sake of inhuman law and order,” she said.

“In spite of the legislature’s and governor’s actions, we at C.O.P.S./Metro will work to make sure that San Antonio takes care of all of our neighbors by partnering with SAPD and the Sheriff’s department and by creating a legal defense fund for children of immigrants, by creating a city ID that will serve all residents, and by whatever means necessary,” she said.

State Sen José Menéndez (D-26) and State Rep. Diana Arevelo (D-116) each explained why they voted against the bill.

“For me this is personal. Personal in that we have an unnecessary law being presented to us in guise of public safety - which is ridiculous,” Menéndez said.

Arevelo said her vote reflected community values. “San Antonio does not submit to racism or discrimination. That’s not who we are. it’s not part of our culture. This bill is wrong. It doesn’t protect anyone. It makes everybody in this city vulnerable,” Arevelo said.

Bexar County Sheriff Javier Salazar said his jail houses 4,000 inmates each night and there are about 27,000 people in the county on any given day who have warrants out for their arrest. “The vast majority of those 4,000 jail inmates, the vast majority of those 27,000 people running around wanted in Bexar County are American citizens,” Salazar said. “They are not undocumented immigrants. That is not who’s committing crimes in Bexar County.”

Wolff said localities “are now being asked to enforce federal law that has no connection to crime on the streets. Undocumented workers pay income tax, local and property taxes, a majority have family members who are citizens. over 97 percent haven’t even committed a misdemeanor crime,” he said.

Bexar County District Attorney Nicholas “Nico” La Hood said the law could create conflicts of interest and legal headaches. “District attorneys around the state could find themselves in a position where they are defending the county they represent in a civil action, and at same time evaluating whether or not they should prosecute them for noncompliance of this statue,” La Hood said. “SB4 creates a slippery slope for us all.”

Abbott was unswayed by critics. On May 3 he Tweeted: “The Texas sanctuary city ban wins final legislative approval. I'm getting my signing pen warmed up.”

According to this Texas Tribune article, Abbott signed the bill Sunday night May 7 and streamed it on Facebook Live.

Editors note: This article was updated to reflect Abbott's actions after the news conference. 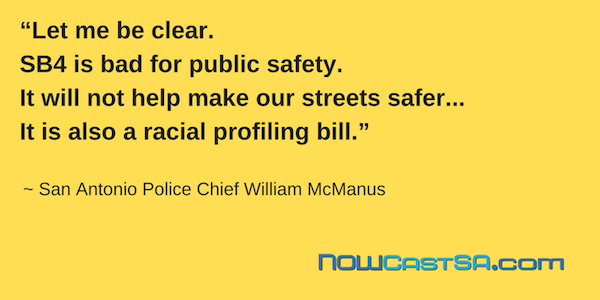