Video: San Antonio lights up the night with holiday displays

San Antonio prides itself on holiday lights. Some people don’t even take their Christmas lights down after the new year. They just flick a switch when the next Christmas rolls around to celebrate another season of holiday cheer.

For neighborhood lights on the Westside, visit the area around Navidad Street (after all Navidad means Christmas). You can see deer run around holiday lights on the Northside on Deer Run Street. If you are on the Eastside, do not miss the “Safari Through Windcrest". This whole neighborhood has a contest for the best holiday lights. And the Southside is lit up from Southtown to the Missions.

Mayor Ivy Taylor has issued the Light Up Downtown Challenge. The goal is to have all major buildings lit up to create an illuminated view of the downtown skyline. Tenants of smaller buildings are encouraged to decorate their facades at the street level as well. Prizes, from “Best Use of Space” to “People’s Choice,” will be awarded after voting ends on Dec. 20.

The Ford Fiesta De Las Luminarias takes place along the River Walk from 7 to 10 p.m. on Dec 15-18. Take your family for a walk along the river, enjoy thousands of traditional luminarias, and sing along with the Ford Holiday Boat Caroling.

The Holiday Lights along the River Walk is a world famous attraction. The Paseo del Rio downtown will be illuminated until Jan. 16.

Meanwhile, the Museum Reach has “The River of Lights” which features a “Deck the River” contest. Visitors can participate by visiting El Tropicano Riverwalk Hotel, The River House Apartment Homes, San Antonio Museum of Art, Wyndham Garden, or VFW Post 76 and vote online until Dec. 18.

Travis Park not only has Holiday Lighting until Dec. 30 but they are offering a variety of festivities. Holiday Play, Beauty Day, Food Trucks, and Fitness in the Park are just some of the events at this downtown park. Visit their website for details and scheduling information.

Watch the tree lighting ceremony from this year's celebration below:

"Merry & Bright and Wild at Night!" is the theme for the holiday light show at the San Antonio Zoo until Jan. 1. Zoo Lights begin at 6 p.m. every night. Visit their website for tickets and details.

The University of the Incarnate Word will feature “Light the Way” until Jan. 6. Driving through the beautiful campus at Broadway and Hildebrand has been a San Antonio tradition for 30 years.

Elf Acres Christmas Light Fest (1475 Grosenbacher Road) offers another type of drive-thru. Elf Acres will feature 20 acres of lights, animated displays, and other attractions for the family. They open at 6 p.m. each night until Dec. 30.

The “Christmas Celebration” at SeaWorld will treat visitors with millions of lights until Jan. 1. The “Holiday in the Park” at Six Flags Fiesta Texas is illuminated until Jan. 2. Morgan’s Wonderland will be glowing with lights during a “Wonderland Christmas” until Dec 23. Visit the websites for these theme parks for ticket prices and hours.

Retama Park features a “Holiday Magic Festival of Lights” from 5:30 to 11 p.m. each night until Jan. 8. Oriental lanterns and illuminated Chinese dragons are just some of the sights in Selma.

A different type of holiday light is the dim glow of the Winter Solstice. Celebration Circle will welcome the longest night of the year with “Underground Sounds” on Dec. 17, 7 to 9:15 p.m., at Cave Without a Name (325 Kreutzberg Road in Boerne). An eclectic concert of holiday music celebrating the Winter Solstice will feature contemporary arrangements of traditional carols, soaring vocals, original acoustic music and pulsing World-beat rhythms, performed on ancient and modern instruments. Part of the concert will be performed in total darkness and flickering candlelight.

The fireworks display on Dec. 31 at “Celebrate San Antonio 2016” is the largest free New Year’s Eve festival in the state of Texas. Three stages, located from the Tower of the Americas to the Arneson River Theater, will offer live music. Food booths and carnival games and rides throughout the area will entertain several hundred thousand of your closest friends from dusk until the pyrotechnics begin at midnight. Wind down the old year and start the new one with a blast. 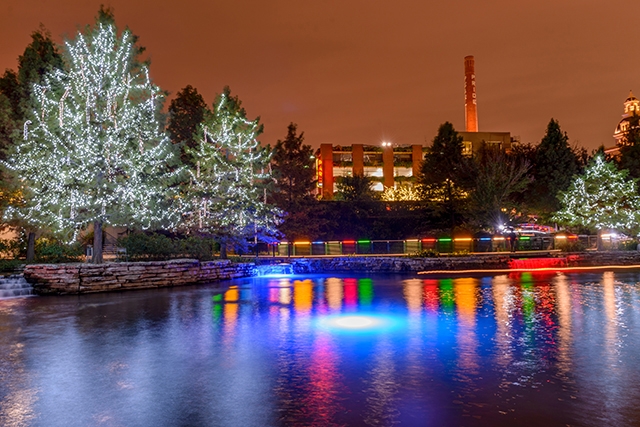