“We’re here today to give Sheriff Salazar a petition on behalf of Bexar County and the whole community... he has to protect everybody whether they are documented or not, they’re all part of his community that he has sworn to protect,” Romero said.

Sheriff Salazar was unable to attend the scheduled petition acceptance due to a meeting, according to Administrative Deputy Martin Meachum. Meachum accepted the petition in-lieu of Sheriff Salazar. The acceptance had been postponed from the day before.

“He [Salazar] moved the date to today under the assumption we would be able to meet with him directly, so this is anticlimactic but at the same time kind-of dodgy,” said Romero.

View a video clip of the press conference and a reading of the petition below.

The petition gathered 3,000 signatures in opposition of 287(g) which essentially forces law enforcements to act as Immigration and Customs Enforcement (ICE) agents.

Romero was detained by ICE in February. He has since been released of having to report to ICE in the future. While immigrating from Honduras at the age of four, Romero is protected under the Deferred Action for Childhood Arrivals (DACA) program. After being detained Romero feels he can have a voice for others that are either facing or have the fear of being detained.

“I still want to keep on fighting and want to speak on behalf of everybody that doesn’t have this voice and that can’t fight directly,” Romero said. .

Romero believes that 287(g) is specifically targeting immigrants. In the past month numerous roundups of undocumented immigrants have been occurring throughout the country.

One of President Trump’s notorious plans to reduce undocumented immigrants in the country is building a wall along the border of Mexico.

During President Trump’s first address to Congress he spoke of the Victims Of Immigration Crime Engagement (VOICE) office. The VOICE office is aiming to help persons affected by crimes committed by undocumented immigrants.

During Trump’s campaign he made several references to Mexican undocumented immigrants by calling them criminals. Although numerous studies have shown natural born citizens are more likely to commit a crime than immigrants.

View a small photo gallery from the press conference below. 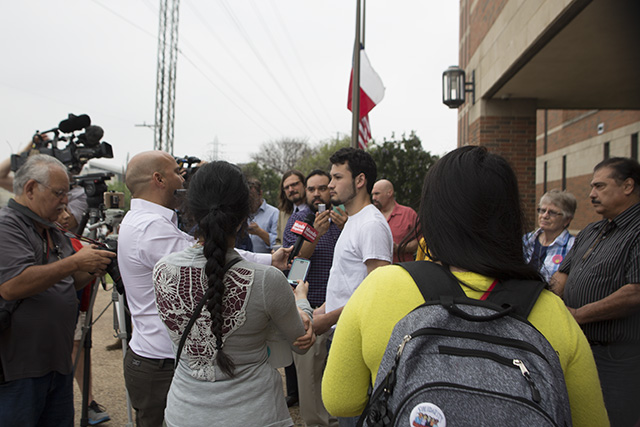 Other states are also feeling the impact of undocumented immigrant raids, also known as “fishing,” include California, Georgia, New York and Illinois.

Director of the Casa RAICES shelter, Jenny Hixon was present with Romero at the Bexar County Sheriff’s office and disappointed with Salazar’s absence.

“I think it’s unfortunate that he [Salazar] decided not to accept the petition himself...there are policies in our community that he’s voluntarily cooperating with, policies that rip our communities apart and he can expect our community to now hold him accountable for that,” Hixson said.

A call to BCSO spokesperson Rosanne Hughes confirmed Sheriff Salazar did receive the petition but was unable to give a comment on the matter.

**Cover Image: Jenny Hixon of RAICES speaks to Deputy Martin Meachum during a press conference outside the Bexar County Sheriff's Office. Photo by B. Kay Richter. 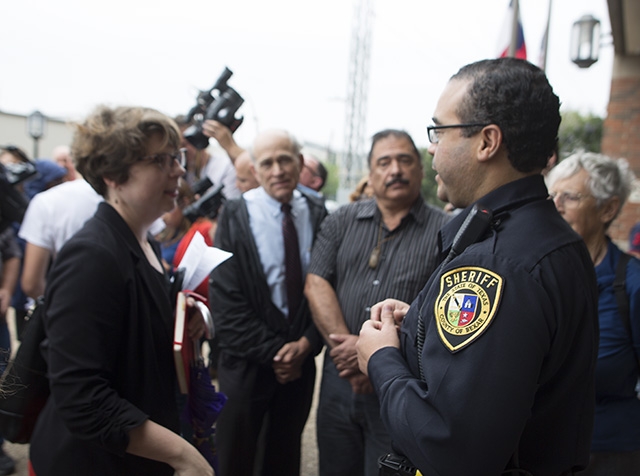