On Tuesday, Aug. 26 at the South San Community Center, Southwest Workers Union held a news conference celebrating the installation of "No Thru Truck" signs on Quintana Road and to push for continued shifts towards local, sustainable, community-led economies that support the wellness of Mother Earth.

The State of the Community Address is a people-based project to lift up the stories of residents in the community whose safety and health is being negatively impacted by business at Port San Antonio.

In the video, life-long South Side resident Sandra Garcia talks about living near Port SA's 1,900 acre industrial complex.  “Because of the increase in truck traffic ,we now have more diesel emissions going into the community,” she said.

Neighbors have observed an alarming increase in the truck traffic using the Port SA, facility as well as increased activity in the rail yard. While no risk or impact assessment has been shared publicly to guide decision-making, risk assessments from similar rail yard ports in the California cities of  West Oakland, Roseville and Commerce, and in Baltimore, Maryland have found significant health risks for nearby communities.

The Quintana Road neighborhood adjacent to Port SA is threatened by the truck and rail traffic, and if the growth in hydraulic fracturing in the Eagle Ford Shale continues, the risks have the potential to increase significantly.

Many of the trucks accessing the Port fail to use the General Hudnell on-ramp that was built specifically to transport hazardous materials and prevent traffic congestion traffic when Kelly AFB was transitioned to Port SA.  Many of the trucks have been short-cutting on Quintana Rd and New Laredo Hwy.  The dangers these trucks have brought into the community have not gone unnoticed.   After community members blocked traffic with their bodies on Quintana Rd February 13, to protest the truck traffic, City Council and South San Antonio Independent School District joined in the fight for safe neighborhoods by installing ‘No Thru Trucks’ signs and ticketing truck drivers.  An informal survey noticed a significant reduction (40 passing trucks in an hour to 2) since the installation of the signs and increased enforcement.

At the other end of the truck’s route, the Cerny family of Karnes City and their neighbors have been hit hard  by the fracking boom.  Mike Cerny remembers the time he heard a strange noise outside of his house and went outside to see a 400-gallon plastic tank, like those used at drilling sites, flying in the air as the truck it was riding on sped down the road. Because of the dangerous truck traffic, his wife, Myra Cerny, and ther 15-year-old son, Cameron,  no longer feel safe going on country walks or bike rides.

Cameron Cerny is suffering from nosebleeds and said he worries about what is in all the smoke he sees near his home. The family said they regularly find dead animals on their property and had to put their dog down after he developed a tumor and a rash that wouldn’t go away. The family laments that their dreams of getting away from the noisy bustle of the city ten years ago have turned in to the nightmare realization that “It’s not if you’re going to get sick, it’s ‘you’re going to get sick.' " 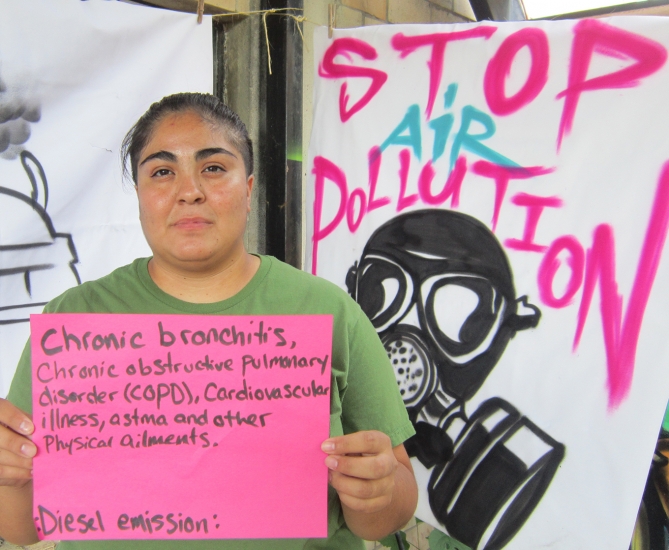