Video: Trinity professor looks at housing and neighborhoods through an equity lens

When he created the Task Force, San Antonio Mayor Ron Nirenberg said he wanted the panel to develop a framework for a comprehensive and compassionate housing policy that addresses pressing challenges including availability, affordability, gentrification and displacement.

Drennon, Director of the Urban Studies program at Trinity, told the Task Force at its first meeting that accessible housing is a critical community need.  “Housing is a catalyst, housing is a catalyst towards opportunity,” she said as she highlighted ways housing can help communities make progress. (Watch full video of her Oct. 3, 2017 presentation, "Housing and Neighborhoods Through an Equity Lens," here: https://youtu.be/DM10bhhn-RM?t=27m46s.)

Drennon said affordable housing is essential for children to succeed in school, for the physical and emotional health of families, for safer streets and for the accumulation of wealth.

Children are six times more likely to succeed in school if their housing situation is stable, Drennon said. When families move from home to home, she said, it contributes to behavioral and emotional problems as well as increased pregnancy rates and accelerated initiation of drug use, she said.

Stability also brings safety, she said. When neighbors know and trust each other, that leads to safer communities with lower levels of violence.

And housing is about wealth.  “The ability to accumulate wealth in the American society is very much based on our house,” said Drennon as she showed that those with stable housing situations could accumulate greater amounts of wealth.

She cited a 2011 study written by the public policy group, Demos on the wealth gap in America. The study showed the median net worth of a white household was $111,146 in 2011, while the median net worth for a black household was $7,113 and $8,348 for a Hispanic household. The  Demo report found the gap was driven by public policy decisions. “Eliminating disparities in homeownership rates and returns would substantially reduce the racial wealth gap,” the report said. (Click here to learn more http://www.demos.org/publication/racial-wealth-gap-why-policy-matters)

Drennon said housing has two values, a use value and an exchange value, both of which are important in the conversation on housing.

The “exchange value” is transactional, based on a home’s monetary value. A house can be sold to finance retirement, or it can be collateral to finance a child’s college education.

A Legacy of Racism and Redlining

The city is not a blank slate, but rather “one that was built up over a long period of time and under very different conditions,” Drennon said.

She talked about the history of the city’s North, South, East and West sides.

Holding up Beacon Hill as an historical example, Drennon showed an original deed that included a shocking requirement to buy in the area: “Any person of Negro blood would be immediately rejected,” the deed said. Drennon read from another deed in another northern plat that blocked Hispanics as well as African Americans from living in the area. The houses “should never, in any circumstances, any portion, be sold to anyone of Mexican or Negro blood,” the deed said.

The trend continued in the East Side, Drennon said, showing deeds that prohibited all but Caucasians from living in the area.

Drennon showed the ethnic and cultural differences between housing areas that were densely populated versus those that were not. Dense areas had diverse populations, including Hispanic families, African American families and Chinese families. Drennon said these densely populated neighborhoods are the most vulnerable because residents include the disadvantaged. These neighborhoods are in danger of being torn down and replaced with commercial development.

Drennon said restricting ownership and residence by race became unconstitutional in 1948, but by then, neighborhoods and the patterns of segregation had already taken root. Whites were able to build on larger plots and had fewer restrictions, allowing them to accumulate wealth faster. Meanwhile African Americans and Hispanics had to build smaller homes in dense populations which didn’t allow for the same rate of wealth accumulation.

Drennon provided a map overlay that showed how the federal government had advised investors on certain areas of San Antonio, “the smaller housing stock, the non-white neighborhoods are redlined, and thus denied investment.”

Drennon showed an infographic with data from 2015 about personal wealth. “Those folks in the redlined neighborhoods, have never been able to accumulate wealth,” said Drennon, referring to those that are still affected by the segregated housing lines drawn almost 100 years ago.

Will Diversity Succumb to Inequity?

Diversity is key for a prosperous population, and a prosperous city, Drennon said. She held up Mahncke Park as an example of equity in development. Roughly bounded by the Botanical Garden, the Witte Museum and University of the Incarnate Word, Mahncke Park is a mixed income neighborhood, and has an elementary school attended by children from low income households and high income households.

But the area is changing dramatically. Drennon said. The landscape is being pushed towards inequity and inaccessiblity. “The four-plexes are being demolished,” she said, showing a photo of small, new single-family homes being built in their place. “These are selling for $300,000,” she said.

Drennon said she wants San Antonio to return to its core values: “The mission of the city itself is prosperity and prosperity for all.”

She concluded by showing a photo of herself in Rochester, New York. “That’s my neighborhood, that's where I grew up. It's about neighborhoods,” she said.“That's why we hold onto old pictures of our neighborhood because it contextualizes us.” 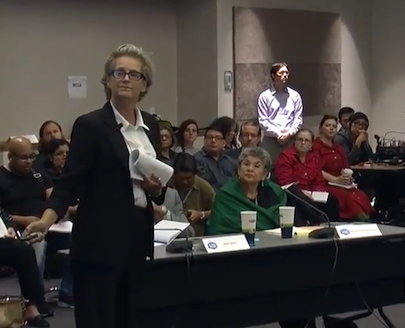