The San Antonio regulation that Uber rejects was co-authored by executives of the ride-hailing service, according to top city leaders who negotiated and drafted the ordinance.

In late February, after the city and Uber reached agreement on all points, an Uber attorney was invited in to help write the language in the amended ordinance with two attorneys representing the city. “They (Uber) were a part of that process,” Treviño said.

Uber does not dispute that while high-ranking Uber officials helped create and endorsed the new rules in private meetings with the city, the company waged a public campaign to denounce the amended ordinance.

Asked for comment, San Antonio Uber spokeswoman Debee Hancock, emailed a statement that does not address the company's about-face: "Since the San Antonio city council first adopted their onerous regulations last December, we made it abundantly clear that we would not stay in the city unless they fully repealed the duplicative background checks and insurance requirements that do nothing to further protect riders and drivers. We conducted tv, radio, and print interviews to communicate the urgency of the situation and asked riders and drivers to contact their local officials to do the same. Insinuating that we inappropriately influenced this process ignores the reality and gravity of the situation in San Antonio."

(Scroll down to read more)

Watch how Treviño and Taylor describe the matter in this video, produced by NOWCastSA Journalist Clayton Price. This story was reported in partnership with Texas Public Radio:

Treviño said he initiated and led the talks - with support from the mayor - after the controversy in December 2014 when city council first adopted regulations to legalize Uber and Lyft, companies that let people use smartphone apps to book and pay for private car service.

“We sat down in a room for several days, for long hours,” he said. “We began just going through (the old ordinance) line by line. This was truly a joint effort."

The city agreed to Uber’s request to drop the pre-employment drug testing in favor of random drug testing after Chief Treviño agreed it would be more effective.

At Uber’s request, the city clarified language on vehicle inspections, removed the English-proficiency requirement and, with advice from USAA, reduced the insurance requirements.

“We rolled back just about everything in the original ordinance,” Treviño said.

But there was one requirement no one would yield to Uber: The 10-fingerprint background check that is also required of taxicab drivers, pedicab drivers, school teachers and even architects such as Councilman Treviño.

Only with 10-fingerprint background checks would local authorities be notified quickly if a driver is charged with a major crime, Chief Treviño warned.

Only a 10-fingerprint background check would ensure that the driver is not stealing someone else's identity, said Mayor Taylor. (watch her comments in the video)

While Uber prefers to use a private company to screen drivers by Social Security number, Houston officials found Uber’s screening missed crimes ranging from aggravated robbery to DWI, indecent exposure, assault, battery, fraud and identity theft, according to this article in the Houston Chronicle.

San Antonio stood firm on the background check requirement, but agreed to give Uber drivers a 14-day grace period after starting work to go to one of five locations to get fingerprinted, a digital process that takes about 15 minutes and costs $45.

With agreement reached on the last issue, Councilman Treviño said. “We got up, we shook hands.”

Uber then flew in its San Francisco-based Policy Counsel - Steven Siger, a former U.S. Justice Department attorney - to meet with San Antonio Assistant City Attorney Jim Kopp and with Jed Maebius, an attorney who is Council Aide to Treviño.

“They sat in a room, the three of them, and wrote the language that is the amendment today,”  Treviño said. “So they (Uber) were a part of that process.”
“When all that was written … at the 11th hour as we’re coming in for a council vote,” Treviño said, Uber representatives were “in the newspapers saying ‘this is way too onerous.’ "

Those comments, he said, "almost did wreck the vote," although council on March 5 passed the amended ordinance that Uber helped write.

Why did things sour?

Mayor Taylor said the “deal-breaker” was the 10-print background check, which the company agreed to use in cities including Houston. “Uber folks said to me, ‘It was a bad idea for us to agree to use it in those cities, so we’re not going to agree to do it in San Antonio,’ “ said Taylor.

"Ultimately," Treviño said, "you can see now that really what they’ve done is they decided to move their efforts to the state level."

But even in the Texas Legislature, the mayor said, the company is being peppered with questions about why it wants to avoid 10-fingerprint background checks for its drivers.

Treviño said he sincerely hopes Uber comes back to San Antonio. “But  they have to follow certain lines of regulation that they agreed to -- that they co-wrote.” 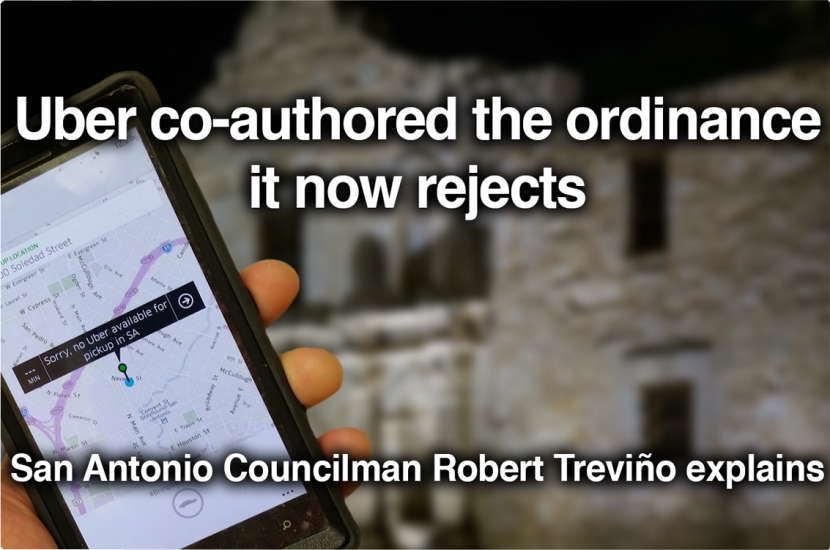