Joe Miraglilo sings four days a week at Durty Nelly’s Irish Pub on the San Antonio River Walk. His repertoire extends from ’50s to current hits. “It’s not uncommon for me to sing five or six Journey songs in a row, followed by Def Leppard and Bon Jovi,” he said. “People love to hear Journey on the piano.”

The piano bar is a happening place over the holidays, and this past season was no exception. “The Friday and Saturday night of the Alamo Bowl I had huge crowds, but I knew something was wrong with my voice,” Miraglilo said.

Ten years after having a vocal cord nodule removed in another city, he rightly suspected that the hoarseness and tone problems in his voice would not go away without help.

Online, Miraglilo learned about C. Blake Simpson, M.D., of UT Medicine San Antonio and booked an appointment. Dr. Simpson, a fellowship-trained otolaryngologist, told Miraglilo about a minimally invasive vocal cord procedure called pulsed KTP laser treatment. Dr. Simpson has treated at least 350 people with this therapy, which uses a laser to halt blood flow to vocal cord growths. The procedure is performed under local anesthesia. Without circulation, polyps and precancerous lesions shrivel and disappear. This frees the vocal cords, which are like guitar strings, to vibrate and oscillate normally to produce a healthy sound.

The pulsed KTP laser is found almost exclusively in academic centers. Only one other center in Texas has one, Dr. Simpson said. UT Medicine is the faculty practice of the School of Medicine at the UT Health Science Center San Antonio, where Dr. Simpson is a professor of otolaryngology - head and neck surgery.

30 minutes in the clinic

Before the technology’s introduction several years ago, patients such as Miraglilo with polyps, precancerous tissues or other vocal cord conditions were taken to the hospital operating room, where a metal tube was inserted into the mouth to dissect the tissues under full anesthesia. Surgery lasted a couple of hours, and recovery time was six weeks. By contrast, pulsed KTP laser patients are fully awake during the procedure, which is done in 30 minutes at the otolaryngology clinic in the Medical Arts and Research Center (MARC) on Floyd Curl Drive. Patients experience no pain and are fine to drive afterward. “The only thing patients can’t do after the procedure is talk, because we put them on voice rest for five days,” Dr. Simpson said.

The pulsed KTP laser is the same type that was used to treat British singer Adele. During the procedure, a tiny fiber is threaded through a flexible scope in the nose and guided into the throat. The scope includes a camera to enable ultra-high-resolution imaging of the vocal cords. The laser emanates from the fiber and acts only on the color red, targeting blood vessels. The laser doesn’t work by burning but is gentler, disrupting the structure of the blood vessels so that they implode or collapse. By the patient’s first or second post-operative visit, polyps or other growths are gone. Miraglilo’s polyp disappeared by his last visit.

“This is safe and effective; we’ve never had a serious complication,” Dr. Simpson said. “This is, without a doubt, hands down, the most exciting technology that has come along in my 17 years of practice.” He leads The University of Texas Voice Center, which treats vocal conditions affecting patients from all walks of life. The UT Voice Center is part of UT Medicine.

Insurance usually covers the procedure, which reduces costs by eliminating the need for intravenous (IV) lines, medications and a recovery room.

“It takes longer to numb the throat with sprays than it does for the procedure itself,” Miraglilo said. “I was back singing full time after a few weeks. My last operation, I was out of work for five months.”

Miraglilo is thankful that he found the Voice Center on the UT Medicine website. “I’ve got my full range back, a four-octave range,” he said. “The highest song I have to sing is ‘Dream On’ by Aerosmith. Toward the end of the song, he’s (Steven Tyler’s) way up there.”

Miraglilo is a recording engineer who works out of his studio at home when he’s not at Durty Nelly’s. He follows a vocal coach’s routine of an early morning warm-up of his voice and a post-gig warm-down.

“Dr. Simpson was my savior,” he said. “He basically gave me my career back.”

For more information about this voice-saving procedure available through UT Medicine San Antonio, call The University of Texas Voice Center at (210) 450-9950. 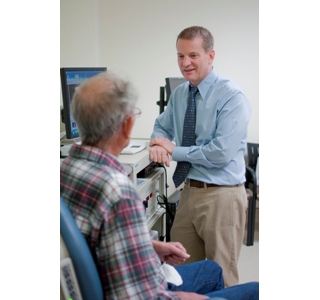 Shared by School of Medicine