Update/Changeup: Due to the weather, we were not live on March 15 for Affordable Care Act (ACA) Enrollment and Resource Fair presented by West San Antonio Chamber of Commerce and Congressman Lloyd Doggett at El Progreso Hall, 1306 Guadalupe St. Video of the event will be posted as quickly as possible.

Disclosures: NOWCastSA is a member of the West San Antonio Chamber of Commerce. In the past year, NOWCastSA has received financial or in-kind support from AVANCE, CPS Energy, San Antonio Public Library and the UTSA College of Public Policy. 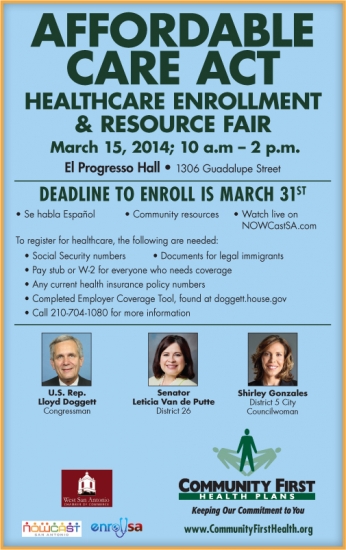