Watch video as Democratic members of Congress hold an immigration forum at the U.S. Capitol on March 29, 2017, from 2 p.m. to 4 p.m. Eastern time, to discuss the impact of Trump administration immigration policies on children and families.

Organizers said the forum will focus on the harm of separating children from their parents, whether those separations occur at the U.S. border or within the United States. Although such separations were rejected by the Obama administration, Homeland Security Secretary John Kelly told CNN he is considering separating refugee children from parents to deter others from making the dangerous journey from Central America.

Among the speakers will be Los Angeles Mayor Eric Garcetti and House Democratic Leader Nancy Pelosi, along with Congresswomen Lucille Roybal-Allard of California and Pramila Jayapal of Washington, who Co-Chair the Women’s Working Group on Immigration Reform and Congresswoman Sheila Jackson Lee of Texas. (See the NOWCastSA story and video from 2015 when Rep. Joaquin Castro of San Antonio hosted Roybal-Allard, Lee and other members of Congress on a visit to South Texas to see asylum-seeking mothers and children being held in private prisons.)

Panelists at the event include Ashley Feasley, Director of Migration and Refugee Services at the U.S. Conference of Catholic Bishops; Dawnya Underwood, LGSW, Director for Children’s Services at Lutheran Immigration and Refugee Service; Emily Butera, Senior Program Officer for Migrant Rights and Justice at the Women’s Refugee Commission; Sameera Hafiz, Advocacy Director at the National Domestic Workers Alliance and We Belong Together Campaign; and Dr. Lanre Omojokun Falusi, MD, FAAP, Immediate Past President of the District of Columbia Chapter of the American Academy of Pediatrics and Associate Medical Director of Municipal and Regional Affairs at the Child Health Advocacy Institute.

Watch a webcast of the forum here: 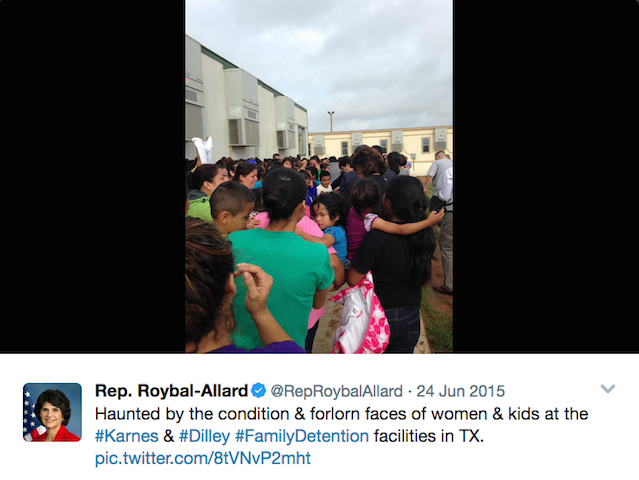