REPLAY VIDEO: From the webcast of a COPS/Metro Alliance assembly to expand its living wages and economic security campaign and commemorate more than 40 years of organizing in San Antonio. The event was Saturday, April 30, 2016, from 3 p.m. to 4 p.m. at the Thomas Edison High School Auditorium.

NOWCastSA donated its services so you could watch live or replay the video later for free, right on this page.

During the assembly, local and statewide leaders commemorated the legacy of the organization and the accomplishment of their leaders.

The group also held an action, in which San Antonio City Council members and San Antonio Independent School Board members agreed to raise their employees' lowest wages to $14 per hour.

Since the group launched in 1974, COPS/Metro leaders say they have directed more than $2 billion into improving their neighborhoods and ensuring that a safety net exists for the most vulnerable in our communities.

“We are proud that over the past 20 months, the city, county, and hospital district have followed our recommendation to increase wages to $13/hour, and that the SAISD board of trustees also voted to increase their entry level wages from $10.03 to $12/hour,” co-chair Maria Tijerina said in a statement.

“But now is not the time to rest on our laurels. I have met mothers that work two, sometimes three jobs and still struggle to make ends meet. At our action on Saturday, we will ask our city and county elected representatives to increase wages to $14/hour for the next fiscal year.”

City of San Antonio Council members, Bexar County Commissioners, and SAISD Board of Trustees attended and particiapted in the event. COPS/Metro leaders will commit to expanding this living wage campaign to contracted workers, as well as other local school districts. 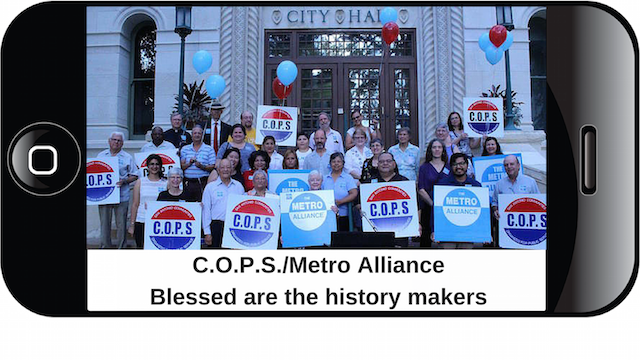