REPLAY VIDEO: Join NOWCastSA at 8 a.m. on Tuesday, May 13 for the live webcast of the West San Antonio Chamber of Commerce's Council Series Breakfast with District 7 Councilman Cris Medina.

Thanks to underwriting from the West San Antonio Chamber of Commerce, you can watch the webcast right here on this page, live or later.

Originally scheduled for April 15, the event was moved to May because of the Councilman's recent Temporary Duty Assignment (TDY) with the United States Air Force Reserve.

"This is a completely understandable scheduling issue, and we are glad to move the event.  In addition to his dedicated service to the residents of District 7, we absolutely applaud the Councilman for his service to our great Nation as an Officer in United States Air Force," said West Chamber President Gabe Farias.

This is the third and final event in a series that included District 5 Councilwoman Shirley Gonzales and District 6 Councilman Ray Lopez. 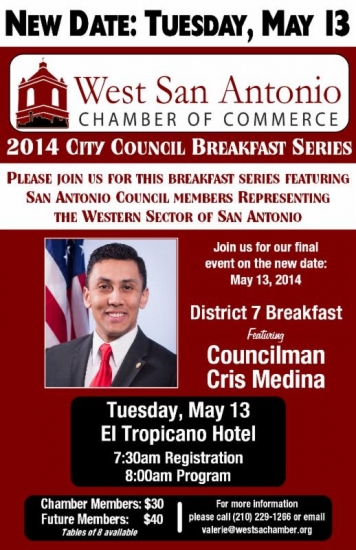