Thanks to the underwriting support of the 80/20 Foundation, the webcast video is archived here so you can replay it later.

Geekdom member Peter French put together these SketchNotes from her talk.

Christie St. Martin was born in Bermuda, and educated at two Canadian universities which would prefer not to be mentioned here until she supplies them with healthy building endowments.

An uber-geek and proud of it, she established herself as an internet presence with All Things Christie, a blog that managed, with its quirky and unabashedly self-indulgent links to and commentary on whatever struck her fancy or her ire, to attract small legions of readers, fans and would-be stalkers. Her interests were as they are: myriad and eclectic, though certainly given to a particular fondness for the tech-y, the game-y and the kitszchy. She has since written and managed VH1's Best Week Ever website.

The Los Angeles Times gave her own blog and she contributed to the LATimes' Hero Complex ( a Sci-Fi/Comics blog), where she always provided her usual melange of cheek, snark and occasional observation. She would later go on to work for Syncapse where she managed clients like J.P. Morgan Chase and Loreal's social platforms to help grow, curate and build their online presence.

Christie is the co-founder of two mobile applications being launched in 2014 and is very proud to be the team lead of community development and digital strategy for HeroX. She is her own organizing principle, a kind of mad surfer on the crests of cultural lunacy, alternately acerbic and couldn't be more ecstatic to be in San Antonio.

The Master's Series:
Have you ever wanted to learn from a Jedi master? As a startup how should you do accounting, sales, hiring, or branding? Most startups don't have access to professionals that are experts in a specific area. Geekdom is solving this problem by bringing in the heavy artillery in The Master Series. Speakers sharing their wisdom with community will be experts in areas like NPS, sales, customer service and branding.

If there is an area you would like included, email ryan@geekdom.com with your suggestions. 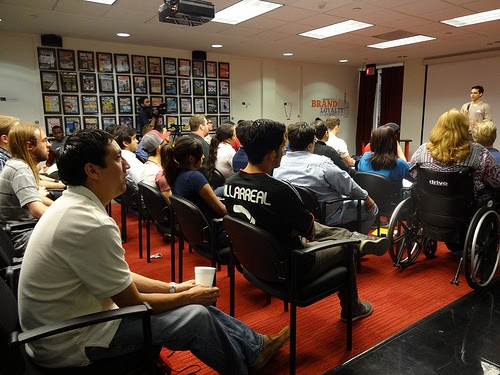