Join NOWCastSA and the League of Women Voters at the University of Texas San Antonio College of Public Policy for a Candidate Forum Webcast on Monday Oct. 13, 2014 at 5:30 p.m.

The Candidate Forum will include candidates in the Nov. 4, 2014 election for Bexar County Judge and for Bexar County District Attorney. The moderator will be Phyllis Ingram, President of the League of Women Voters of the San Antonio Area.

You can help by donating to support NOWCastSA's webcast of this event so anyone can watch live or replay the video in its entirety later.

Besides the UTSA College of Public Policy and the League of Women Voters of the San Antonio Area, co-hosts of the event include the UTSA Student Government Association, Alpha Phi Sigma Criminal Justice Honor Society and the Public Administration Student Organization.

The forum is designed to inform the public about the issues, the candidates and their positions and encourage increased voter participation.

Click here for NOWCastSA's Voters Guide to the November election. Click here to get a mobile-friendly early voting map. 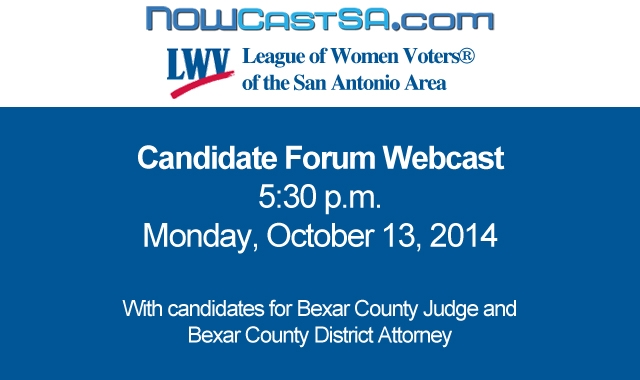