Webcast: Mayor Julián Castro and the Future of Downtown

REPLAY VIDEO from NOWCastSA's webcast of Mayor Julián Castro's Centro San Antonio address on the future of our center city on Thursday, July 10, 2014.

The event included performances by YOSA and the launch of the Julián Castro Future Urban Leaders Scholarship Program, which will award a $5,000 scholarship to a San Antonio high school student who has committed to attend a local college or university and study Urban Planning, Public Policy or a similar program. The first scholarship is jointly funded by Centro San Antonio and the 80/20 Foundation, and will be awarded in the Spring of 2015.

The webcast was presented by Centro San Antonio and sponsored by Community First Health Plans. Thanks to their support, the video is available for replay here: 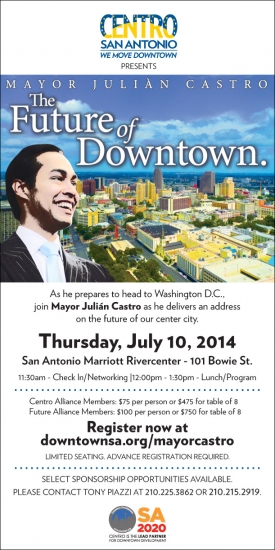