REPLAY VIDEO: San Antonio Poet Laureate Laurie Ann Guerrero read from her book A Tongue in the Mouth of the Dying and discussed the art and craft of poetry  from 6:30 p.m. to 8 p.m. Tuesday, April 22 at Central Library, 600 Soledad. NOWCastSA webcast the event for anyone to view live or come back and replay later right here on this page.

“Following in the footsteps of Carmen Tafolla will not be easy, but Laurie Ann Guerrero is an inspiring choice who will amplify the importance of literary arts in San Antonio. Her personal story and professional success will resonate with many San Antonians,” said Mayor Julián Castro in a news release. 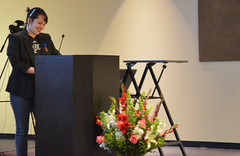 Nominations for the 2014-16 poet laureate began in November 2013 and a selection panel comprised of writers from around the country selected Laurie Ann Guerrero from a pool of seven of nominees. Guerrero was nominated twice; one nomination was by Linda Harris, a writer and Guerrero’s composition instructor at Palo Alto College who encouraged her to apply to Smith College.

Laurie Ann Guerrero, a 1996 graduate of McCollum High School, was born and raised in the South Side of San Antonio. Several years later, and after becoming a wife and mother of three, Guerrero was accepted as a “nontraditional student” to Smith College where she graduated with a degree in English language & literature. She went on to complete an M.F.A. in poetry from Drew University in 2011.

Guerrero’s chapbook, “Babies under the Skin,” won the Panhandler Publishing Award, selected by Naomi Shihab Nye. In 2012, she won the Andrés Montoya Poetry Prize for her first full-length collection, “A Tongue in the Mouth of the Dying,” which was then published by the University of Notre Dame in 2013. 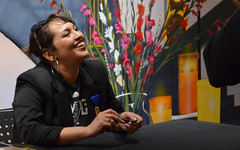 Guerrero says, “I have written in an unfiltered way since I was little.” In response to being selected as the next poet laureate, she says, “It’s a huge honor and I look forward to how I’m going to grow and be a vessel for the community. I feel ready, supported, and excited about what lies ahead.”

San Antonio’s new poet laureate will be participating in a number of local national poetry month events. The Department for Culture & Creative Development, in partnership with local poets and community organizations, has produced a calendar to capture all the poetry events taking place in San Antonio during National Poetry Month. Printed calendars are available at the main and branch libraries or go to npmsa.com for the online version. 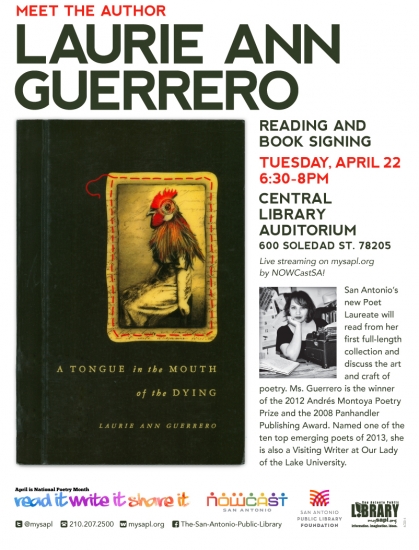