REPLAY the Video of the live webcast of our monthly Noche Azul concert as Azul pays honor to the brave souls of Ayotzinapa’s 43 student teachers who lost their lives while fighting for better conditions. Concert was held at the Esperanza Peace and Justice Center on Nov. 15, 2014.

On September 26, 2014, 43 rural student teachers from Guerrero, Mexico disappeared. Before their disappearance, a large group of students visited the city of Iguala demanding better conditions for rural schools in Guerrero leading to a violent confrontation with the police. Forty three students were arrested and were never seen again.

Recent investigations revealed that shortly after the arrests, the police handed over the 43 students to the Guerreros Unidos, a local crime syndicate. The investigations also led to the discovery of numerous scandals involving public officials such as the mayor of Iguala, his cartel-aligned wife, the resignation of the governor of Guerrero, and the disappointing statement from Mexican attorney Murillo Karam stating he was too tired to continue with a press conference about the status of the missing students.

From Karam’s insensitive statement comes the outcry of #YaMeCanse. Loosely translated, this phrase means I am tired or I am fed up. Protestors have gravitated towards this phrase as a way to declare their own discontent with the continuos abuse, neglect, and disrespect towards the people of Mexico. Other groups around the world have joined in declaring their own disgust at the mistreatment of people by government officials, cartels, corporations, and other abusive entities.

Every day more people demand a stop to the violence that plagues our communities from Ferguson to Palestine and Guerrero. Join us for one night of peace as we pay tribute to the courageous souls fighting for justice for the victims of Ayotzinapa.

Esperanza and Azul invite the San Antonio community to denounce the inhumane acts inflicted upon communities around the world, including Ayotzinapa. 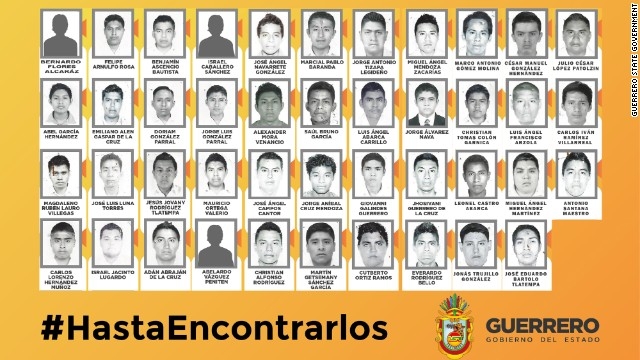