Webcast: San Antonio and the Legislature - a preview of the 85th

The Texas Tribune is pleased to present a series of events focusing on the issues at play in the run-up to the 85th Legislature — and what they mean for one of the state’s largest and fastest-growing cities and its surrounding communities. Join us in person or on our livestream for the third and final installment of this series: a conversation about public education, immigration, health care, spending and taxes, and other consequential matters with state Sens. Donna Campbell and Carlos Uresti. Tribune Co-Founder and CEO Evan Smith will moderate.

Campbell, R-New Braunfels, has represented Senate District 25 since 2013. She serves as chairwoman of the Senate Veterans Affairs & Military Installations Committee and sits on the Administration, Education, Health & Human Services, and Intergovernmental Relations committees. In 2013, then-Gov. Rick Perry appointed Campbell to represent Texas on the Southern Regional Education Board’s Legislative Advisory Council. She is also a physician.

Uresti, D-San Antonio, has represented Senate District 19 since 2006. He serves as vice chairman of the Senate Administration Committee and sits on the Finance, Health & Human Services and Natural Resources & Economic Development committees. In addition, he works in a private practice with The Uresti Law Firm in San Antonio. Previously, Uresti served nine years in the Texas House.

The conversation will also be livestreamed at texastribune.org/livestream (starting at noon), and the video will be accessible for viewing afterward.

The "San Antonio & the Legislature" series is sponsored by USAA, AT&T, The Boeing Company, Silver Eagle Distributors and Southwest Airlines, the official airline of Texas Tribune Events. The series is hosted by The University of Texas at San Antonio and media support is provided by The Rivard Report. Tribune events are also supported through contributions from our founding investors and members.

Disclosure: Though donors and corporate sponsors underwrite our events, they play no role in determining the content, panelists or line of questioning. 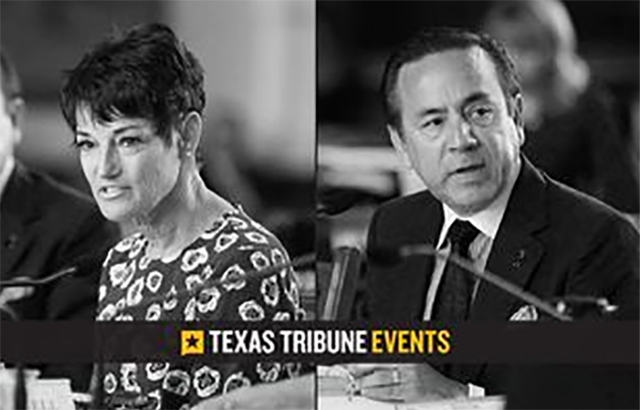