Thanks to support from Clarity Child Guidance Center you can replay the video later right here on this page.

When children suffer from serious physical illnesses, their families often get support from friends, neighbors and others in the community. However, when children face mental illness, their families are frequently met with silence from those close to them. The stigma attached to children’s mental health is just one of the topics that will be explored at the TEDxSanAntonio Salon on Children’s Mental Health.

This fast-paced, informative salon will feature insights from local people at the forefront of children’s mental health. A group of parents will discuss the challenges of helping their children in a panel discussion called “Where are the Casseroles?” Experts from the University of Texas Health Science Center San Antonio, Our Lady of the Lake University, Southwest Psychiatric Physicians and the San Antonio Police Department’s Mental Health Unit will present information on helping children with mental illness. Presenters will also share information to help parents learn more about their children’s mental health, such as a pediatrician checklist approved by the American Medical Association for use in wellness checks, and how parents can help guide their school district’s approach to mental health.

Interactive exhibits will offer attendees a chance to directly participate in the discussion, including a Guided Writing Display Wall and Tableau Presentations, or “living pictures” staged by actors that the audience can direct to change the outcome of the action.

The salon will also include showings of previous TED Talks relating to children’s mental health, including one by blogger and educator Liza Long. Long appeared at the 2013 TEDxSanAntonio event to discuss her essay “I am Adam Lanza’s Mother,” which sparked a national discussion about the challenges facing children with mental health disorders and their families. Long also presented at a One in Five Minds event in October 2013 (click here to replay video).

All the exhibits at the TEDxSanAntonio salon will communicate one message: that mental illness affects all of us, and we all have the power to take action.

The event takes place from 1 p.m. to 4 p.m. at Morgan’s Wonderland, 5223 David Edwards Drive. Doors open at 12:30 p.m. The salon is presented by TEDxSanAntonio with support from One in Five Minds, a regional campaign to help eradicate the stigma surrounding mental illness in children and improve access to treatment.

Proceeds from the salon benefit TEDxSanAntonio, an official TED licensee, and an all-volunteer organization that brings “ideas worth spreading” to the San Antonio community through thoughtful and innovative talks during its annual conference and other events. TEDxSanAntonio is one of the largest and most watched TEDx events around the world. 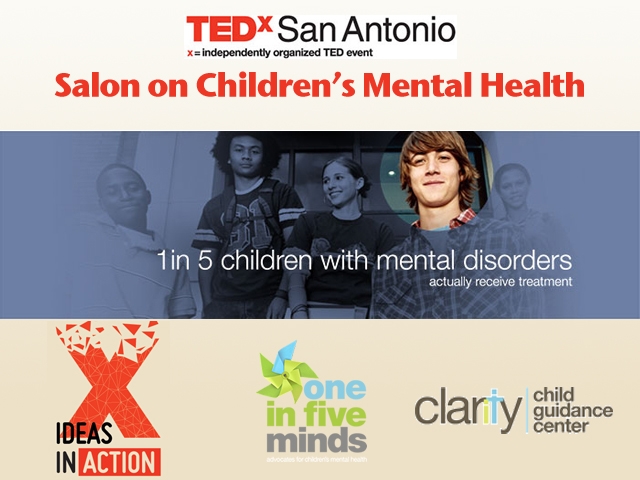